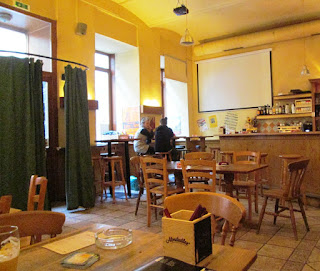 When the cafés and bars in Vienna start hanging velvet curtains in the doorways to stop the draft from blowing in, it's time to head home.
Not that Montreal is any warmer, but at least I have warmer clothes at home. 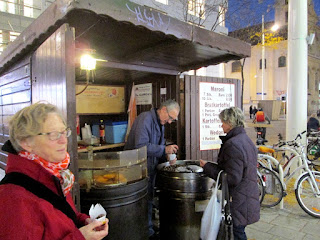 A last walk past the cool windows displays, often with the owner's dog in patient or resigned--certainly obedient--attendance. 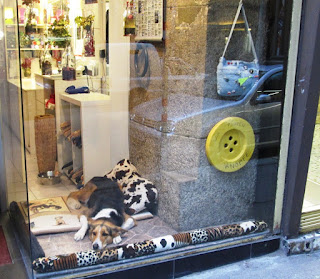 Eavesdropping on some last intense conversations in which politics, philosophy, art, refugees, and I'd-better-get-going-because-my-little-girl-is-waiting-at-daycare are being discussed. 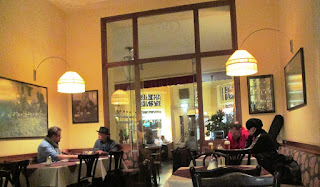 A few last sketches, though I don't know if he realized he was sitting under a poster for an exhibition called To Draw To Draw. 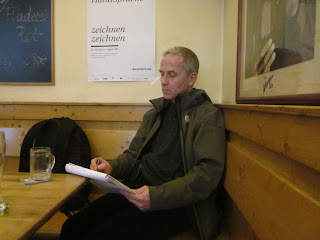 A last visit to the Institute of Conservation where I had spent time doing research for a new novel. I was asked not to take pictures of the objects being restored. The glass case you can just see bottom right contains the wooden clogs of a 15th-century saint. The clogs will be cleaned and placed in the older case which is believed to have originally housed them. It, too, needs to be cleaned with sponges, tweezers, brushes (and a cell phone?) of several centuries of dirt. 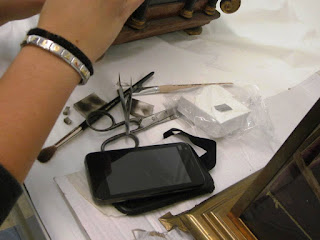 In the evening we had a stroll and a traditional meal of Kümmel-Schopfbraten with Knödel und Kraut in a Viennese Beisl--the Austrian word for a Gasthaus. Beisl translates as a little bite, though the little bite you'll get here will see you through a few hours of scything hay on an Alpine slope.
What I loved about this place were the wood-panelled wine refrigerators--in honour of which I had a glass of Prosecco. 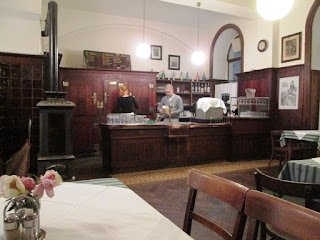 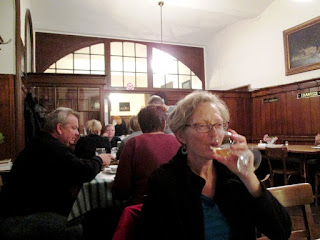 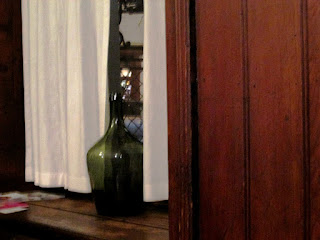 There will be more blog posts about Austria once I'm settled again.
Posted by Alice at 12:31 PM