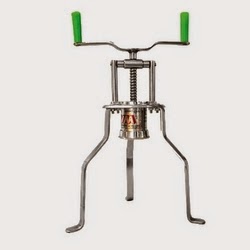 Three guesses what this can do.

I'll give you a hint: it's not used during surgery.

Another hint: I have a friend who can do what this does using a wooden gadget.

It doesn't push corks into wine bottles, though I've seen wine-bottle-corkers that look like this.

It doesn't ambulate. It's not a robot. No artificial intelligence hidden in those levers and handles.

But there are moving parts that rotate in circles.

If you stereotype genders--I called my friend a he--you might not expect that this is an implement for cooking. Here he is using his wooden press. 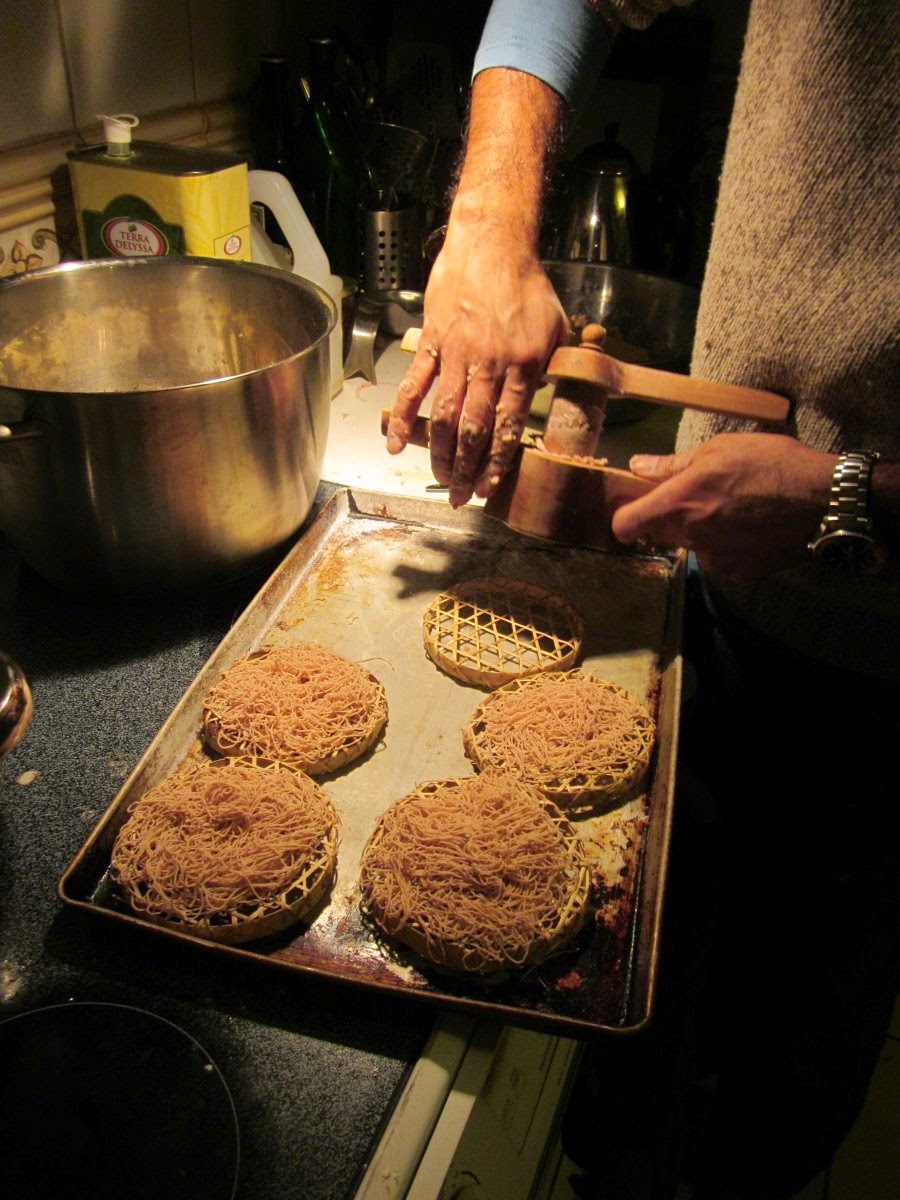 He's making individual nests of pasta called stringhoppers--or idiyappams, which is what his Sri Lankan parents call them. There are other names throughout south-east Asia where they're served in a variety of ways.

The dough is made of red rice flour. It's forced through a press to make noodles that are twirled onto baskets which are set inside a larger basket then steamed.

I apologize for the angle, but you get the idea:


He was telling me how his mother always made extra so they could have them in the morning for breakfast with sugar. He wants his boys to have this experience too--the idiyappam experience in general, idiyappam leftovers with sugar for breakfast. But the boys clamour for sugar the moment they see them. Forget waiting till breakfast.

The adults ate them with curry. They were delicious. A delicacy. But labour-intensive, which explains the attempt to invent a machine that forces out noodles it swirls into nests.

Made in the machine, would they be as good though? I have a friend who says bread is best when made by hand. Gluten won't develop as it's meant to if you don't knead the dough with your hands, stretch and pummel it. When I lived in Toronto, I used to work in a kitchen where the chef made the bartender stand in the refrigerator (obviously a walk-in fridge; their relationship wasn't that weird) to beat cream with a whisk. He didn't believe in whipping cream with a machine. I think I remember that the hand-whipped cream stayed stiff longer.

On another note entirely: does anyone remember Marianne Wiggins? She was Salman Rushdie's second wife. I was looking for a book on my shelves and found her short story collection, Bet They'll Miss Us When We're Gone (1991). Isn't that a good title? I'm on a streak of reading short fiction and think I'll reread this next. I wonder what she's written since. To be a writer, as well as the partner of a writer with outstanding notoriety, must complicate the questions and doubts that often characterize the writing process. I'm not referring to the notoriety of the fatwa but that Rushdie had already won the Booker when they were married.

The weather is changing. Getting cooler. The wood in the house is creaking, resettling.
Posted by Alice at 12:55 PM 1 comment: 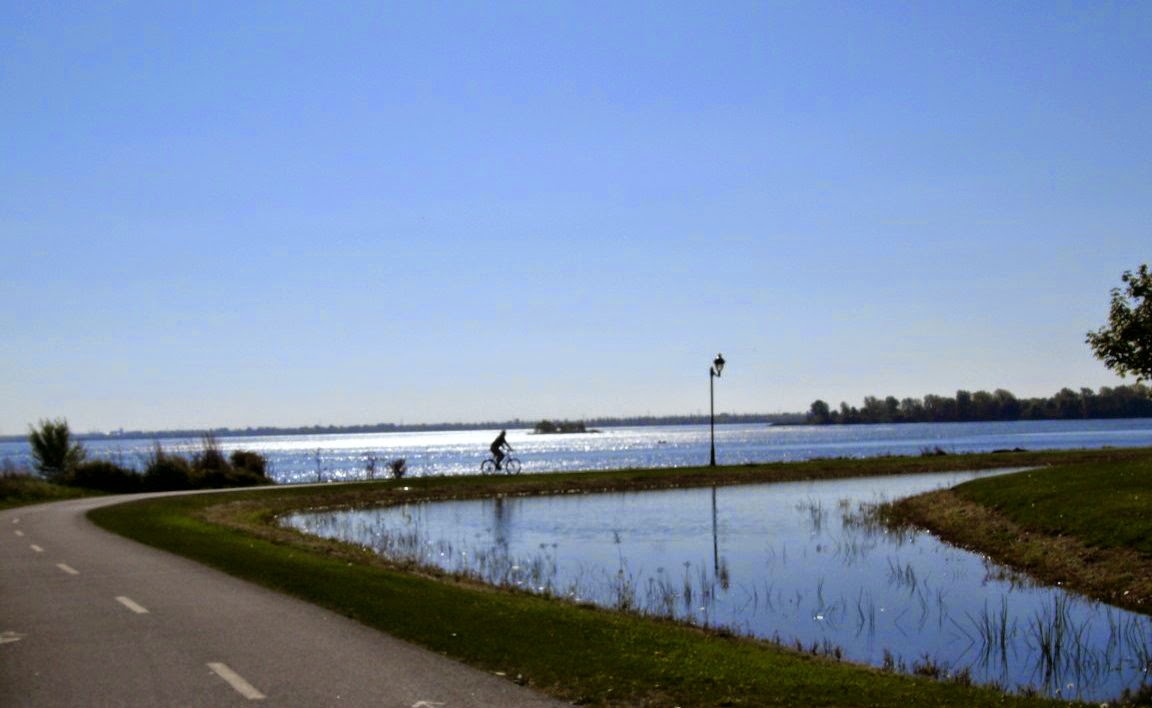 'Oscar winner and comedian Robin Williams died this morning at 63. While his publicist wouldn’t confirm that his death was a suicide, a rep did issue this statement. “Robin Williams passed away this morning. He has been battling severe depression of late. This is a tragic and sudden loss. The family respectfully asks for their privacy as they grieve during this very difficult time.”'

This is one of many quotes I saw yesterday evening. It is terrible news from many angles--and doesn't help that no one wants to use the word suicide.
Suicide is not just a death or a loss. Suicide is a willed departure. The person might not be in a healthy state of mind to make this decision, which allows for no other decisions--but it is nevertheless a decision which was made and acted upon. When the manner of suicide shows meticulous planning it can't be spoken of as an accident. The person was depressed. The person might not be what we call normal anymore. The person wanted to die.
Family members especially don't want to use the word suicide because it's hard not to wonder how it reflects on the family. Supposedly they're the people closest to the person who wanted to be dead--who did not or could not reach out to them for help.
As a family member it's hard not to feel at least partly blamed that your child, sibling, or parent chose to die. Suicide exposes the great despair this person must have felt. Suicide exposes how alone this person was in their despair.
Well, okay, existentially we're all alone. But part of learning how to manage in life is making connections--lifelines let me call them--to others.
As long as people don't talk about suicide openly, it will continue to happen and be swept aside as a shameful taboo. As a secret, suicide will continue to work its magic, beckoning those who only want all their troubles, darkness and misery to stop.
The implications for family (and society) who have had a suicide are stronger than the grief one feels over a death. We grieve for death. With suicide our grief is compounded by guilt and even anger. It's hard to grieve when you're angry at this goddamn stupid thing the person did.
Earlier this summer the brother of a good friend, a man to all accounts successful at his work, much loved by his colleagues and friends, married and with two children, killed himself. Though it was hard, the decision was made to speak of suicide at the funeral service. I respect and commend that the family took this step.
I'm remembering my sister's suicide over thirty years ago. Our family had no service. We're not religious. But we also never got together to honour her memory. Were we ever even all in the same room together after her suicide? Suicide has the potential to blast a family dynamic apart.
What I realized, while listening to the readings at the funeral service for our friend's brother, was that I had allowed the manner of my sister's death eclipse the fact that she'd lived. All my memories of her were coloured by her final decision to go. That was wrong--but it's not only my wrong. It's how we deal with suicide in our society.
Robin William wasn't "lost". He killed himself. I wish it would be said openly. Now is not the time for euphemisms. In his case at least, since he was famous, people will remember his life and accomplishments. But people also need to think why he chose death.
In the years since my sister's suicide, I have talked to many people about suicide. It turns out many have a family member--an aunt, a grandfather, a mother, a cousin, a sibling like myself--who have killed themselves. It's still said with a hush. We have to say it out loud. 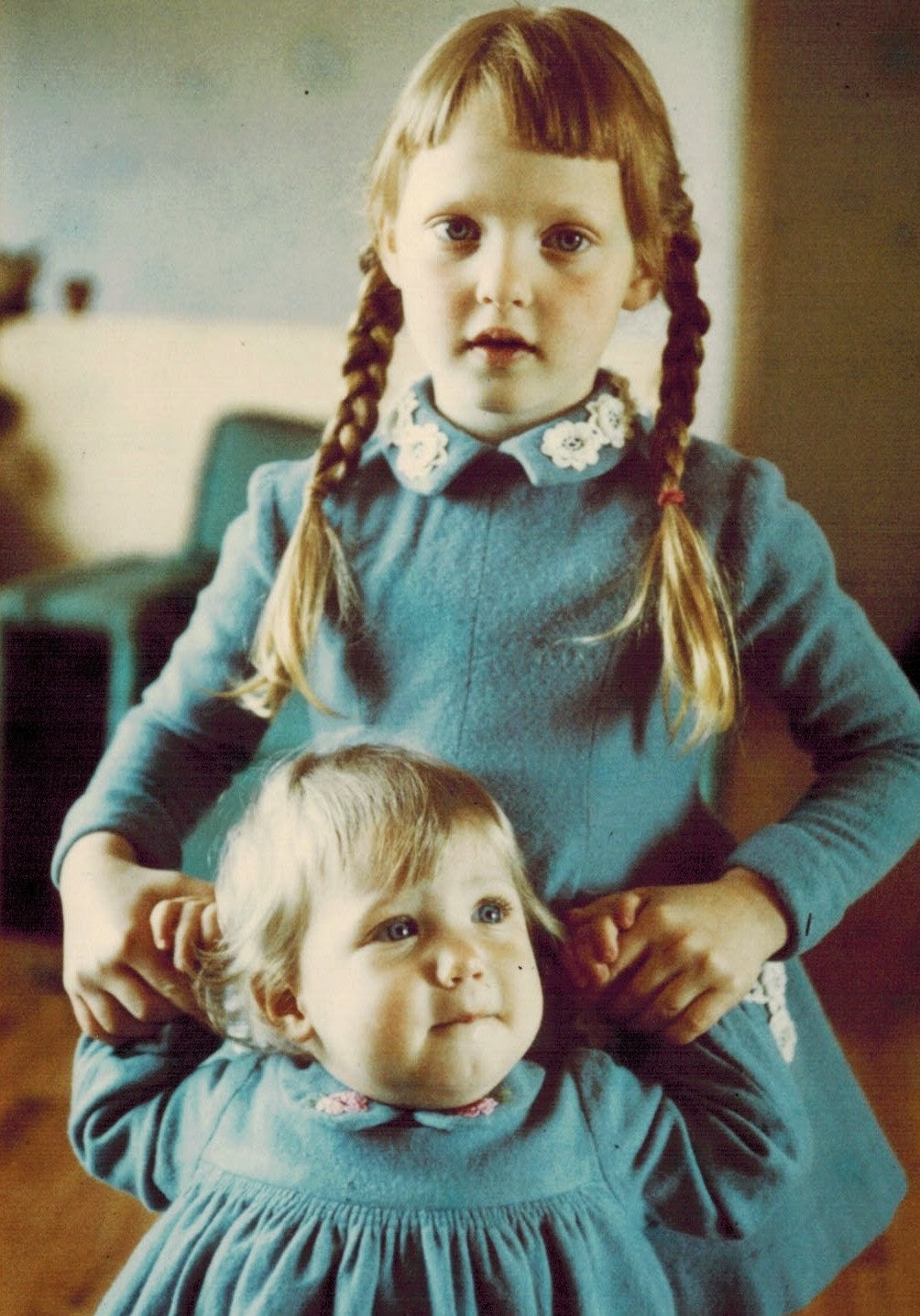