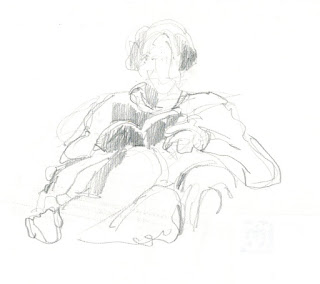 Not just Frida Kahlo but Diego Rivera, too, will be featured in an upcoming show at the Art Gallery of Ontario from Oct 20 to Jan 20, 2013. I'm not sure how those enormous Diego Rivera murals, which are so impressive, are going to be transported from Mexico City to Toronto. I'm guessing there will be more paintings by Frida Kahlo.

I decided to get ready for the show by decking out my hands like Frida did. Have you seen the photos of her painting with a ring on every finger and bracelets up her arm? I have no idea how she managed to lift a paint brush, much less lift it with apparent grace. Silver and stones are heavy. I think I'll restrain myself to just two rings and one bracelet. 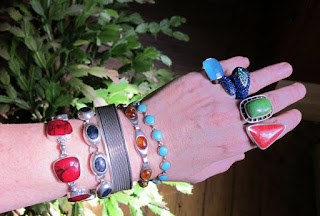 on being a reader for a writing contest

Last year I was a reader for a writing contest. I was reminded of it the other day when I saw a man who was also involved in the contest. Oh yeah, we said. Remember that contest? So many submissions. I was only one of several readers and I read more than 500 stories.

It's wonderful to imagine there are so many would-be writers out there. Too bad that doesn't translate into would-be readers. One can learn so much simply from reading. I am going to shriek the next time I meet a person who tells me she wants to be a writer but she doesn't read because... oh... she just doesn't.

There is no excuse. If you don't love writing enough to read writing, don't bother trying to write. You probably can't. There's the other argument too: if you don't read, why would anyone read you? Because your writing will be brilliant? If you don't read, that's highly unlikely.

Right now I'm thinking about people who read and write and who enter contests. My advice--after having  read 500+ stories--is to write the best story you possibly can. Stick with the writing. Don't get cute. When a reader has to go through so many pages, the reader can get really aggravated by cute.

What is cute? Fooling around with formatting in the hope that will make your story stand out from the crowd. The only thing that will make your story stand out is language and how you use it, whether you can keep a reader's interest with your story and your writing. If your story is weak, using triple quotation marks will not help. Writing out the page number in gothic font will not help. Right justifying--aligning the print to the right instead of the left, as is usual--will not help. In fact, any of these gimmicky attempts to attract me as a reader is likely to make me toss a story aside. Except that when I'm doing a job, I'm obliged to keep reading.

I spent many hours--days!--reading 500+ stories. When I picked up a story decked out with bells and whistles, I read with a sour eye. Except then I read one that was very good. I mean the story, not the bells and whistles. I couldn't bring myself to toss the story onto my keeper pile because I was so irritated by the silly visuals of the presentation. I ground my teeth. No way. But the story was very good, and after I read a few not-very-good stories, I had to snatch the gimmicky one out of the no pile. Perhaps the other reader, who had the same group of stories as I did, went through a similar battle between good sense and annoyance. Almost against my will, that story made it into my final list which I submitted to the people who were running the contest, who did their own triage. I suspect that they, too, had to overcome a certain distaste for the writer's tactics. Ditto for the jury who awarded it first prize. Why do I think that? When the story was published, it didn't appear as I received it on paper.

Now I'm wondering if the writer thinks he came to especial attention because he'd jazzed up the appearance of his story. He did not. In fact, he spent half a day on my towering no pile because of the gimmicks.

It irritates me that he might hand out that kind of advice to other writers. If you really want them to take notice, use weird font. Format your paragraphs like stanzas. Etc.

Fortunately, this isn't a story but a post on a blog, and blog entries are ever so much fun when they have drawings or pictures. Here's one from my Grimms' that best typifies how I feel after having written the above. It's a devil. Illustration by Fritz Fischer. 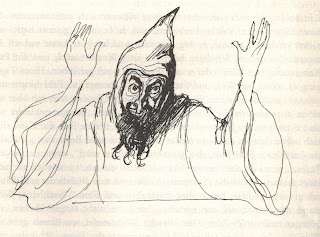