another Grimms fairytale: clever Else / die kluge Else

This Grimms fairytale, "Die kluge Else" or "Clever Else", always tortured me a little as a child, because when my name is pronounced by a German speaker--as were my parents and their friends--it sounds more like Else than the English Alice. (Only in later years did my parents learn how to say Alice the English way.)
As well, as a child, I sort of hoped I was clever. But did that mean this miserable creature might by my fate? 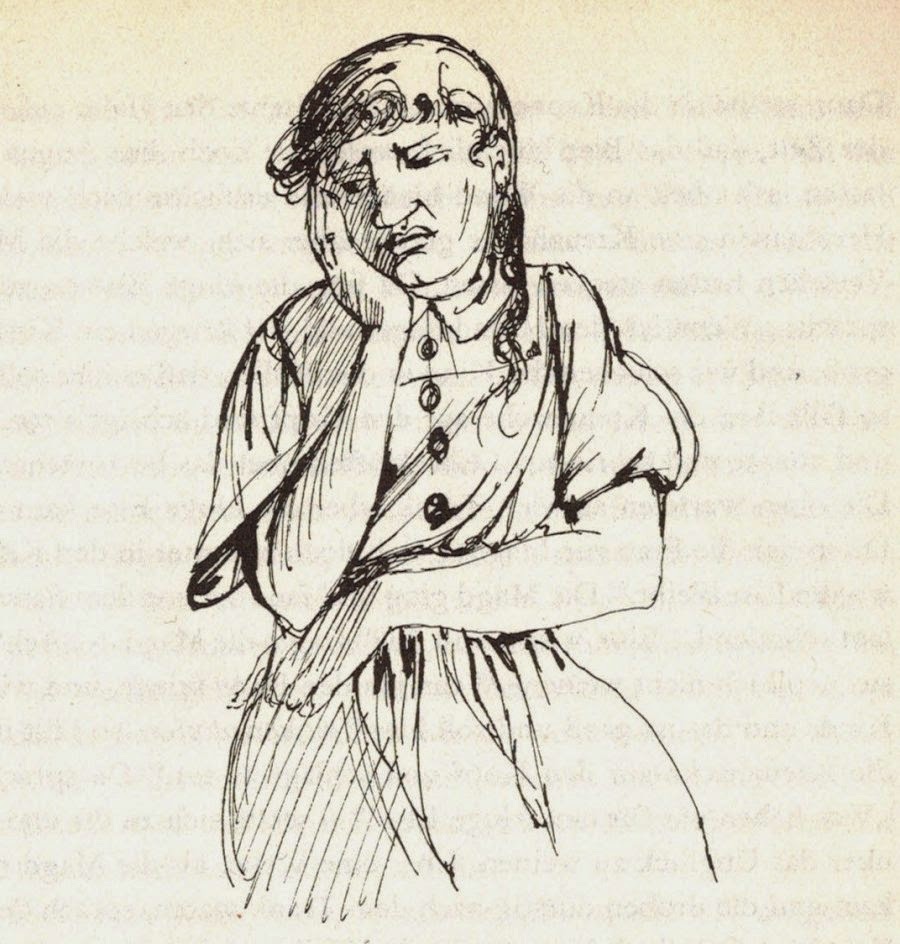 Once there was a man who had a daughter called Else. When she grew up, he said, "We want her to marry."
--right to the point, those German fathers

"Yes," said her mother, "if only a man would come she would consent to have."
--nice that her mother rights the balance, though she does it by making Else sound difficult

Finally a man by the name of Hans came from far away. He decided he was interested, though he made the condition that clever Else also had to be wise.
"Goodness," her father said, "she's so smart, you can hear her thoughts whirring."
--is this a compliment or a nuisance? In German the literal words are: she has thread in her head.

Her mother said, "She sees the wind in the alleys and hears flies cough."
"All very well," said Hans, "but if she's not wise, I won't take her."
--I thought Else was the difficult one, but so far we haven't heard her say a word. Hans is making all the conditions.

Once they were finished eating, Else's mother said, "Else, go to the cellar and fetch beer."
Else took the jug from its hook, went down the stairs, and on the way opened and shut the lid so the time would pass quickly.
--this is the first we've seen of clever Else and I'm not overly impressed with how she amuses herself. True, the clapping sound could be a cover for deep philosophical rumination, but I dunno.

If you're not familiar with beer jugs or mugs with lids, here's an example: 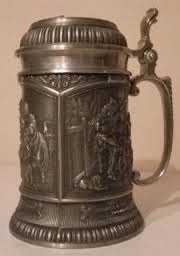 In the cellar Else fetched a little stool and set it before the beer tap so she wouldn't have to stoop and strain her back or otherwise hurt herself.
She held the jug under the spout, and while the beer poured, she didn't want her eyes to be idle so she began to examine the wall, looking from side to side, and finally noticing the pickaxe that hung over the barrel.
Clever Else said, "If I marry Hans and we have a child and it gets older and we send it down to the cellar to get beer, the pickaxe will fall on its head and kill it."
She began to cry with all her heart over this impending misfortune.

The man said to his wife, "Go down into the cellar and see what's keeping Else." His wife found all three lamenting in front of the beer barrel. When she asked why, Else explained that her future child would be killed when it came to fetch beer and the pickaxe fell on its head.
Her mother threw up her arms at this clever deduction, exclaimed at how smart Else was, and sat down to cry with the others.
Upstairs the man waited for a while longer, but his wife didn't return and his thirst was great.
--again: beer. He's got his priorities.

He said, "It looks as if I'll have to go see for myself what's keeping Else downstairs."
But in the cellar, when he saw them all sitting and weeping and the reason for their dismay was explained to him--about Else having a child and the child growing so big that it would be sent to the cellar to fetch beer and the child would stand right here where the pickaxe would fall on its head and kill it--he cried, "Else is so clever!" And sat with the others and lamented with them.

For a long time the groom sat upstairs alone. As no one returned, he thought: They're waiting for you in the cellar.You should see what's going on.
--this last sentence is so bizarre--him thinking about himself in 2nd person--I translated it as is

He climbed down the stairs and saw all five of them, each one weeping louder than the next.
"What great misfortune has happened?" he asked.
"Oh, my poor dear Hans," Else said, "if we marry each other and have a child and it gets older, and we send it to the cellar to fetch beer, well, look! That pickaxe up there is going to chop off its head! Is that not reason enough to weep?"
"Wow," said Hans, "a more brilliant mind than this I don't need for my household. Since you are such a clever Else, I will have you." He took her by the hand, brought her outside and married her.
--the plot takes forever repeating the scenario with the as yet nonexistent child and the pickaxe but once Hans is brought up to speed, things move fast

When they were married for a while, Hans said, "Wife, I will go work and earn some money. You go into the field and cut some corn so that we can have bread."
"Yes, my dear Hans, I will."
Once Hans was gone, she cooked herself some porridge.
--in German she cooks herself Brei which translates as mash. It might be a very healthy mash made with... what? What did they have in the kitchen if he hasn't been working and she needs to cut corn and mill it to make flour before she can even bake bread? Porridge is poor enough. I don't want to say mash. And of course, it's true, Brei might have been a more substantial dish in the 1800s.

She took her porridge into the field and when she got to their allotment, she wondered out loud, "What do I do? Do I cut the corn first, or do I eat first? Gee, I think I'd better eat first." She ate the whole pot until she was full, and then said, "What do I do? Should I take a nap first or should I cut the corn first? Gee, I think I'd better sleep first." She lay down in the corn and fell fast asleep.

Hans had long been home and Else still hadn't returned. He said, "What a clever Else I have. She works so hard that she doesn't even come home to eat." But as she still didn't come home and it began to get dark, Hans went to see how much corn she had cut. Nothing was cut and she lay on the ground, fast asleep.
Hans ran home as quickly as he could and grabbed a net for catching birds that was hung with little bells and draped it around her. She kept sleeping.
Again he ran home, shut the door, sat on a stool and worked.
Finally, when it was already very dark, clever Else woke, and when she stood up, the bells in the net began tinkling. The sound frightened and disoriented her until she wasn't sure if she was truly clever Else. "Am I or am I not?" But she didn't know what the answer was and stood for a while in confusion.
Finally she thought, I will go home and ask if I am who I am or if I'm not. At home they'll be able to tell me.
She ran to the house door but it was closed. She knocked on the window and called, "Hans, is Else in there?"
"Yes," said Hans. "She's in here."
This alarmed Else who said, "Oh god, then I'm not me!"
She ran to another door but when people heard the bells, they wouldn't open, and she couldn't get any help. She kept running until she'd run from the village and no one ever saw her again. 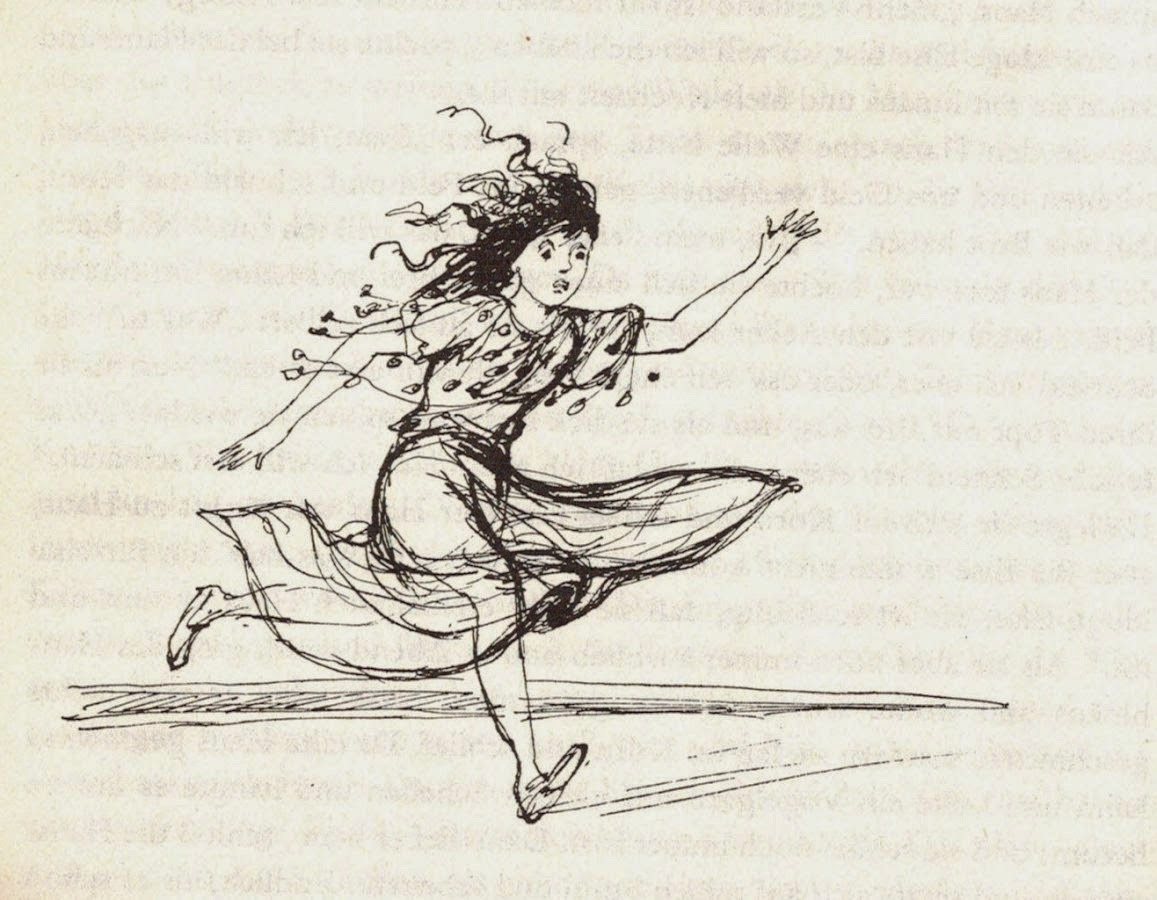 What to say to this? I suppose Else can be seen as the folkloric version of a questioning Hamlet--and as such, she's the butt of the story, more ridiculous than practical.
Hans is the one who bothers me. He decides to marry her and then... does he trick her? Is he mean? Is he vengeful?

When I read this story as a child, I could never understand why no one suggested taking the pickaxe off the wall.
Posted by Alice at 11:13 PM No comments: