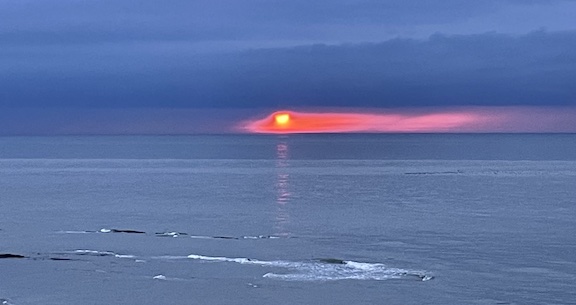 I'll warn you right now. When the sun starts to go down over water, I grab my camera and dash outside, even if only onto the porch with the road between me and the sea. (R groans.) Whether the sky is clear, whether there are clouds--even when it's completely overcast and you don't think there's a slice where colour will get through--there is almost always a sunset of note. 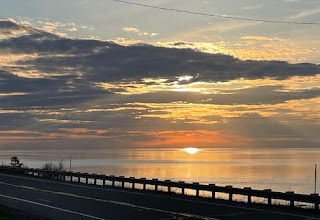 I was stunned the first time we came to the Gaspé in the winter and I was waiting for the magic over ice, and the sun set HOURS EARLIER BEHIND THE HILLS. It's by coming to the coast where land and sea meet that I've learned more about the way the Earth tilts than any lesson taught in school. I'm a hands-on learner.

There was extraordinary snowfall in the hills this past winter and when the spring sun melts the snow, water tumbles down down down to the sea. It gushes streams, it carves the sand, it turns our yard into a sodden mat. I sit outside and hear gurgling and chuckling. We lost power for about 12 hours because the snow melt caused a rock slide. We went for a walk and found the path washed out. 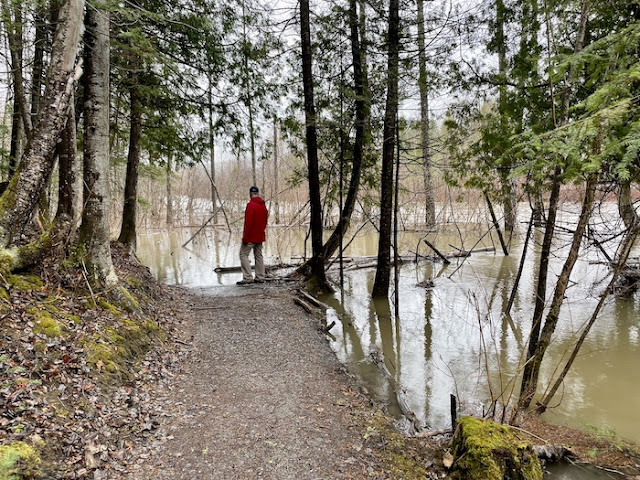 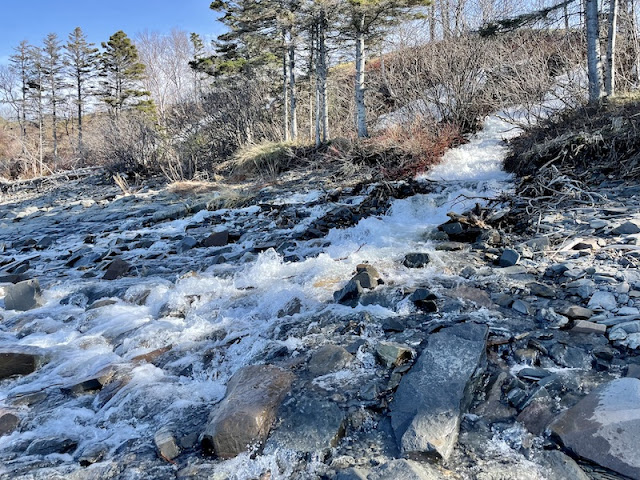 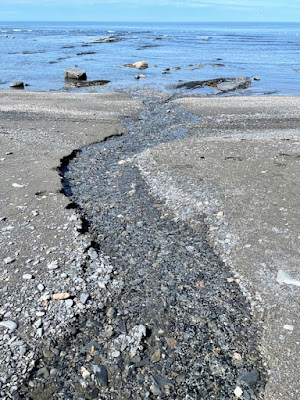 There were so many streams--getting broader and deeper every day--that I didn't do my usual rock-clambering walk along the shore because I couldn't get across them. I walked by the road, and so saw a car parked at the cemetery where there are usually only gravestones. A man was slicing squares of grass with edge of his shovel, putting the chopped pieces aside in a neat mound, making a coffin-shaped rectangle. I assumed he was a cemetery employee, but no, he told me, there is no staff. Family dig each others' graves. He was digging his aunt's grave. He'd already buried six aunts and had two more to go. Next, he said, it's my turn. He laughed. He was very cheerful.

I do not want my body buried, but I find it fitting that a loved one, whoever that may be, should dig the grave if there is going to be a grave. I asked what happened if there is no family. He said a volunteer would do it. He dug quickly--the experience of six aunts already? he didn't mention his parents--and on my return an hour later, although his car was still there, I didn't see him. Until I noticed the shovelfuls of soil flying out of the hole. He was digging a proper grave. 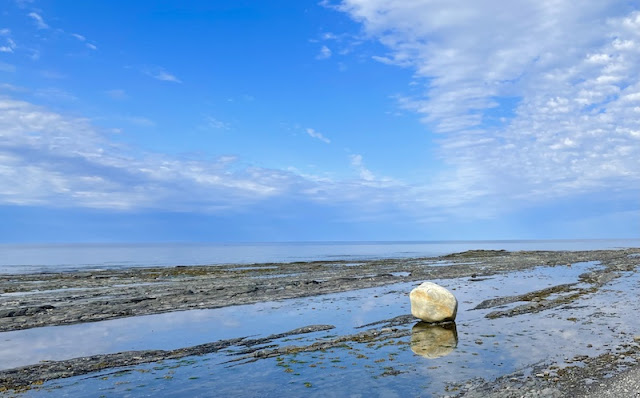 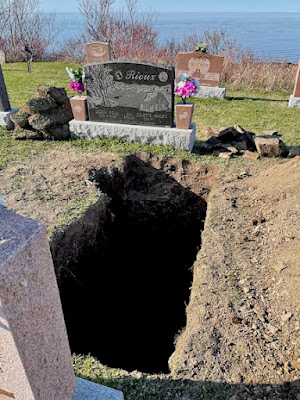 I've noticed before--in other cities, in other countries--that the dead always get prime real estate. In Montreal, the large Catholic, Protestant, and Jewish cemeteries are on the mountain. In this small village, the dead have a view on the wide horizon of sea.

I also had a conversation of sorts with a man whose French I only half understood because he didn't quite form his consonants. They were like shadows around his vowels. In English the way he spoke would have sounded like... 'I on no ut yoooouuu 'ink' for 'I don't know what you think'. We were talking about the environment, by which I thought he meant climate change. He said you had to pay attention to the environment because if not, the environment would come back to haunt you, and what you had to do then was going to be worse than doing the right thing now. It took a while before I realized he meant the Ministry of the Environment and government rules and fines. 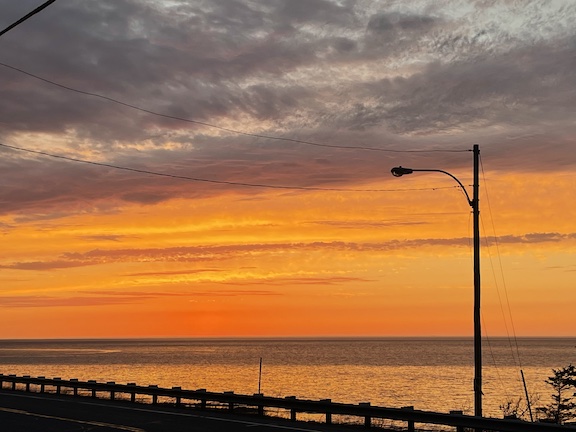 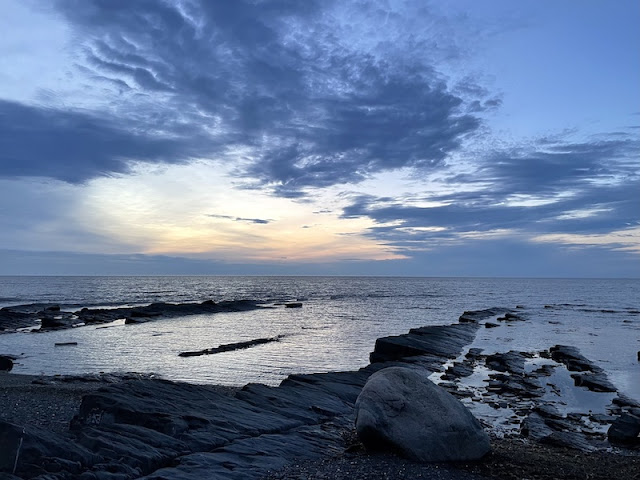 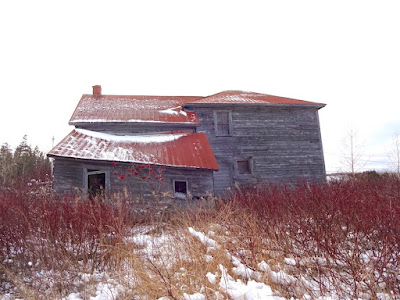 Where was R? He'd driven farther northeast, almost to the tip of the peninsula, to work on another old house for a few days. A back addition which we knew was collapsing had collapsed even more and the municipality had asked for it to be fixed or demolished. I haven't visited the house for a couple of years but this is what it looked like then.

R knocked down the walls and took apart the tin roof. It wasn't easy. The construction was solid. The joints were dovetailed, the nails six inches long.  Each nail in the tin roof had been individually caulked. 28 rows of 10 nails = 280 nails. He counted in the way one counts when a task seems like it might last forever unless you define it. 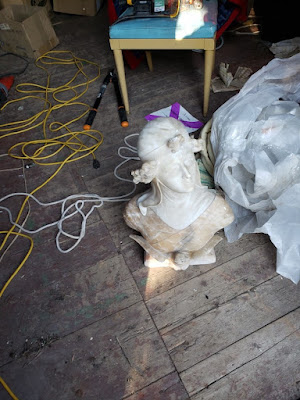 The house still contained a lot of the previous owner's abandoned furniture. R carried a lot out to the side of the road for Big Garbage Day. Jour de la collecte des objets volumineux. A washing machine, a double porcelain sink, 1960s style lamps and armchairs. I should say that on Big Garbage Day, it's understood that people driving by will stop and see if there's anything they might like to take--and they do. The sink was soon gone. One fellow began talking to R and asked if he could look through whatever was still in the house. He liked a medicine cabinet. R told him it was his.
R kept a box of handsome brass drawer handles, spools of 100% wool for weaving, an Omega sewing machine which I'm having cleaned and repaired, an alabaster bust he found wrapped in canvas and tied in twine and wondered if there might be a dead person inside.

For now the house is boarded up tight again.

When we arrived in the Gaspé, there was still a bank of snow beside the deck. For the two weeks that we were there, the snow shrunk and melted, and the buds of the trees began to unfurl. Driving 800 k to Montreal was a time-lapse trip into early spring, mid to late spring, and bingo! Summer full on in Montreal. 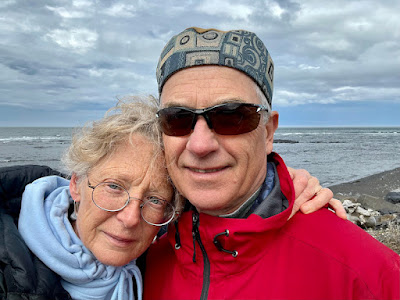