the old grandfather and his grandson, a lesser known grimm's fairytale

I've been so busy working on a new novel that I've let this blog slide. I'm battling with words and with pages, which doesn't require weapons so much as it does time, and of time there's never enough. Only  so many minutes in an hour, hours in a day, days per week--though in my case that promises to change soon. Very soon. There's a riddle for you: how I'm going to stretch my hours.

When I began this blog I'd said that I would occasionally translate a Grimm's story from the book my grandfather sent when I was a child. Here I've chosen a short one... to ease myself away from the holiday mood and back to my desk.

"The Old Grandfather and his Grandson"
There was once a very old man. His eyes had grown bleary, his ears deaf, his knees trembled. When he sat at the table, he could hardly hold his spoon and spilled soup on the tablecloth, and sometimes it dribbled from his mouth too. His son and his son's wife were disgusted, and decided that the old grandfather should sit in the corner behind the stove. They gave him his food in an earthenware bowl, and even then didn't fill it. Saddened, he gazed at the table and his eyes grew wet. One time his hands shook so much that he couldn't hold his bowl and it fell to the ground and broke. The young wife scolded him, but he said nothing, only sighed. She bought a wooden dish for a few cents, and that was his now. And so they sat: the old man in the corner behind the stove, the husband and wife at the table. The four-year-old grandson was on the floor trying to fit small pieces of wood together. "What are you doing?" asked his father. "I'm making a little trough," answered the child,"that Mother and Father will have to eat from it when I'm big." Husband and wife looked at each other for a while, finally began to cry, and fetched the old grandfather to the table and let him eat with them from then on, and said nothing, even when he spilled food. 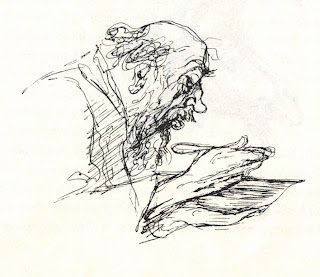 This story affected me as a child. Maybe because the simple settling of justice appealed to my child's sense of right and wrong. Maybe because the four-year-old child is the hero.
Today I found the story by flipping through the pages and looking for the illustration which I still remember.
The German is confusing with its grandfather, son, husband, wife, mother, father, grandson. The perspective changes every sentence.
I'm not sure how to translate the Tröglein, which the child wants to build for his parents. Was it a kind of dish or basin that doesn't exist in modern kitchens? Trog means trough--see the similarity in spelling--but a trough sounds more appropriate for a barn. In German the suffix lein gets added to any number of nouns to shrink the size. A Tisch is a table and a little table is a Tischlein.
It doesn't work with every noun, but if you see a German word with lein on the end, think small. That's my free blog advice for the end of 2012.

A tea towel dumpling is a savoury bread dumpling, about the size of football, sliced and served with stewed meat or lentils. It's an Austrian dish that probably has a cousin in Bavaria or other Eastern European countries.
I got the recipe from my Tirolean aunt who made it without a recipe. I annoyed her no end by trying to measure the ingredients as she used them, but it was the only way I could be sure that I would come home again and know how to make it. It's a tasty, cold weather meal, ideal for anyone who likes bready textures as I do. 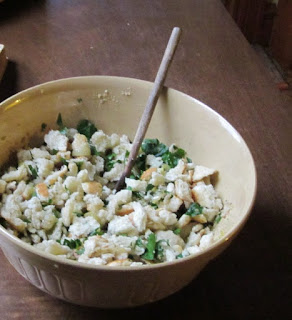 First--and most difficult depending on where you live--you'll need 400 g of chewy bread. The best are German buns called Semmel, but I've never found what I'd call a Semmel in Montreal. Here I use a Belgian miche, a round loaf that looks like this: 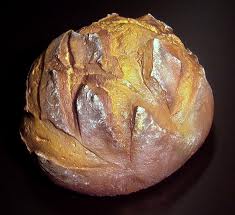 The recipe calls for old bread torn into small pieces. I tear up fresh bread and let it dry it out for a couple of days. I speed up the process by putting it in the oven at very low heat. You don't want to toast it.
Next you brown chopped onion (one or two depending on your druthers) in oil and add it to the dried bread. Chopped parsley. Salt, pepper and nutmeg.
Half an hour before you want to cook the dumpling, add the wet ingredients which you've mixed:
7 eggs (yes, seven)
1/2 cup oil
1/2 cup milk
What I sometimes do is brown the onion in the 1/2 cup oil. That's either a smart or a lazy step.
You let the mixture sit for half an hour so the dry bread absorbs the liquid. Well, of course.
Now comes the tea towel stage. I make this recipe often enough that I have a dedicated dumpling tea towel. Once you've used a tea towel to make a dumpling, you won't want to use it for anything else again. It gets stained during cooking. It never quite loses the smell of onion. I suppose you could bleach it but I'm allergic to bleach and against it on principle, so I've never tried. In fact, even when I wash the tea towel with detergent after I've used it, I then boil it in fresh water to get rid of any detergent residue. There's great potential for neurosis during the choosing and preparation of an appropriate tea towel. 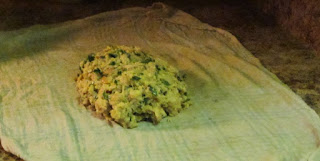 You fold the bottom of the towel over the dough, then fold the top over the bottom. Tie the long ends not too tightly because--with all those eggs--the dumpling will puff out considerably, and a tight knot will only be harder to unknot. 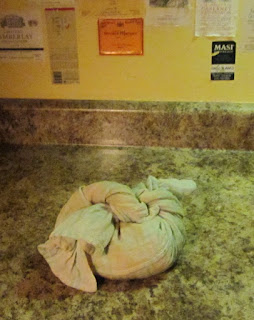 Get a kettle of water boiling and drop in the dumpling. It needs to cook at a simmer for an hour. Less and it won't be done through. More is fine.
Before serving, allow yourself a good few minutes to undo the hot knot. I usually drop the dumpling in the sink and use a knife and fork to fiddle open the tea towel. From the sink onto a serving platter where the dumpling gets sliced.

As I wrote above, this goes well with stew of any variety. Lentils too. It's bready and fluffy and tasty.
I should have taken a photo of a tempting slice of dumpling with stew and vegetables on the plate, but we were too hungry and I forgot.
Posted by Alice at 9:55 PM No comments: