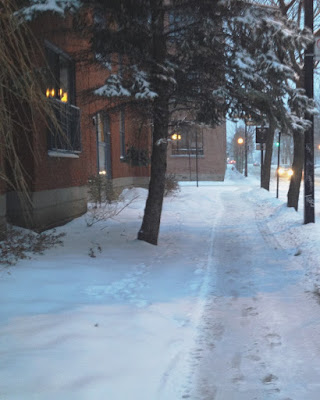 Snow falling, almost dusk, and we've got one more errand. It's got nothing to do with the holidays or tourtière or chestnuts or last-minute gifts or coloured lights. All of that is done. The beans (for the tourtière) are baking.

We're looking for a squeegee to clean the shower stall because the $$ store squeegee we had broke. So where do we go? To the $$ store. It's easy. There, people are cruising the aisles with carts. The last Saturday before Christmas. I cast no aspersions. We're there too.

There is no squeegee--called un squeegee, even though the proper French word is raclette--so we head to another store much similar. They, too, have no squeegee but direct us across the street to the hardware store.

It's an old-style store where you tell the owner what you want and he or his daughter go behind the counters to look through their stock. He not only has squeegees, he asks if we want to use it for outdoor windows or the bathroom. He spends a while looking. His daughter goes to help. They know they have the bathroom ones. They even describe them to us. They have white plastic handles. They're either over here, or over there, or behind this, or maybe in that box.

We look around in case we can see them, though stock is piled to the ceiling and I suspect you need to belong to the owner's gene pool to understand where to begin. There are door handles, plumbing elbows, brooms, boxes of shoelaces, anti-freeze, chocolate bars, rolls of carpet. A cream pitcher stuffed with plastic combs flanked by a few Elvis LPs. A bubble gum and a jelly bean dispenser. 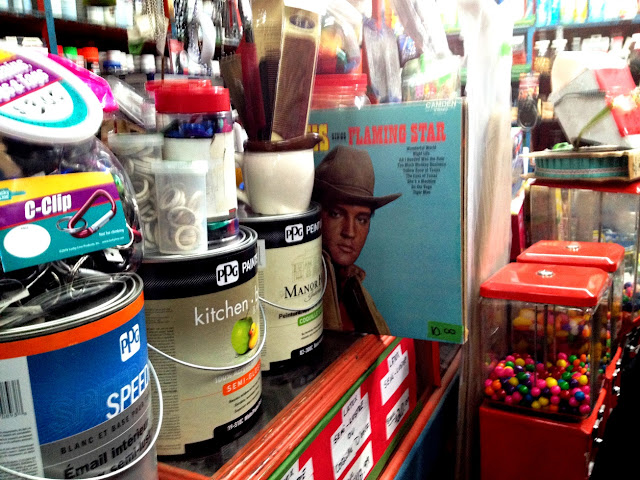 By now, several of the outdoor squeegees have been found and R picks one. It costs $3.

We don't need a bag but the owner tells us he's ready for the municipal law supposed to come into effect in January when stores in Montreal are no allowed to give out plastic bags. He's got paper. He's all set. He can even remember when he used to tie purchases up with string and he can do that too.

We walk home through the snow sifting, drifting, falling. 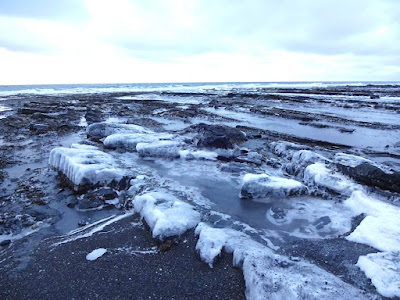 I'd described to a friend how I was standing at the window and watching the waves on the shore rolling in slow-mo. Sorta thick. Then I went down for a walk and saw how the rocks left exposed at low tide had a coating of ice. 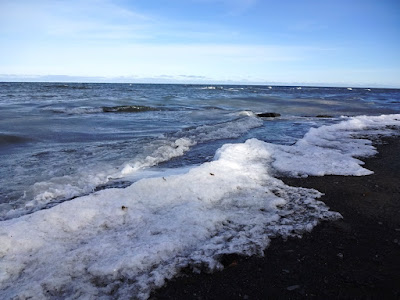 Which made me wonder if the inventors of the Slush Puppie drink happened to be hanging out by the coast in the winter. 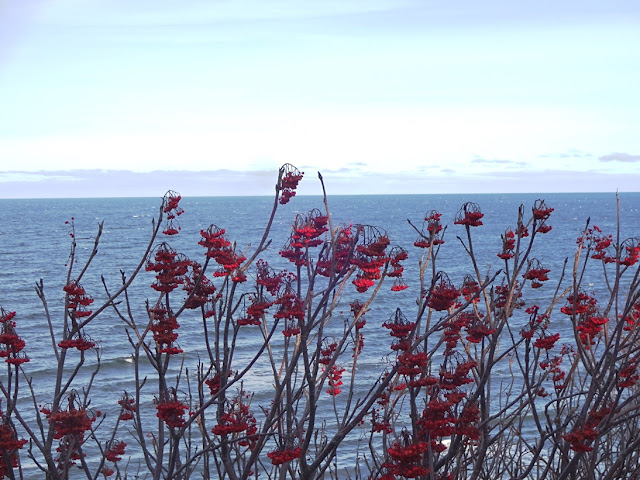 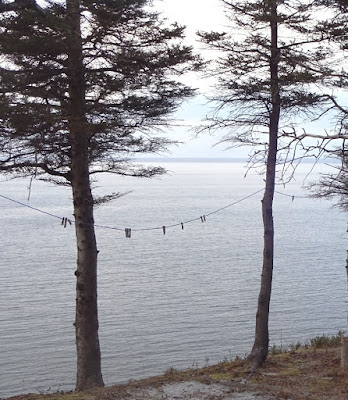 We walked in the hills and found a summer cottage where someone likes to have the salt breeze on the very edge of the cliff dry their clothes. 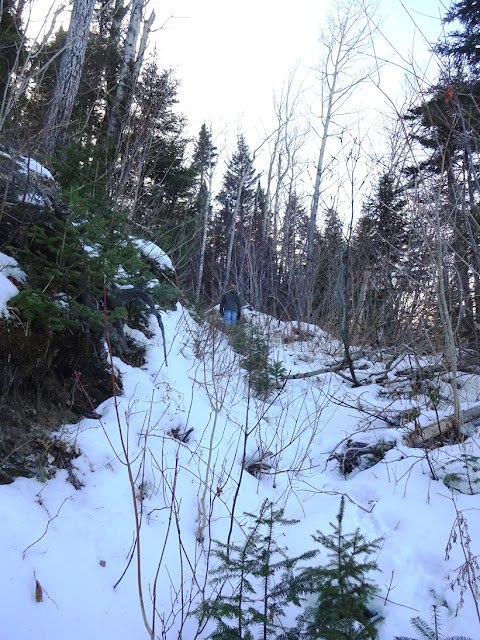 We walked up the side of a mountain. About 300 m/1000 ft high? The range behind our house are called the Chic Chocs. They're the end of the Appalachians.

The neighbour wasn't able to do any work on trail last year. It only takes one summer for fir trees to start to grow and storms to knock down trees. By next year, it won't be possible to climb up there anymore.


I was behind R who was following moose prints. Moose prints in snow are surprisingly delicate and mincing, given the size of a moose. R's are bigger. 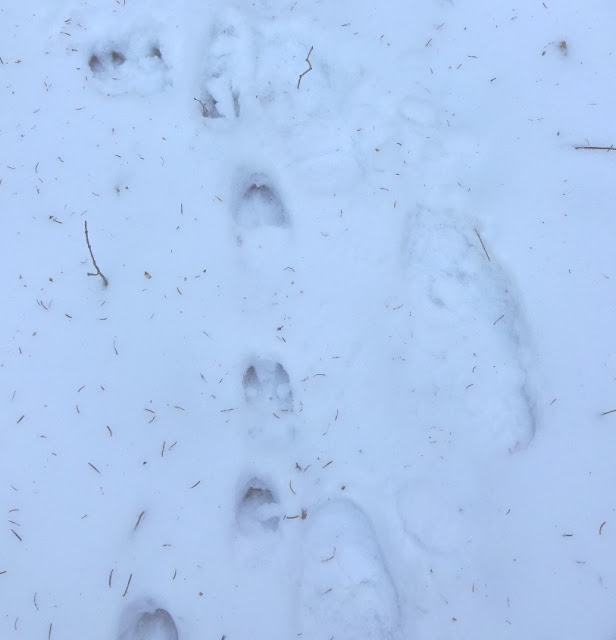 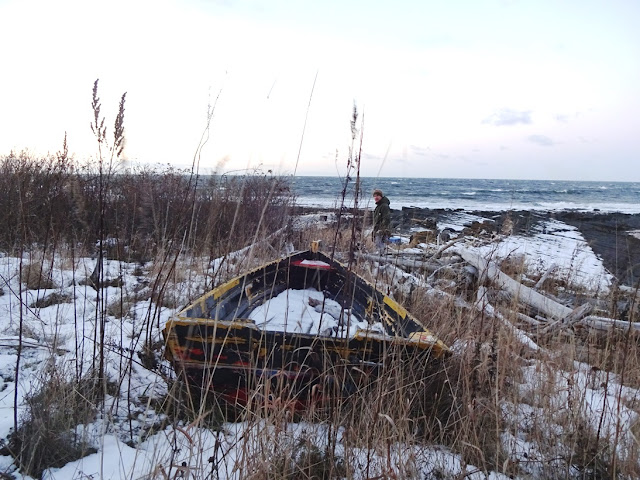 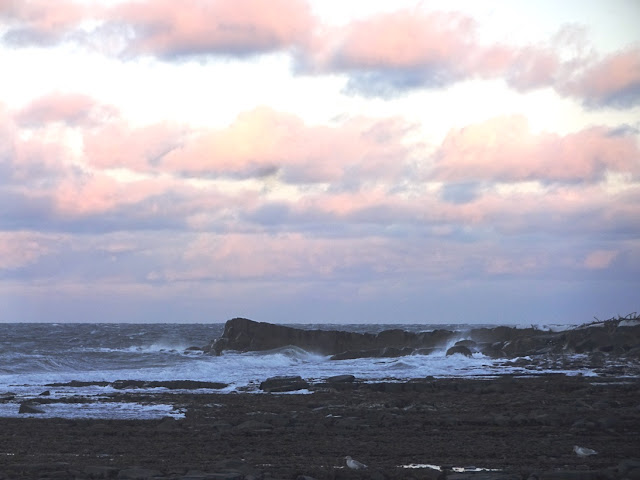 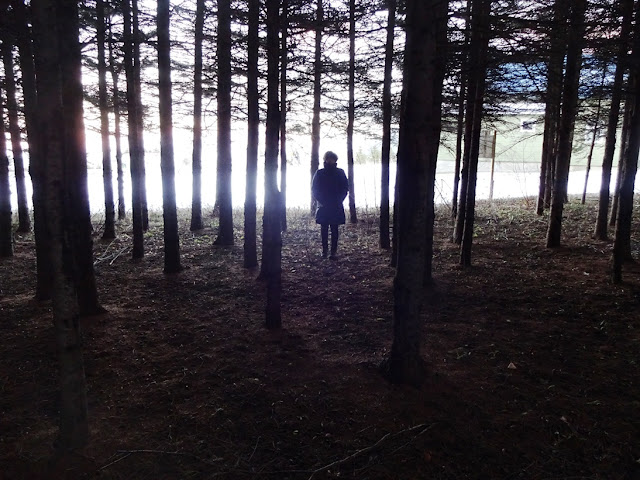