last of the chillies / inner-city gardening 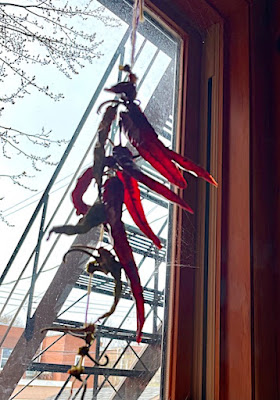 Actually, no. These aren't the last. I still have chilli peppers in glass jars in the freezer, but they don't begin to compare to the fieriness of the ones I hung to dry in the window.

They seem not to have minded their view onto the neighbours' fire escape. Well, hey, this is the city.

I grew them in my plot in the community garden next to the train tracks. The grumble/shriek/heave to a stop of the freight trains en route from the Prairies. The VIA train shuttling along the Quebec-Windsor corridor. I also grew chillies with the green beans climbing the fence in the back alley.

A deeply fond chilli memory is the sriracha a friend made. Delicious green chilli paste too. Hot hot hot!

After years of trying different simple ways to preserve chillies so they retain maximum heat, I've decided that threading them onto string and hanging them to dry is the best. Next year I will be hanging them in every window. 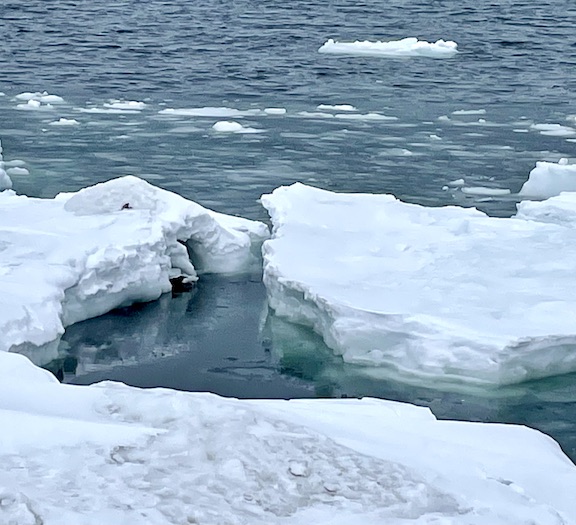 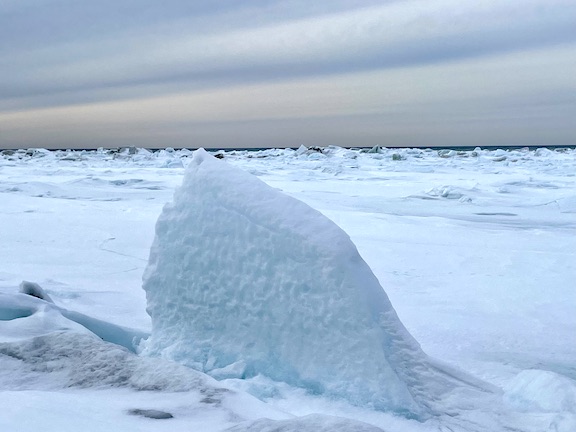 We spent a couple of weeks in the land where wind and snow rule. Except for when the ice starts to break up along the shore and the tide starts to swell again. 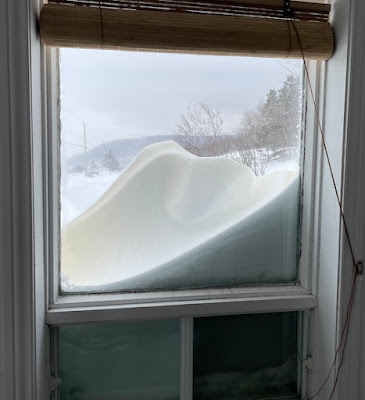 The kitchen window was covered to the top with snow when we arrived and R dug it out, only to have to dig it out again two days later.

We had wind gusting up to 75k/hr, we had one whole day of no wind to disturb the snow falling on the trees, we had magnificent sunsets. 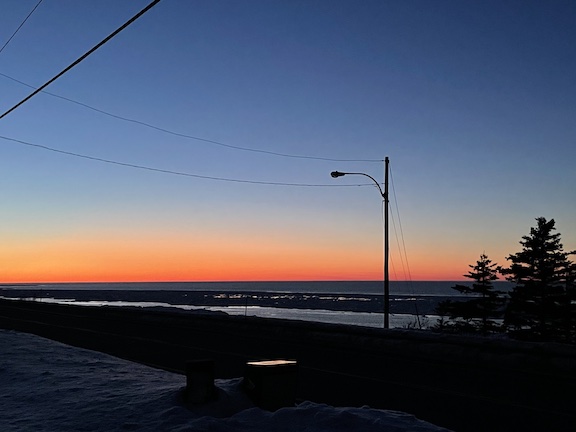 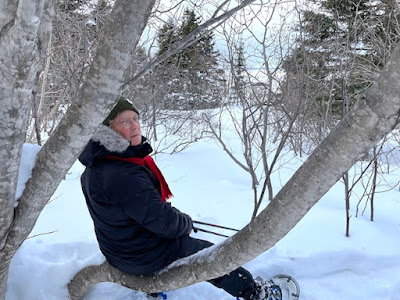 In the woods we snowshoed across moose tracks so deep that we couldn't see the bottom of their steps. How long their legs must be!

I tripped on my snowshoe, fell forward with my pole jabbed up to my wrist in snow, and as I pushed to get up, the pole dug deeper. 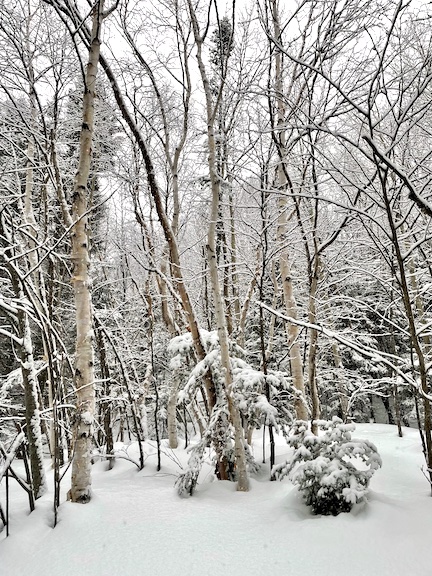 There were chickadees and crows and one robin feeding on a bush of winter-shrivelled berries. There were songbirds trilling about spring that was supposed to be coming if you looked at the light in the sky. There were a lot of last year's nests covered in snow. This one was so small that even heaped with snow it would have fit in my palm.

We snowshoed a lot.

Every day. In the woods when it was windy, along the shore when it wasn't too windy. 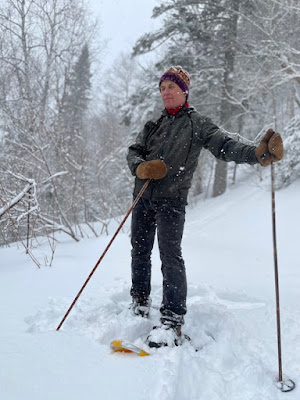 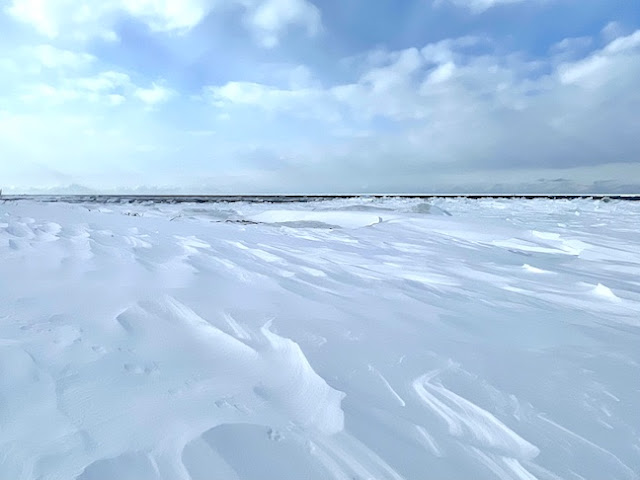 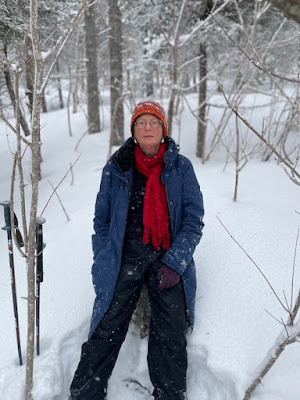 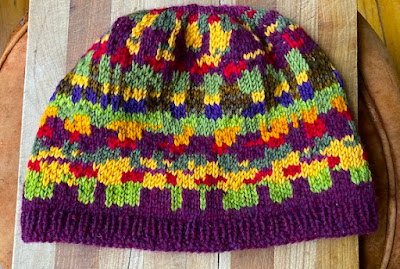 He holds a coffee cup out to drivers stopped at the light. Some roll down their windows and give him money or hand him a half-smoked cigarette, a pastry, a bagel, the pinched end of a joint. I see him most days because he works the crossroad at the head of our street. He's slender with a gentle way of moving between cars. He could be a dancer in baggy clothes. How old is he? Maybe 30? He's from St. Vincent. He has thick dreadlocks.

I know his name, but I won't say it here. When we walk by, R calls out Yaar! which is something he does and there's no discussing it. Once the fellow said to me, I don't know that French word. I told him it wasn't French, just something R liked to say. Pirate talk. So he started saying it back. 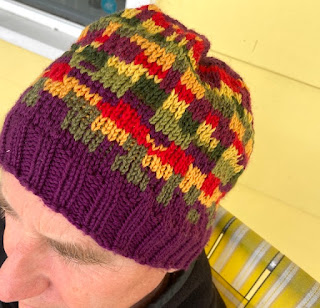 Last fall I wanted to knit R a hat using up different colours of scrap yarn. I didn't have a pattern and it turned out ENORMOUS. Not a hat to fit the head of anyone I knew. I made another one that fit R, but never threw away the ENORMOUS hat away because because because.

A few days ago R told me the fellow said he really liked the hat. R told him I'd made it. Then I saw him when I was out walking and he said, Oh, how I wish I could have a hat like that, I would be so happy.

Today when I went out for a walk I grabbed the ENORMOUS hat, because I thought that with his head of hair, it would fit. It's not always you get the chance to make someone really happy.

He gave a dance step when he saw me coming down the street, waving the hat. I explained how it was I had an extra hat that was ENORMOUS. Except he couldn't pull it over his head, hard as he tried--and I forgot all about distancing in my efforts to help him tug the hat down. A couple of motorists wondered what was going on and didn't move along when the light changed. I didn't know what to say. He still wanted to keep the hat.

Later, when R was returning from his walk, the fellow yelled, Yaar! She come by but the hat don't fit! R told him his hair was probably warmer.