I get annoyed when R comes home from the barber who's trimmed his eyebrows. I like wild and shaggy eyebrows on men.

When I was growing up, I remember that my mother had a steel comb for grooming her eyebrows. She was brunette. Maybe because my eyebrows were white-blond, she didn't bother to pass along eyebrow advice. Not till I was in my 20s did I realize that some woman plucked their eyebrows. (Ouch.) I decided I would never have to do anything like that because mine were hardly visible. Even if I shaped them, who would notice?

It never occurred to me that I might make my eyebrows more visible with eyebrow pencil, but a few years ago, a friend's mother told me I should. I was curious enough to buy an eyebrow pencil. I chose light brown because that was as far as I wanted to venture into Frida Kahlo territory. Except then, in front of the mirror, I balked. Was I supposed to draw an eyebrow over my unruly eyebrow hair? That would look crazy. I would have to shape ie get rid of some white-blond hair first. So no, that wasn't a good idea. Also, when I did draw eyebrows, I looked ridiculous. Frankensteinish.

I used to get comments from women, where I worked, who were more makeup savvy. They experienced much pain to shape and groom their eyebrows and felt that I should too. There were stories about tweezers. Wax that ripped out the hair (plus a layer of skin). There was threading. I'm still not clear how threading works, but it's apparently less painful. I'm not sure if threading is related to one woman's eyebrows that they were entwined with metal thread. I believe that was decorative. It didn't look comfortable, but she was glossy-magazine-cover beautiful.

So I've never done anything with my eyebrows. More recently, however, as the hair on my head is turning white, my white-blond eyebrows are also turning white, and age-white is more wiry than blond-white. I'm going wild and shaggy! Not yet sure what to do about that, but I suspect I'll do nothing. 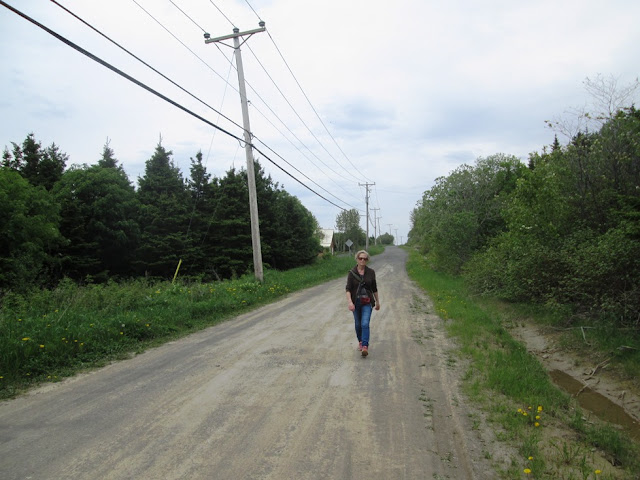 A dusty gravel road marked by hydro poles with antique porcelain insulators. (Antique as in the age of electricity, not Greek mythology.)

We came to the Gaspé for a few days. North of New Brunswick, north of Maine, west of Newfoundland. It's a 9-hour drive from where we live in Montreal. About halfway along the drive, the St. Lawrence River is so wide that you can't see the other side of the coast.

Our house isn't in the town of Gaspé, but a smaller village nearby. In the 2011 census 130 people lived there. 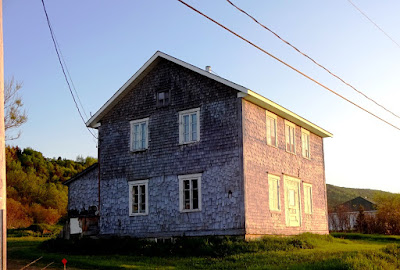 There have been a few deaths since, one our neighbour who lived for 78 years in the cedar shingle house where she was born. As shingles needed to be replaced, she made new ones. Those are the larger shingles on the bottom half of the side wall. There's no doorstep at the front door, because who would be so uncouth as to go in by the front? During the time that we knew her, she lived in the kitchen where she had a wood stove, a table and chairs, a cot to sleep. She liked R and gave him a pair of thick wool socks she'd knit.

When another of our neighbours called this past winter, it wasn't to tell us how the winter storms had washed away part of the highway and damaged the coastline, but that she had passed away.

Our visit to the coast was short, and given the vagaries of Maritime weather. we were lucky to see a magnificent sunset every evening. We walked down the low cliff to the shore and found a washed up log for a front-row seat. Or sat against a granite boulder that was still warm from a day of sun. It was low tide--with the advantage being that it was high tide in the night, so we heard waves smashing in our dreams. 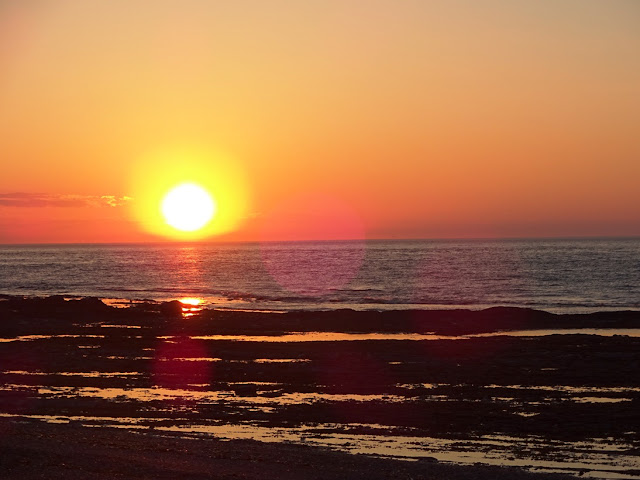 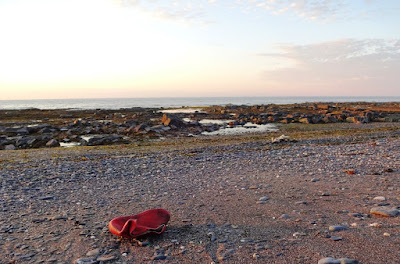 The waves wash in litter--always so much plastic--but some of what we found was clearly lost, not tossed aside. 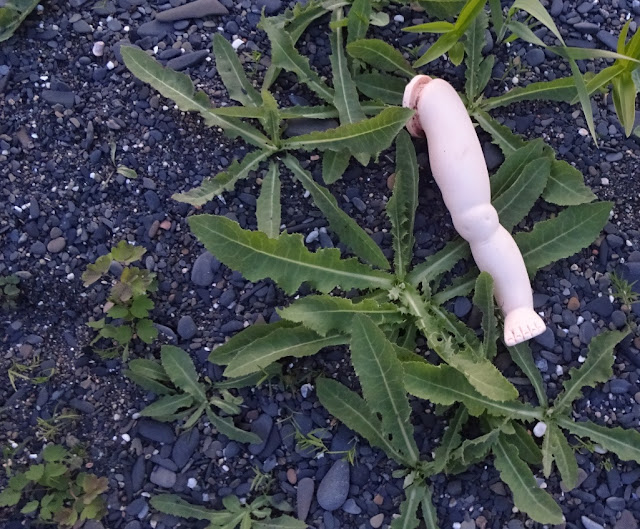 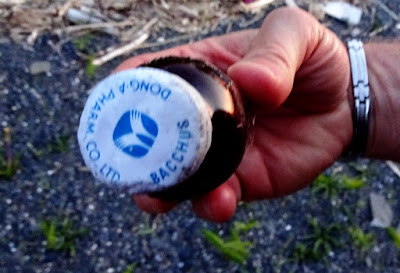 When I came home, I googled Dong-A-Pharm and discovered that Bacchus is an energy drink. They also market one called Garglin. Don't want to know what that one tastes like. The company is in Seoul. I doubt a brown glass bottle would make its way intact from South Korea to the Gulf of St. Lawrence. More likely it got tossed off a ship. That, by the way, is not my large hand but R's. 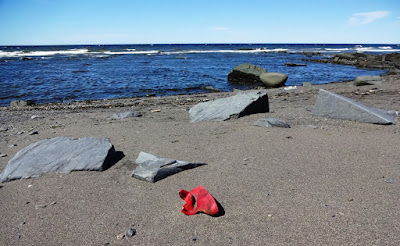 The child's red boot above? We saw it on our first evening. On the last day we found it or its fellow farther along the shore.

We walked by the water, we walked in the hills. 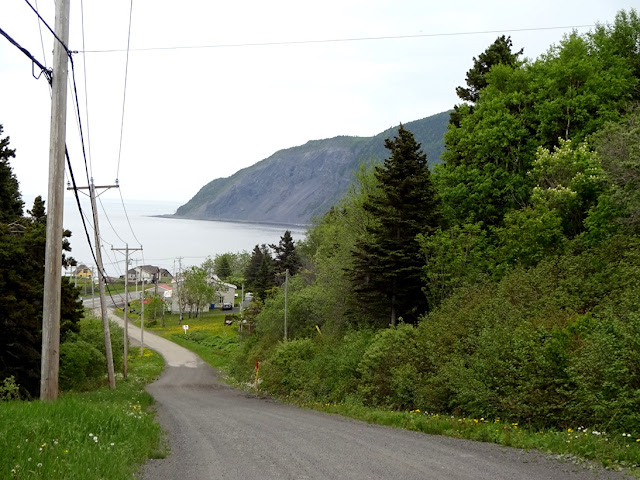 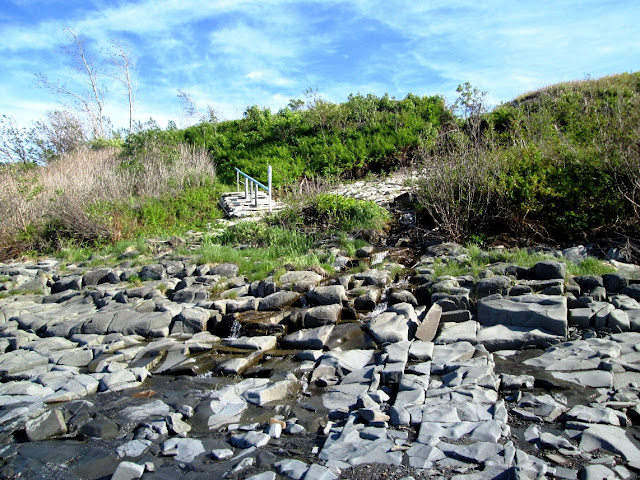 In the woods we came across footprints in the mud. The only animal I can imagine this large in these forests would be a moose, though this looks like a moose with added accessories: more toes, even a hoof on the side? We found moose droppings, also on the path, close to here. 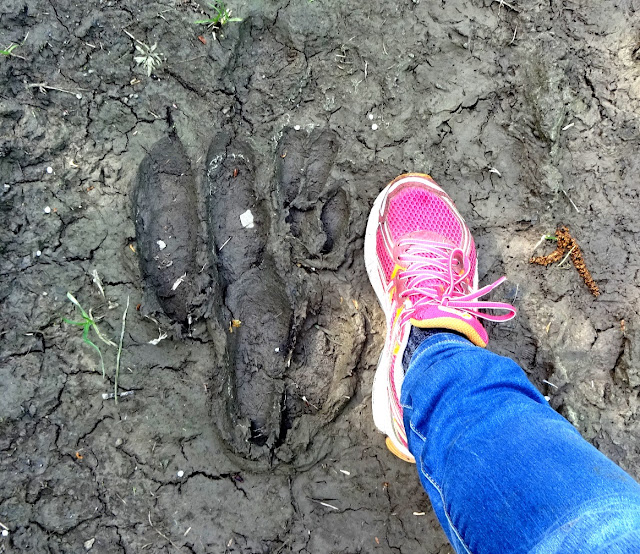 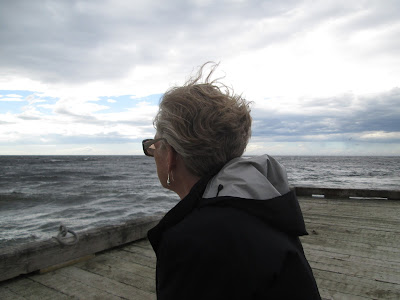 Here's me watching terns dive-bomb into the water for fish. They hovered high up, then plummeted with their beaks like arrows into the water. They seemed already to have swallowed the fish when they surfaced again. 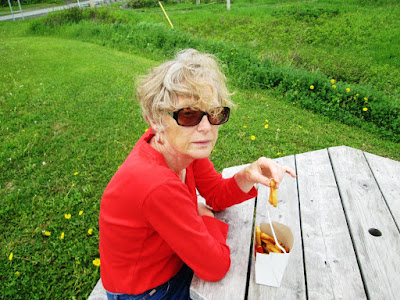 You might not guess but this is my happy face as I'm eating frîtes in Marsoui. That's one reason why I don't use emoticons. There aren't any that translate my particular range of expression. 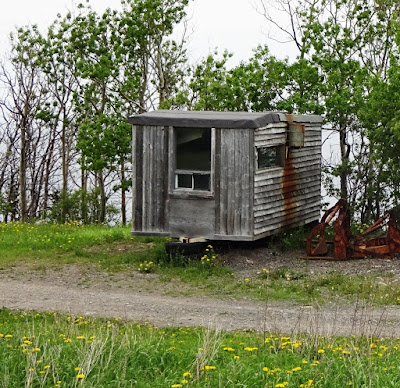 A homemade clapboard trailer. There's a hitch on it so I assume it could, at one time, have been attached to a car. Why pay good money when you can make it yourself?

And when you don't have a hoist to work on your car, an old washing machine will do as well. 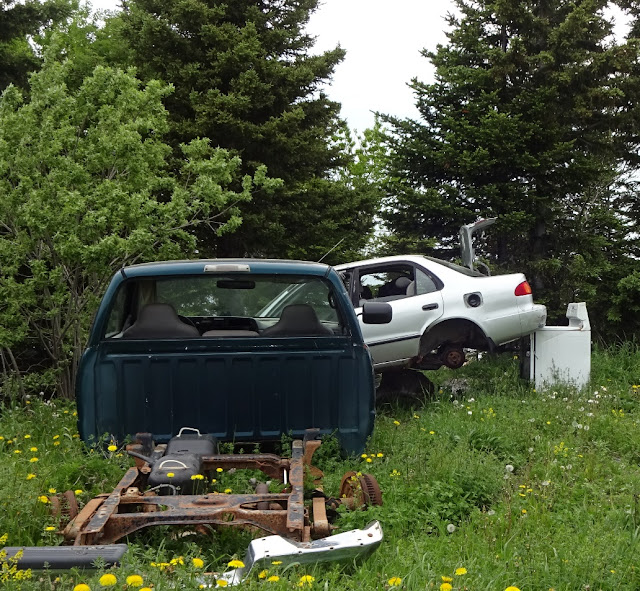 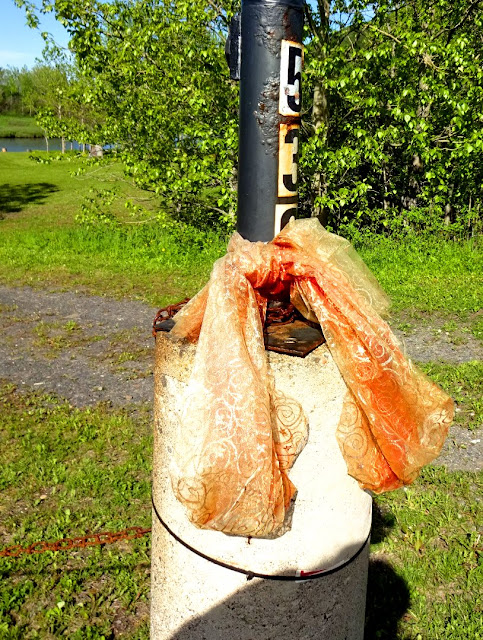 Filmy and glittery. Bling-bling and rust.


This is a storage shed now but it used to be the home for a family of eight. 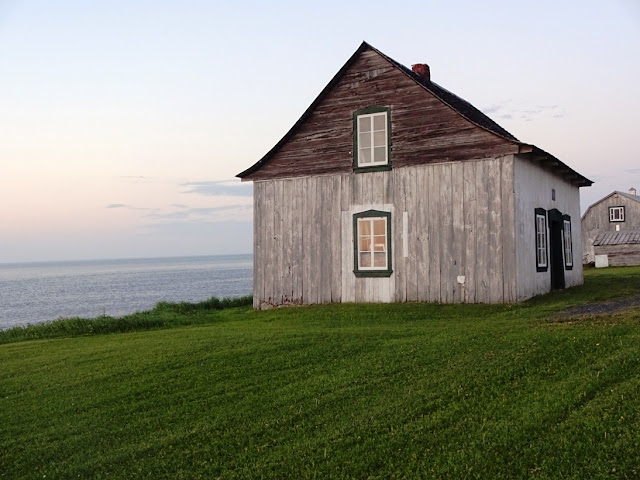 The St. Lawrence didn't freeze this past winter and there was damage along the coast from the winter storms. The beaches are wider, more sand and stones thrown up, the shoreline gouged away. These picnic tables, which used to be several metres from the edge of the beach, are no longer even on solid ground. 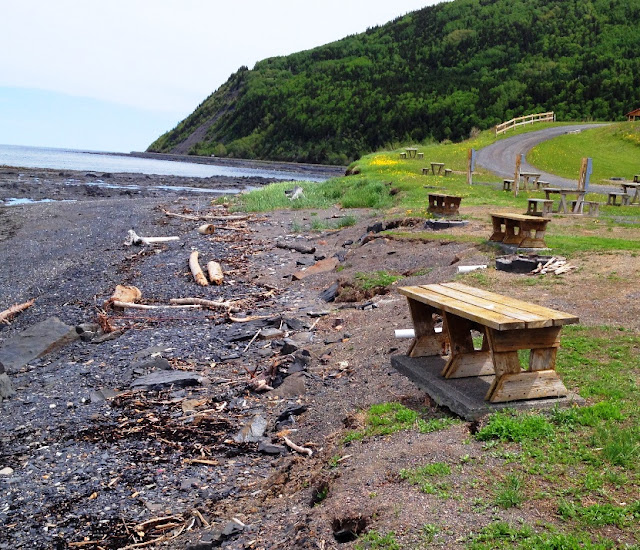 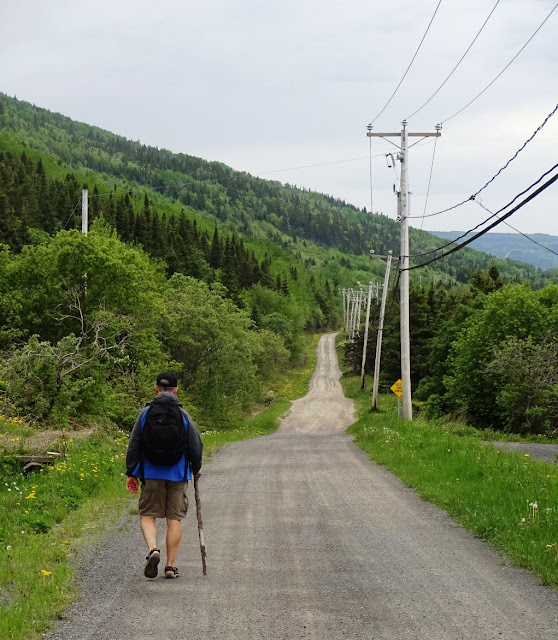