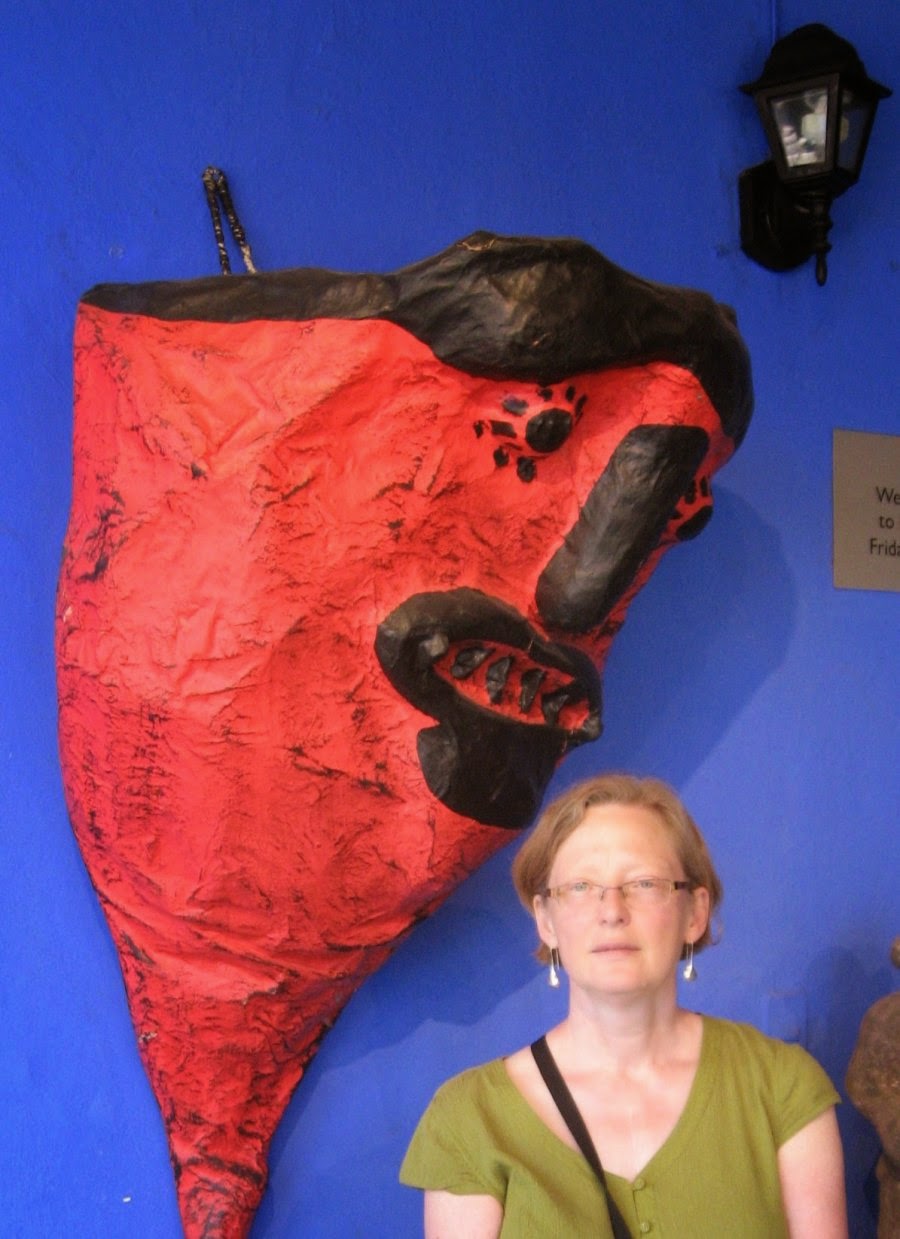 Here's me and a Judas head in Mexico City. Where else would that blue wall be but at Frida Kahlo's Casa Azul?

Judas figures belong to an old Catholic custom of making papier-mâché figures, representing Satan and Judas, which are burned, exploded, or flogged on the Saturday before Easter.

I'm thinking of them now because I was leafing through an old notebook and came across the drawings I did in Diego Rivera's studio. I wasn't allowed to take pictures inside the building, though no one stopped me from sketching--which, admittedly, is not one of my fortes. Still, you get the sense. 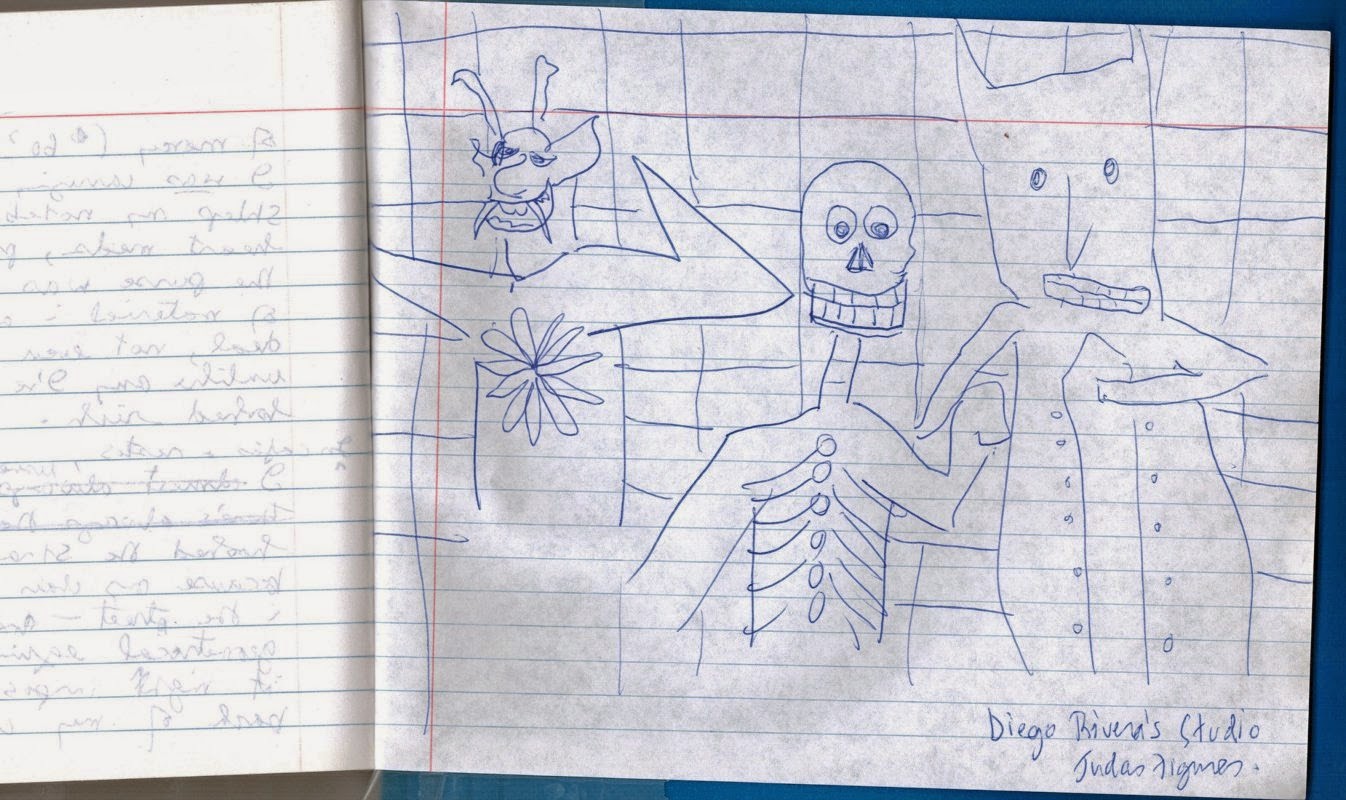 The bodies were about 10'/3m high, made of papier-mâché, adorned with buttons, bones, horns, stones and teeth, brightly painted and propped before a window of many panes. Diego Rivera and Frida Kahlo collected them. I suppose it was a way of never being alone in a room if you don't mind the company of demons.
I sketched this fellow too. I liked his metal-hoop ribs. I couldn't tell if his limbs were made of bone or wood. I didn't forget his eyes and nose. He didn't have any. Or maybe it was a she. 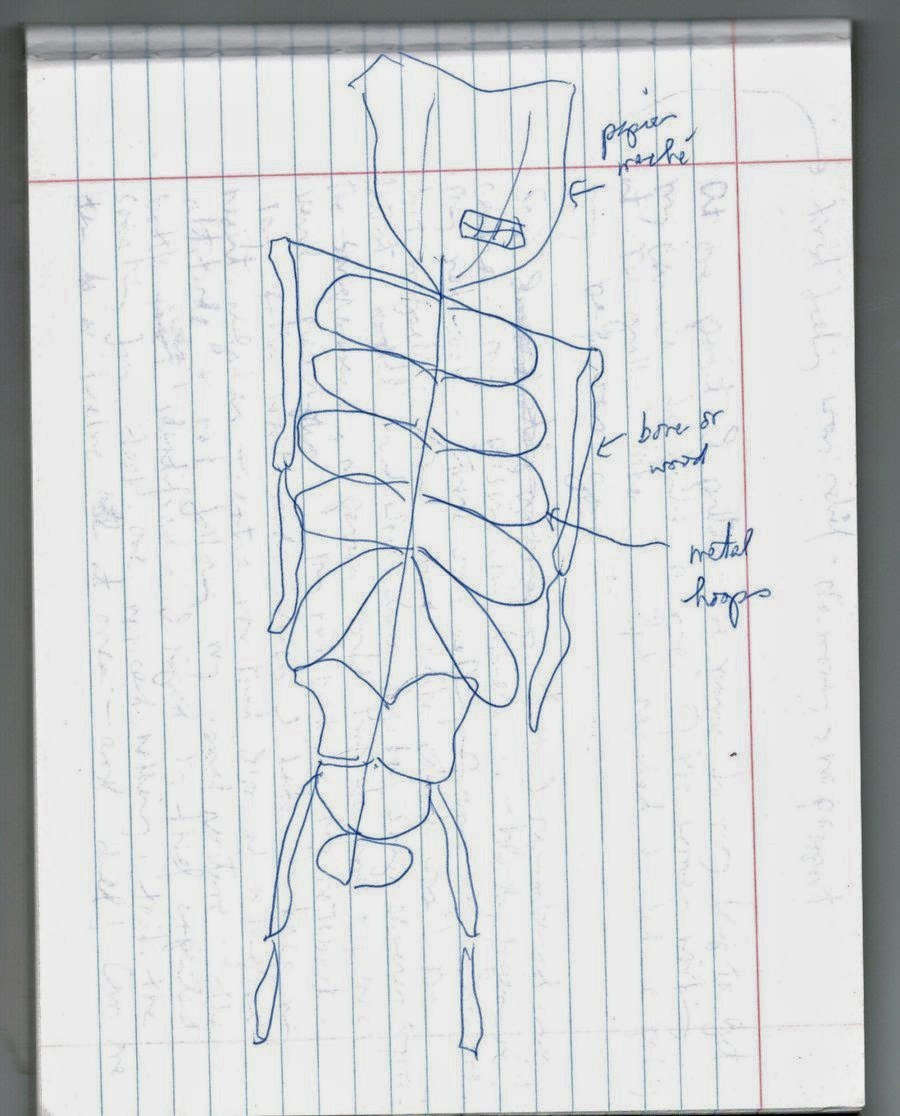 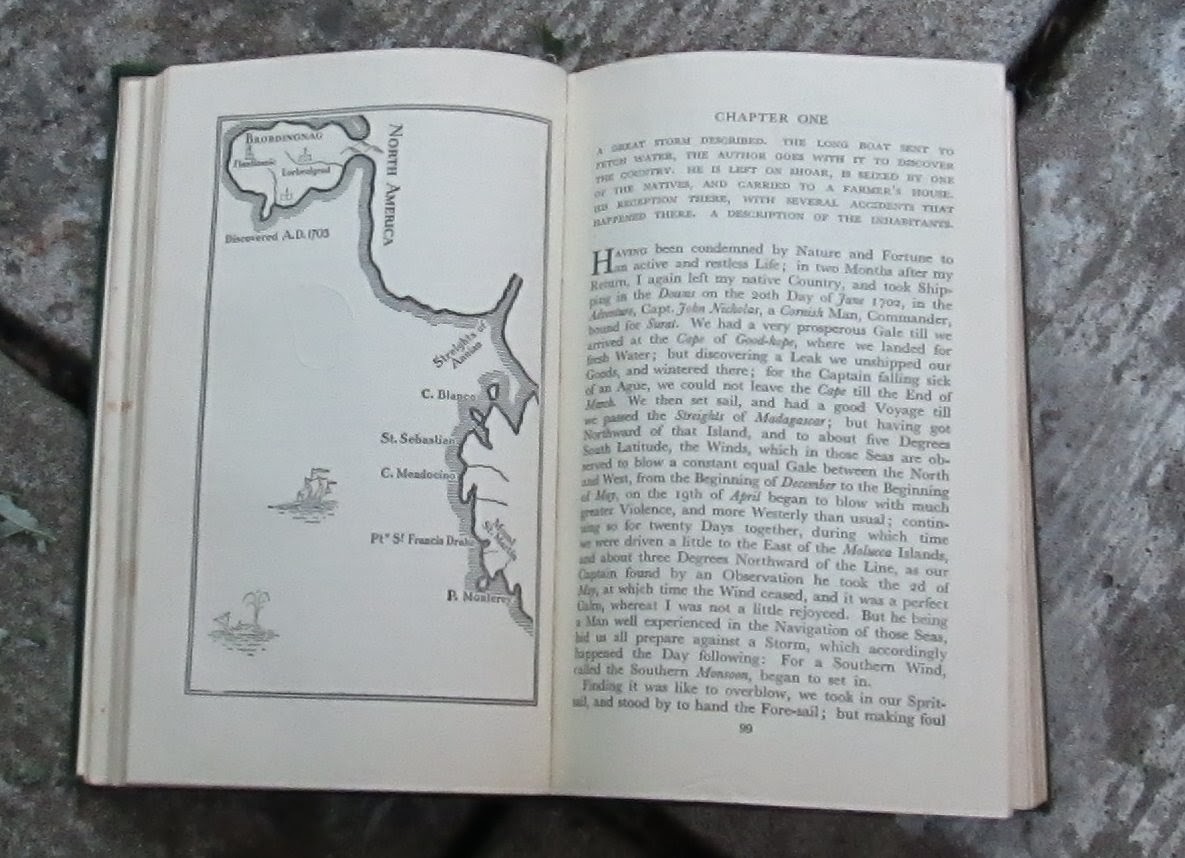 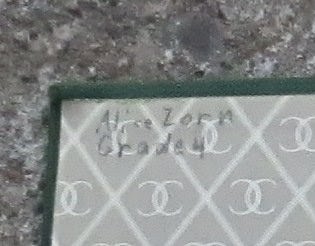 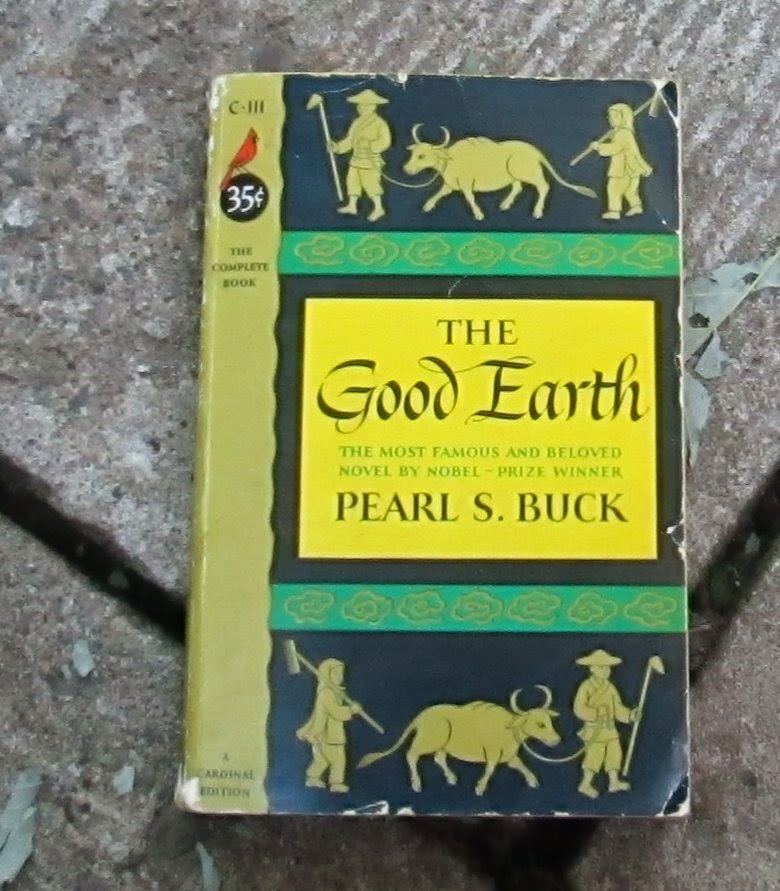 In Montreal it's hot and humid. Rather than complain about the heat, Rapunzel would sooner think about her garden. 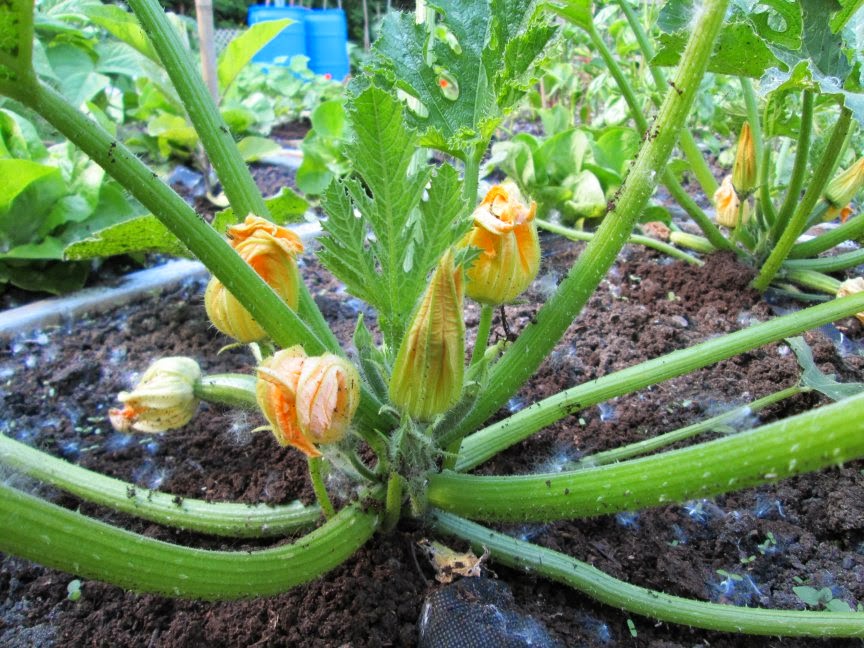 You have to remember she lived many years in a tower hanging her hair out a window. She doesn't always know what she's doing in the garden. She takes advice from strangers. That funny, fabric-looking stuff around the zucchini is something a man at the gardening center said would help keep the moisture in the soil. Does it? Who knows.
She still gets startled by worms and sow bugs, though she doesn't shriek anymore when she touches one.
It's a big incentive to see how the dried peas she poked into the soil a mere 5 wks ago have grown into plants almost as high as her shoulders. (Okay, she's short.)
The carrots, beets, basil, lettuce, beans are growing. There are flowers on the canteloupe.
The eggplant hasn't flowered yet and she worries because one of her all-time favourite things to eat is barbecued eggplant. She slices the eggplant, brushes it with a paste of olive oil, paprika and mustard, grills it slowly. It's good right off the grill and even more delicious cold the next day in pita with cheese and arugula.
So far she's harvested arugula, red leaf lettuce and a Boston lettuce. 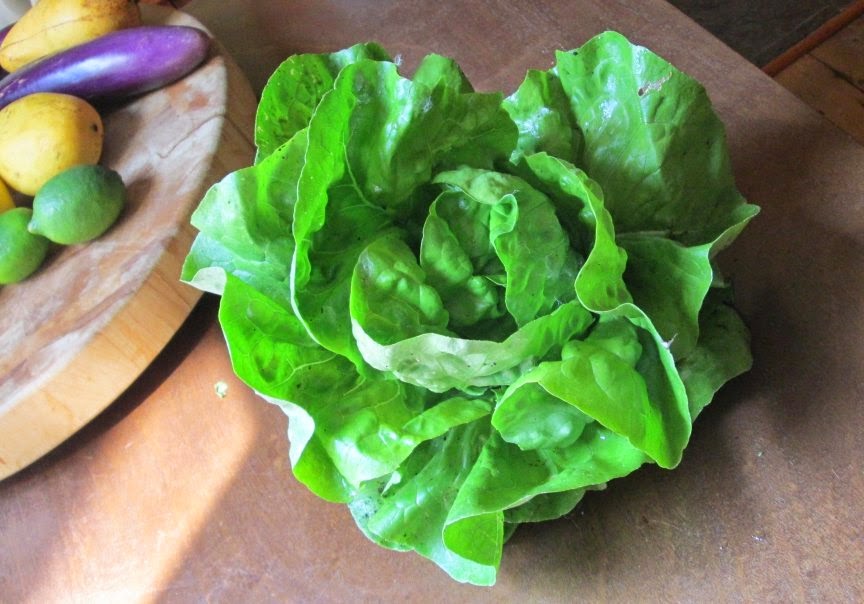 There weren't enough snow peas to make a meal, but enough for a snack. The white tissue bits on the tips are the flowers. Rapunzel thinks they should be eaten with the snow peas. Growing her own produce has made her hyper-respectful of all aspects of a plant. 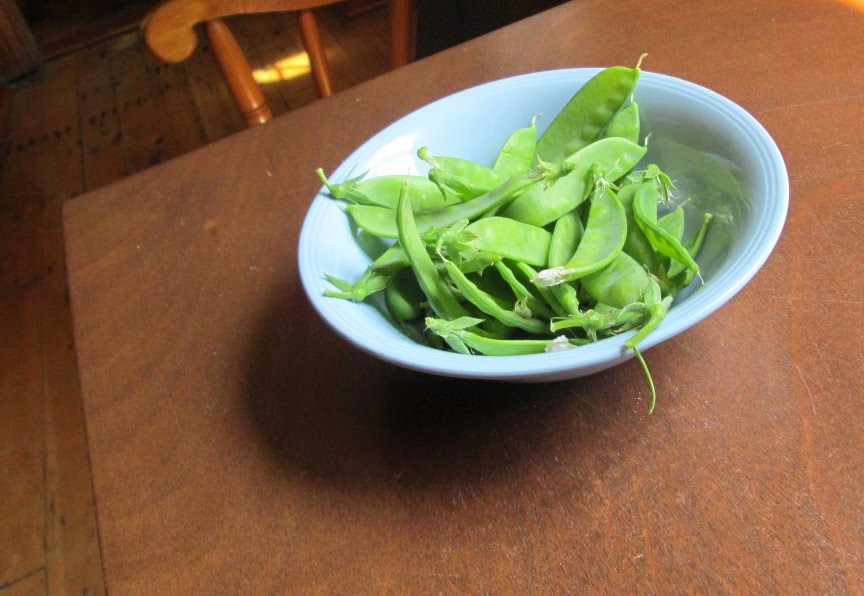 Nevertheless, she knows she has to nip suckers, prune lateral stems etc. Or at least, that's what she's read. When she actually trimmed some vines off the cucumbers that were threatening to choke the beans, the women in the saris stopped gossiping to cluck disapprovingly and shake their heads. Rapunzel tried to explain. "The cucumbers--the branches are getting too big." She waved her arms to demonstrate. "Big," the women agreed. But they would have done something else to control the cucumber, Rapunzel can just tell.

Off to the side of the garden allotments is a wooded area with picnic tables and a hammock--a very comfortable hammock. Look, there's a man having a snooze right now. 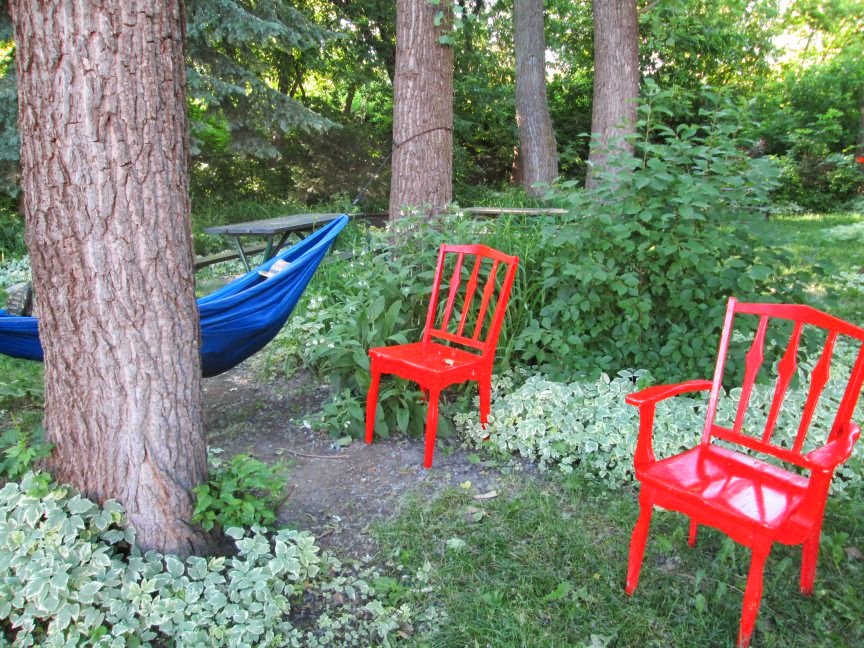 And yeah, isn't it amazing: all this in the city.
Posted by Alice at 1:40 PM No comments: