In 2016 I will be publishing a new novel, Five Roses, with Dundurn Press in Toronto.

The novel is not about flowers, though one of the characters is called Rose. 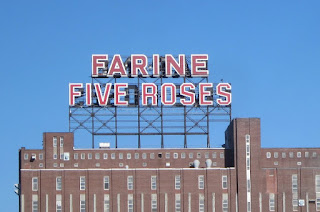 The title has to do with the FARINE FIVE ROSES sign which is a landmark on the south-west horizon of Montreal. From 1954 to 1977 the sign included the word FLOUR which was removed in 1977 in accordance with Quebec language laws.

I'm not writing about flour mills either, though the fact that industry once thrived in south-west Montreal is a significant factor. I am a little fascinated with abandoned industrial complexes. 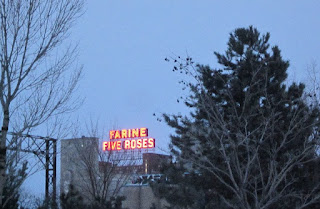 Here's the sign as seen from Pointe St-Charles where the novel is set. It's an inner-city neighbourhood being gentrified as I write. The neighbour a few doors down just had her brick redone. From another direction I can hear floors being sanded. Another neighbour is gutting the ground floor of his duplex. My novel takes place in the early 2000s when the process of gentrification in The Pointe was gearing up. For better or worse.

The setting of abandonment and appropriation reflects the loss and recovery the characters in the novel experience. A sister kills herself, a baby is lost, a mother dies. I'm giving nothing away here. These events have already happened. I want to know how the characters move on after a suicide, a lost baby, a death. There's no such thing as ghosts and yet. A house stands empty for a year. Two boys eat from a can of ravioli. One woman shows another how to fashion a rose out of marzipan. A loom is rescued. A baby howls with hunger. A chickadee pecks bagel crumbs from a young woman's hand. A man spies through gaps in a wooden fence. Rooms in an old house get a fresh coat of paint. There's cycling by the St. Lawrence River, a game of strip poker in a basement, a man practising fishing in the grass, a large orange cat. A woman climbs a rope ladder up the tower of a derelict factory.

I've tried not to overdo the number of times that characters notice the FARINE FIVE ROSES sign in the sky, but I've been interested in the sign since before I moved to the Pointe. I have a FIVE ROSES T-shirt. If I had a cellphone, I would get a FIVE ROSES cellphone cover. Are there FIVE ROSES lighters? FIVE ROSES jeans? Does someone have an old FIVE ROSES burlap flour sack? 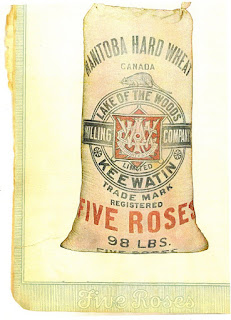 That's a photocopy of an illustration in a 1940s cookbook my mother-in-law had. When I first saw it, I knew I wanted a copy. It was long enough ago that I had a hard time finding a place that made colour photocopies. At the time I didn't know what I meant to write about it, but I knew I would.

Not so long ago a friend sent me this in the mail. 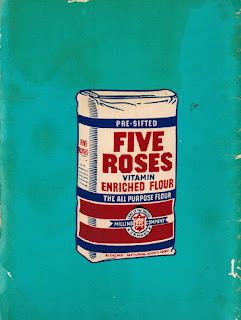 It's the back of a Five Roses cookbook that she found at a farmer's market in Victoria, BC. The cookbook dates from 1962. 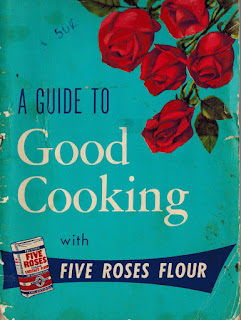 There are recipes for Whipped Cream Topping for Pies. (Silly me, I never knew I needed a recipe for that.)
Croquettes with this enticing description: "Five Roses Croquettes, with their crisp brown deliciousness, are a delightful food."
Witches Bonnets. This is a dessert and that's how it's written. No apostrophe.
Supper Snack--to be made with "White Sauce No. 2". 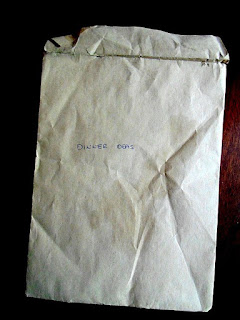 My good friend, Carin, is hosting this interesting blog project to promote awareness of litter and literacy. http://thelitteriseeproject.com/about/

To that end, she has invited writers to contribute a piece as suggested to them by a photo of litter they've either taken themselves or she will provide. There is unfortunately so much litter to choose from. Plastic trailed across fences, smeared along street curbs, tossed onto side walks, in the forest, on a shoreline...

I am honoured to join the illustrious littermates with "pureed frog".
http://thelitteriseeproject.com/category/alice-zorn/
Posted by Alice at 10:20 AM No comments:

how about walking 300 k in the Prairies? 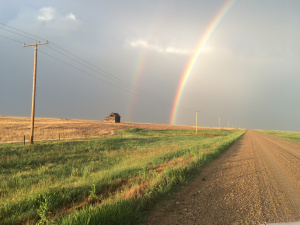 Here in Montreal we go for walks by the river. I know him as Matthew, but I see he goes by Matt when he returns to the landscape whence he hails.
After doing more well-known pilgrimages in Spain, Norway, and Ireland--and elsewhere--Matt decided to walk 300 k through the plains of south-west Saskatchewan along what's known as the North West Mounted Police Trail.

I'm proud of him for having walked it. I walk daily and always feel that's a way of being where I am in the landscape, by which I also mean urban landscape. I like to get from A to B on my own two feet, even if it takes more time. I have strong memories of places I've visited because I've seen them slowly--at the pace of walking.

To see the landscape and where Matt and his pilgrims walked, see this fine short video (15 min) by George Tsougrianis, broadcast by Swift Current & Area news.
https://www.youtube.com/watch?v=FLUdJZC72GU&feature=youtu.be&t=2m45s

To read more about Matt's walk, read his excellent blog entries for July, 2015 at http://somethinggrand.ca/

I believe the photo of the rainbow was taken by Bishop Don. 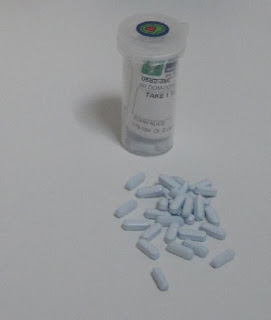 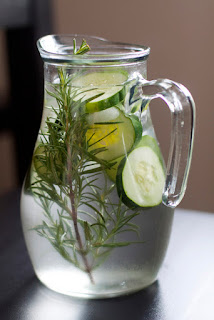 Last week it was hot in Montreal. With the humidity, it was over 40C (104F). At these temps my heart starts to feel floppy and irregular, and I am forced to stay indoors and do little.

Yet there I was, obediently staying indoors, not doing much, and drinking a lot, and my heart kept misbehaving. It seemed to me there had to be another factor involved--or at least, I wanted to find one. Anything but sit there at the mercy of my wonky engine (which is what I am, but that's my own existential crisis).

I finally realized that my heart went wildly irregular every time I had a large glass of the very cold water I was drinking to cool me down. Every time, too, my heart stayed irregular for a few hours. It's not a comfortable experience. I have mechanical valves and the beat is both audible and pronounced.

Cold water is hard on the body when it's already trying to stay stable in the heat. Sounds obvious, but it isn't. We live in an air-conditioned, pro-refrigeration society. We believe that when it's hot, we should be gulping down a nice, cold drink. I was recalling how, when I first visited my European relatives in the late 70s, I was never served cold drinks. My grandmother and aunts were shocked when I asked for ice. They said cold drinks were very bad for the heart. Screw that, I thought. Old-fashioned nonsense. I mean, here's a picture of my grandmother stoking the Kamin with wood. Does she look like a medical authority? 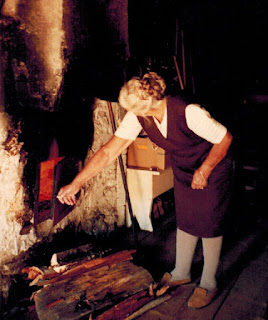 Well, in my case, it turns out she was right. I performed several admittedly unscientific experiments with cold drinks. I wasn't exerting myself in any way. My heart was regular. I drank a large glass of water direct from the fridge. My heart did its whoop-dee-do protest. I did it enough times to convince myself.

Since then, the weather has cooled down and I can tolerate cold drinks again. However, I now know that a cold drink during extremely hot weather is an extra stress which my heart doesn't need.

I looked online and found medical sites that confirm the effects of ice-cold drinks on sensitive hearts. However, I didn't find much information which is why I'm writing this. Even if you're in the care of an excellent cardiologist, it's possible you won't be asked if you were having an iced drink when you experienced your arrhythmia.

Note: if you have pronounced arrhythmia and are not already in the care of a doctor, you should see one. Nothing I'm writing here replaces the advice of a medical specialist. I'm writing an account of what I experienced. I'm familiar with certain aspects of my medical history. I've had heart surgery and am taking beta blockers and blood pressure meds.