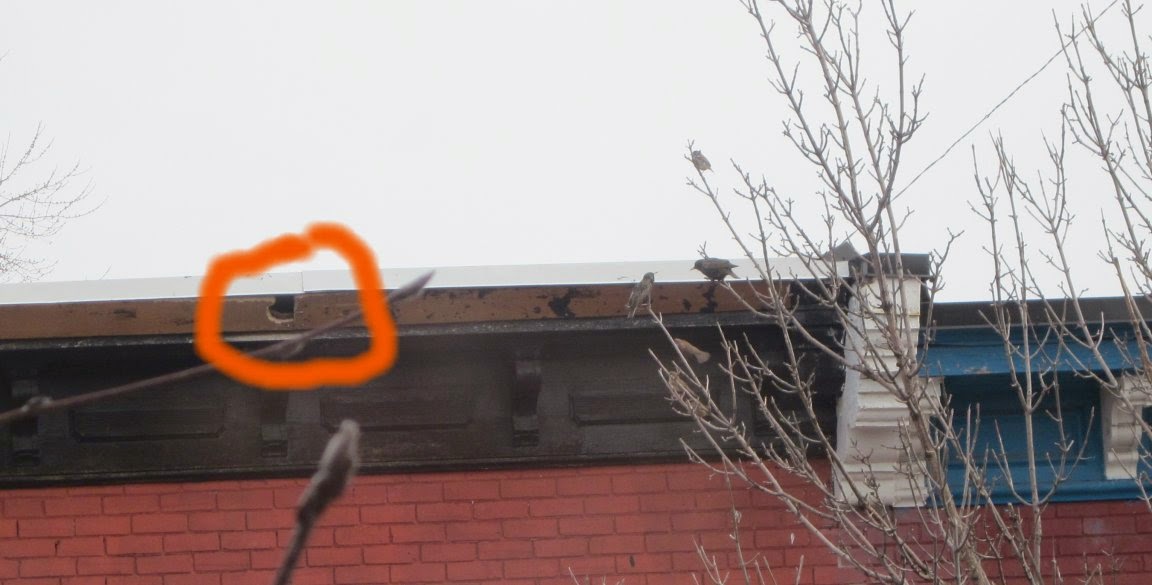 The view from my study is onto the carved wooden cornices across the street. For a couple of years now I've noticed that sparrows have made a hole under the neighbour's roof. They fly in and out. I assume there's a nest.

Today I was distracted by a commotion. The sparrows were fluttering and screeching because a squirrel was running along the edge of roof and wanted to investigate their hole. At this time of year, there must be eggs. The sparrows flew at the squirrel who was only a bit bothered by their puny beaks and batting wings. Sparrows are noisy but not exactly military machines. A squirrel weighs approximately ten times as much as a sparrow. The squirrel dodged them easily, scurried under the lip of the roof and inside the hole.

Oy vey! Oy vey! The sparrows made such an uproar that more sparrows came to commiserate. They lamented the pillage and slaughter that must surely be happening. Individual sparrows kept charging the hole to berate the squirrel, though none of them dared to fly inside. They were very upset. If I could have helped I would. I don't love squirrels. They've torn my backyard to pieces, shredded my flowers, turned my bicycle seat to confetti. Vandals they are.

I was surprised when several starlings--the larger, darker birds--joined the sparrows in the tree. They, too, flew at the hole and scolded. They couldn't make the squirrel leave either.

Still: I hadn't expected that birds of a different feather would join forces.

I didn't keep watching to see what happened when the squirrel finally left the hole.