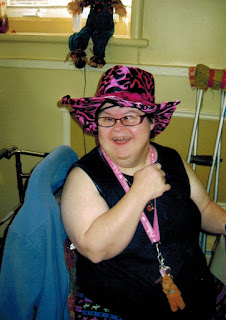 I've been reading some articles on the life expectancy of people with Down Syndrome, a couple of which claim that people with Down Syndrome can live as long as anyone else.
Every doctor or social worker, who ever talked with R about his sister, emphasized that by her early 50s she was already very old. A year ago she had a cerebral hemorrhage. Increasingly she had difficulty walking and used a cane. She wanted a walker and complained of arthritis. She was starting to forget dates--which felt serious because she'd always been the keeper of family birthdays. She was the one who called to let you know when an anniversary or birthday was coming up. 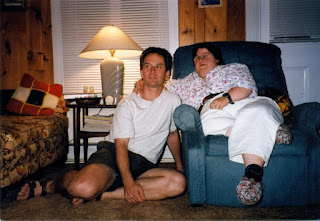 I'm finding it hard to write a post about Jo, whom I called Sue in my blog. We're still looking at the answering machine when we walk in the door because there was always a message. They invariably began, "J'ai quelque chose je veux dire." I have something I want to say. And even though we called her Jo, she always signed off as JoAnn, including her family name. As if anyone else could have stammered that incomprehensible blend of French and Down Syndrome logic. The way she made short work of words she thought too long. Her "diabetes" was "dibète". Not even R, who oversaw her affairs, understood her messages. He always had to call her back to ask what she wanted. 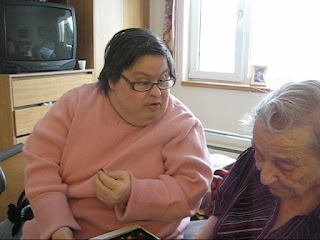 This picture was taken last winter, 2012, when R took Jo to see their mother in her nursing home. Jo is explaining that they're eating a box of chocolates which her mother claims she can't see. (Though she saw well enough to pick up the chocolates without fumbling.) Do you see Jo's concern and affection for her mother? 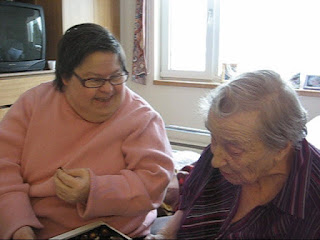 Look again. Four months later they both died on the same day. Jo was 55, her mother 96. Their urns were buried together. R.I.P.