is there room for humour in death?

When someone dies, we get solemn and sad. Of course.

But humour, even black, helps keep us sane.
Make no mistake, R was devastated when we got the call from the hospital in the night that his sister Jo had had a massive cerebral bleed and was brain dead--effectively dead.
The hospital kept her on a respirator until he and his brother arrived. When they got there, R said they kissed her and talked to her, even though they'd been told she was brain dead.
He finally leaned close and said in her ear, Jo! Des frîtes et un Coke? Fries and a Coke?
No response. He looked at his brother and said, She's dead.

Here's a picture of her waiting for just that to arrive: fries, Coke and a club sandwich. Get a load of that diner with frosted glass dividers. She's wearing one of her many hats. We've already spent the day with her and I was getting tired. 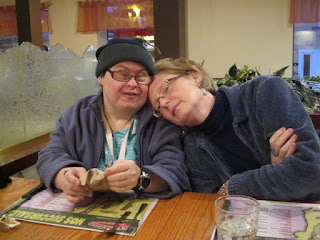