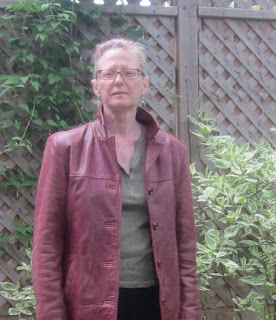 I have always wanted a pink leather jacket and last fall found one for only $10 in a secondhand clothing store. It's well-made and it fit me, and I was happy until I pulled it from the bag at home and discovered that it STUNK of cigarettes.
I hung the jacket outside in the sun for weeks. No change. I put the jacket in a bag with coffee beans for a few weeks, baking soda for another few weeks, sheets of fabric softener for more weeks. Nothing worked. I decided the jacket was a lost cause and in January pinned it to the clothes' line and forgot it. Snow, ice, snow, -30C winds, freezing nights, snow.
In March I brought the jacket indoors. It smelled scoured. I don't know if it was the wind or the snow or the freezing temps, but the cigarette stink was gone. I'd recommend this method--assuming you have access to a Canadian winter. 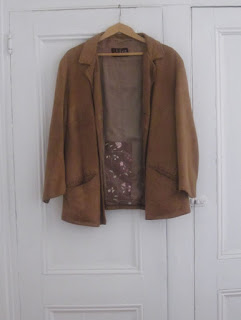 This next jacket is a hand-me-down from my father-in-law, who got it as a hand-me-down from his son-in-law, who had grown too chubby for it. (Both my ex-brother-in-law and my father-in-law were short. They had to be for the jacket to fit me.) With the decades, the suede has tried to revert to its original animal shape--except the seams won't let it. That's the only way I can account for its curled edges and stretches that now make it hang sorta shapeless. I don't care. It's comfortable. I wore it on at least two trips to Europe. I have a photo of myself wearing it in Paris. I also recall coming home from Prague in 1991 and needing to take it to the dry cleaner's to get the accumulated soot--from the air; coal stoves still in use then--off the collar. The jacket had already been cleaned once by my mother-in-law before she let me have it. She'd taken a wire brush, soap and water to it.
I'm guessing the coat was first bought in the 60s. The lining gave out once and I had it replaced--with the original label, "Victoria Leather Sportswear of Canada Winnipeg", sewn back onto the new lining. More recently, the current lining had a tear in the back and I patched it with embroidered satin. I like the colour of the jacket because it used to match my hair. The jacket hasn't changed colour. My hair has.

Another old jacket is R's Lee jean jacket he wore in high school. He thinks he got it in '69 or '70. After I badgered him long enough, he finally let me have it. Or wear it. He still calls it his. The collar is yellowed from use but the denim is still strong. I had the jacket on one day when I was talking to the president and CEO of Diesel Canada. (How, where and why is another story.) She said I was crazy to be wearing it on a casual daily basis. I should put it in a safe and wait another couple of decades when it would be worth lots. But I'd sooner wear the jacket.

I do occasionally buy a new, not previously worn jacket.