what I didn't see today 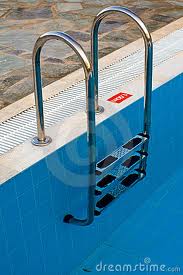 People wonder what it takes to be a writer. Quite apart from being able to keep the bum in the chair, mastering narrative arcs, getting into the skin of a character, having a notion of syntax, verb tense, pov and the like, is the very HUGE aspect of being able to see the world. There is all that we make up and concoct in our fiction--and all that we've scooped simply by keeping eyes, ears and antennae open.

Today I went swimming at a pool where I've never been before. I meant to go Tues and then Wed, but it took me until yesterday to figure out how to put on the obligatory bathing cap. Friends kindly sent instructional videos. Thank you. Friends gave me advice. Thank you.

The problem was that, unlike all the people in the videos who slip their caps on no problemo, I have a stub of a ponytail. So I can't tug it on front to back. I have to do it nape of the neck up. It took me a while to figure that out.

Next hindrance was that I decided to try on my bathing suit, which I bought last summer and have used maybe twice--and the leg holes sag! What gives with bathing suits? Every summer I buy one. Every next summer the elastic on the legs is kaput. I wasn't sure I wanted to commit to this swimming pool venture and didn't feel like spending $90 on a new suit right now. R suggested I sew the legs tighter, which sounded too stupid to credit, but then I thought what the heck. I have a... I think they're called a tankini top (which Google is telling me is not a word--grrrr!--am I the only one who finds Google rude?), which I could tug over the funny pleat on the hips this seam would make.

I thought a mid-April blizzard would be the perfect time to try the pool because who else would be so silly as to go out if they didn't have to? I changed, forgot my flip flops, remembered to bring a lock, did the bathing cap thing without attracting stares, showered, grabbed my towel, headed for the pool, took off my glasses, which I left with my towel, jumped in. Did three lengths and realized I had no idea how to get out. My arms aren't strong to heave myself out. As far as I could tell, the whole pool was deep end. I am extremely myopic. I squinted every which way. Was that a ladder over there, across six lanes, each of which was separated by some coiled contraption? I plugged my nose and ducked. Peered across water to make sure I didn't have a thrashing swimmer barrelling at me. These were the rapid swim lanes.

By the time I'd hauled myself out, I had the lifeguard's attention. Are you ALL RIGHT? She could see I was all right physically. She wasn't sure I was ALL RIGHT in the head. I explained that I'd never been there before, I wasn't wearing my glasses, and I couldn't find the ladder. Well, she said slowly, where are your glasses? Maybe you should put them on and check out the pool before you get in. There's a ladder there, a ladder there, a ladder there.

I think ladders should be painted a fluorescent colour.
Posted by Alice at 6:42 PM