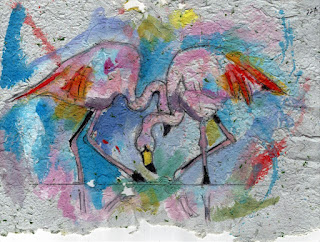 What does a writer do with all those draft pages? That assumes you write on paper as I do.

I can but don't like writing first draft on the computer, because I can't stop rereading what I've written, second-guessing myself. I move forward more efficiently when I write first draft longhand. And although I can write with ballpoint or rollerball or pencil on newsprint, I have my precious routines about using a particular format of hard-cover notebook and my Lamy fountain pen, even though the Lamy leaks unless I use a certain ink (not Lamy).

For a writer, what's important aren't the tools but the words--except that I'm also a human animal who likes her creature comforts. I like the smoothness of ink and nib when I'm writing on good paper. I like the bound notebooks because I only write on one of the facing pages and keep the other free for notes and arrows. 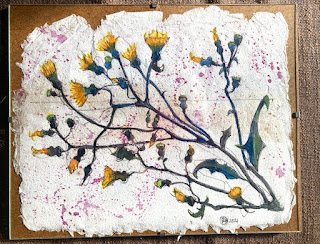 After a couple of hours, I dictate what I've written into the computer. From then on, I print pages of hard copy that I revise--again, by hand. I revise a lot. When I hear people boast that they've done five revisions, I have no idea what they mean. That would be me getting started. I use a lot of paper, but too many hours of looking at a computer screen give me migraines, and too many hours of typing aggravate my hands. Paper is a luxury I allow myself. When it's filled with sentences and scribbles, I dutifully drop it in the recycling bin.

And now R has begun making paper. A friend gave me a few sheets of paper she'd made and he was so pleased with the effect when he painted on it--how the paper took the paint, how the paint bled, how vividly the colours dried--that he decided to make some himself. He set up a table in the far corner of the cellar behind the water heater. 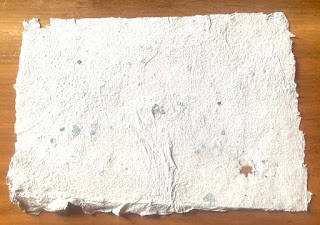 He needed a secondhand blender, a screen and a shallow tub. The blender took a while to find because they seem to get snapped up immediately in Montreal. For a few weeks we stopped at Renaissance, l'Armée de bon salut, the Good Shepherd, etc. He finally found a blender in a thrift shop on our recent visit to family in Ontario. He made the frame and screen he needed from a window screen I spotted in sidewalk garbage. Ditto the tub. He's set himself up in a far corner of the cellar.
This is one of the first pieces he made. 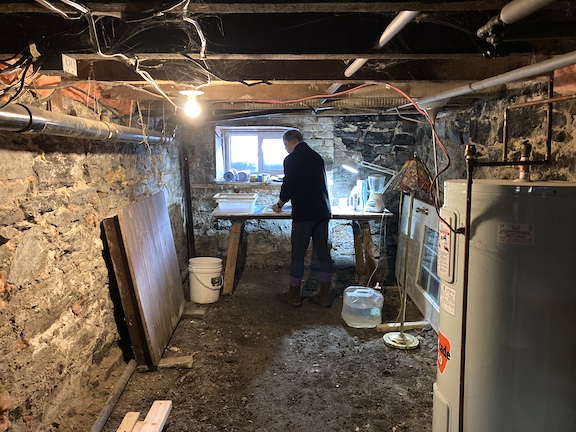 I have a dim memory of watching an artist years ago, cooking torn rags in a cauldron. Now it seems one speeds up the process of making pulp by buzzing it in a blender--and that the easiest way to get pulp is by using old paper.

Except R doesn't want to use old envelopes. He's asked for paper from my recycling bin. He wants story ideas. He says he's making "solidified narrative". 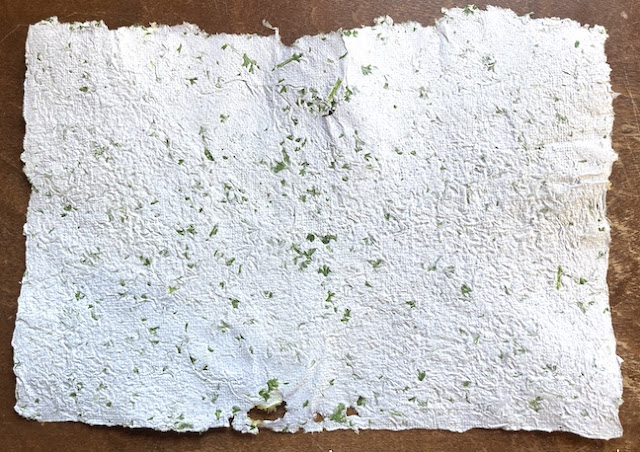 He's been adding different bits to the pulp for texture and colour. This one has parsley. It's the paper he used for the Pink Flamingos up top.

Why Pink Flamingos? No idea. That's his story. I had my chance when I wrote words on the paper. 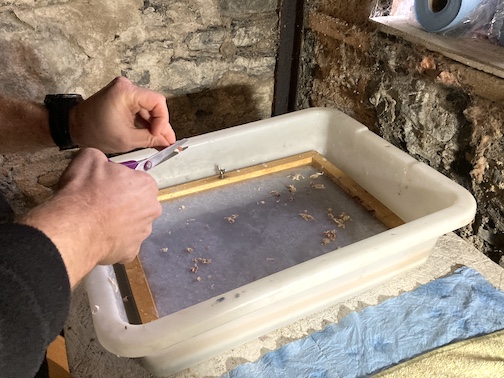