Recreating taste memories. Does it ever say in Proust who baked the excellent madeleines that sent him into 3000 pages of memory? 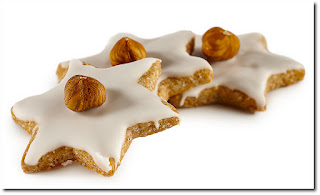 R often refers to the Austrian cookies that my mother baked at Christmas. He has no way of knowing what the original cookies that I remember from my childhood tasted like. She used to make Haselnußsterne, Rumkeks, Vanillekipferl, Lebkuchen, Krapferl...
In later years, she made only one or two kinds per Christmas. With the years, too, she adapted the recipes to accommodate her tastes and an intolerance to wheat flour. 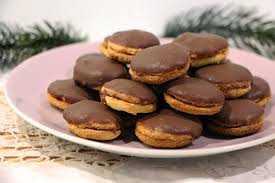 I rarely eat sweets. I don't need to make cookies for myself. But R has delirious memories of the time he feasted on a platter of what he calls sandwich cookies. As he remembers them, there were two cookies with a jam filling and iced with chocolate. Every year, when the holiday approaches and I ask if he would like me to make Austrian Christmas cookies, he rhapsodizes about those sandwich cookies.

I assumed he meant Krapferl--two cookies with an apricot jam middle and iced with chocolate--but no, he says sadly, that's not them.

I leaf through the disintegrating pages of the Viennese cookbook that my great grandmother gave to my grandmother who gave it to my mother when she emigrated to Canada. There is no recipe for 'sandwich cookie'.

Among the recipes, I see that my mother made an X next to a recipe called Haselnußkücherl--little hazelnut cakes. They have a top and a bottom with a filling of ground hazelnuts and rum. When I was a child, she iced them with rum glaze. 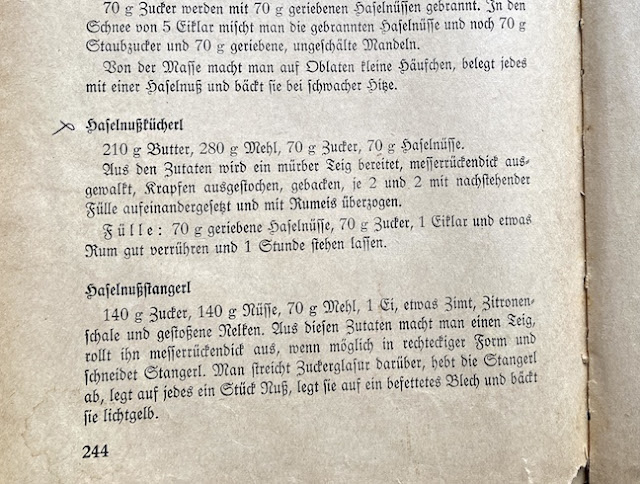 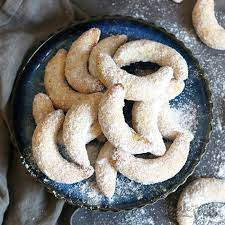 By the time R was coming to my parents' house for the holidays, she filled them with red currant jam and iced them with chocolate.

So these might be what he's calling sandwich cookies, but that doesn't help me much since by R's time, she was substituting ground oats, ground almonds and ground hazelnuts for wheat flour. But in what proportion?

I made a few guesses and baked the cookies. Good, R says, but they should be puffier.

I've told him Austrian cookies aren't puffy. I remember, though, that my mother often added baking powder to recipes that didn't call for any.

It's possible that R will never get the cookie he wants since he's fixated on a memory of a variation that cannot be repeated. I should also add that the challenge is entirely in my own head. It doesn't matter to him whether I make the cookies or not. But if I make them, he will offer an opinion. That is our dynamic. 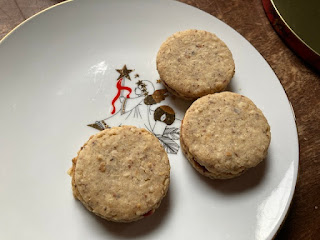 I made another small batch with baking powder--and although they still aren't exactly as he remembers them, he finds them pretty good. He must. There are only three left, even though I haven't iced them yet. They taste like ground oatmeal and ground hazelnut shortbread. Homemade raspberry jam filling.

I might now make another batch and ice them.

I wish you all happy holidays, however you celebrate the time off. Be careful. Stay safe. Today is the shortest day of the year. As of tomorrow, there will be more light.

ps I did not make all the cookies above this year, but I've made them other years.