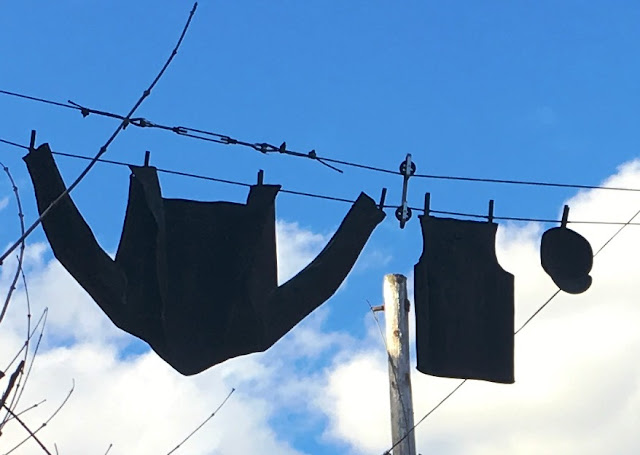 R had gone to find a free parking spot in a city not known for free parking. I thought I might have a nap. The hotel room was tiny and on the top floor--once an attic?--of a limestone building. It had a gabled ceiling and a skylight. 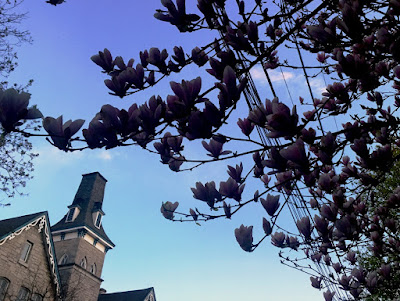 Nothing but the slanted lines of the ceiling and the hole onto the sky were similar, but I was reminded of the attic room in the hotel in the Marais where we stayed in 1985. It was late October and wind blew in around the badly sealed, thin window. Not just late October, but Halloween! I was curious to see how Parisians carved pumpkins. They didn't. The evening was wet and black, the streets slick. Rain was battering the leaves off the plane trees. The French might not celebrate Halloween, but Toussaint--All Saints' Day--on November 1st was a holiday. Banks closed, no ATM machines in 1985, tough luck stupid Canadians. 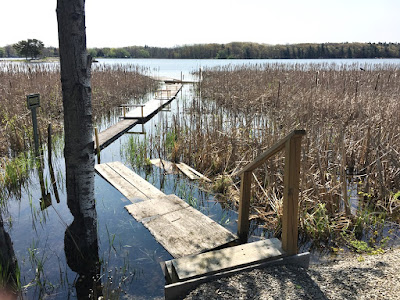 Last Friday we drove from Montreal to Cornwall, then cut down to the "old country road"--Hwy 2--along the shore of the St. Lawrence to where it meets Lake Ontario. Century-old barns, swamp, rock-knoll islands, bridges to the US, and flooding. Trees stood in water, houses had water at the doorstep. Or worse.

A man once told me his dream was to build a small house on an island just large enough for himself, his dog, his guitar. I'm wondering if he did. If he still has enough room. 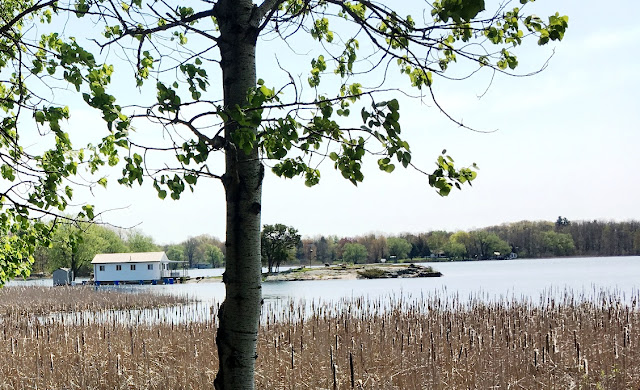 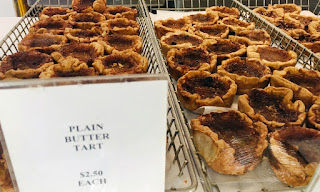 We stopped at a bakery in a small town for lunch. Our sandwiches, made to order at a counter, had a bewildering variety of options for the unprepared. Six kinds of bread. Butter? You want butter?  Mayomustard? Oniontomato? Picklettuce? Saltpepper? The woman making my sandwiches had fingernails three inches long in that shade of emerald green I remember from school pencil crayons. The bakery sold date squares, peanutbutter cookies, tea biscuits, banana loaf. 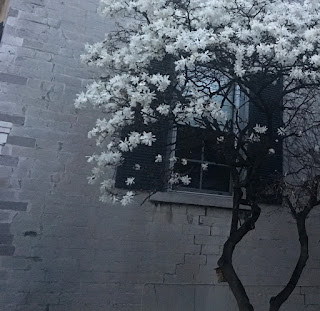 Our tiny room in Paris was five flights up, with each stairway becoming narrower and plainer as they ascended. Structurally, how does one do that--shrink the width of staircases? The stairs at the bottom were marble. The last two flights were wood and had no bannister. We also had the smallest WC on our floor. It was in the hallway as was common at that time in inexpensive hotels in Europe. The size of a closet, a toilet, no sink. The window was usually open and the pigeons, who were cold too, would fly in. I learned to bang on the door and wait for the whack and flutter of wings before opening it. Tough luck about the bird shit on the toilet seat. 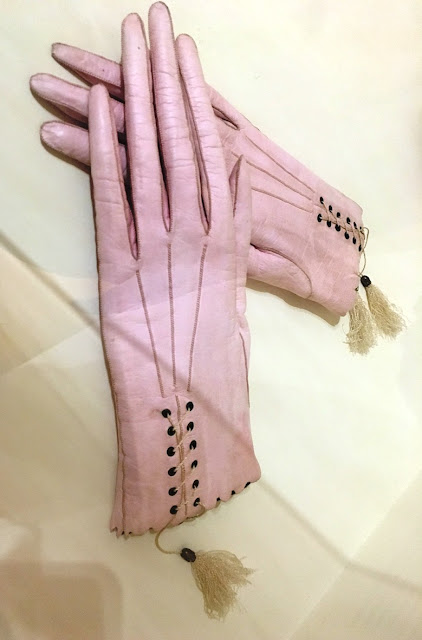 The sink was in our room. Like the stairway, the WC, and the room, it was also diminutive. The size of a modest salad bowl. But--very important since this was where we had sailor's bath (soap and washcloth) and washed our hair--it had a swan's neck faucet. We didn't take rooms if they didn't have a swan's neck faucet.


There was a shower available in the hotel, but it cost almost half the price of the room for a night and the hot water was iffy. Not always hot, not much of it. Still, every few days I would go downstairs with the necessary francs to get the key for the shower.


The man at the desk wore a leather jacket and gloves. When I complained that our room was cold, he mocked me. He said we were Canadians and should be used to cold. He was Algerian. He also told me that cold was good because it killed germs. Ça tue les microbes. Those silly words have become snagged in the verbal loop that will play through my brain till I'm demented. Maybe even then. Ça tue les microbes. 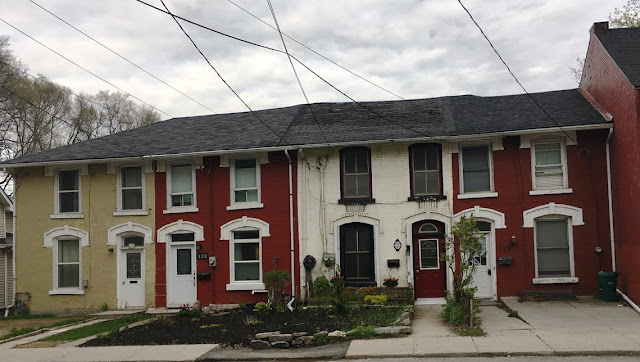 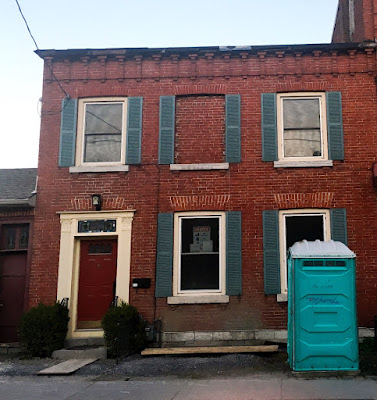 The fellow at the Farmers' Market this past Saturday probably won't stay with me for 34 years, but I recall one line of dialogue for its courteous honesty. In the morning, when I walked through the market, I stopped to look at the jewellery he had on display. He said he cut and polished the stones himself. I do not need more earrings but I liked the ones he had. Later that afternoon, when we walked by the market again and he was still there, I told him that I didn't buy anything that morning but I said I would if he was still there in the afternoon. He said, "I'm sorry, I don't recall that conversation." No, I said, I was talking to myself. 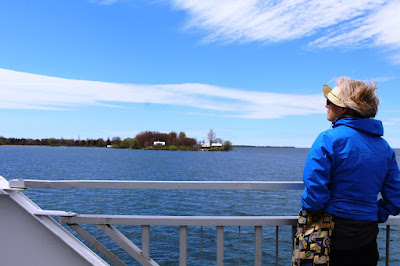 When we got to Paris we took a room on the Left Bank. At first glance it looked clean, but getting out of bed in the night I stepped on olive pits and baguette crusts. We left the next day and crossed the Seine to the Right Bank. Although our room under the skylight was cold, we stayed there for 12 nights. I kept a record on the back pages of my notebook--mostly to keep track of how much money I was spending. I'd brought $7000 to last me for however long it would. R had a similar amount. Both sets of parents were disappointed that, instead of making a downpayment on a house, we went to Europe to drink espresso and look at art. 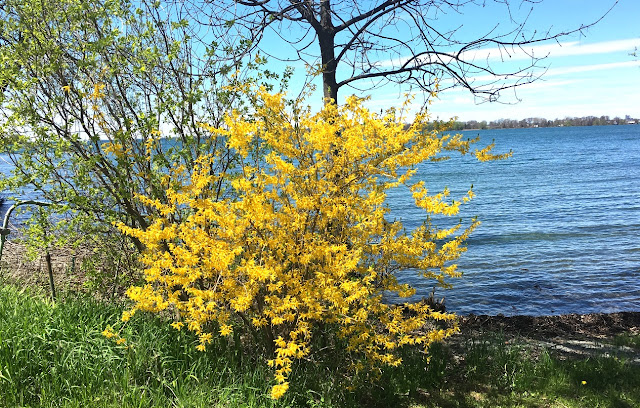 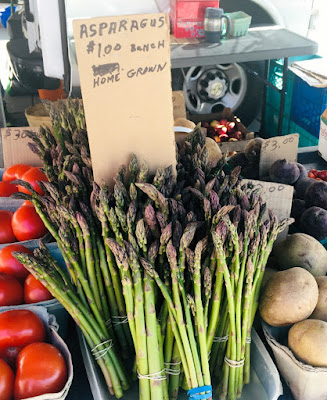 This past weekend we had blue skies and it's spring. Tulips and magnolia in bloom. We took the ferry to Wolfe Island. We walked. Had good food and drink. Breakfast and supper outside. A full moon on the lake. Another tiny attic room with a skylight--and a bathroom.

Pics were taken en route, in and around Kingston. Pink kid leather gloves with tassels courtesy of the Agnes Etherington Art Centre.