The placement of the park benches aren't accidental. They're ranged where once there were church pews facing an altar.

Saint Anne's Church was opened in 1854 to serve the Irish Catholic community of southwest Montreal. The church was demolished in 1970, though some still remember it as a church. I walked past a few years ago and an elderly priest and a few parishioners had gathered for a small ceremony. More often I see someone sitting on a pew, checking their messages, having lunch, or a smoke. I've sat there myself. I *hope* it's a zoned and protected green space, though who ever knows? There's a height restriction for buildings along the canal that some developers have clearly surpassed.

I pass this ghost church at least once a week depending on the route I've chosen to walk home. It's at the bottom of de la Montagne where it meets Wellington in the now-trendy Griffintown neighbourhood. "G-town" as some marketing firms are trying to brand it. Given the endless mushrooming of condos in this sector, it's all the more surprising that the site of the old church has--so far at least--been left intact.

I had to take a picture while walking past today because I don't know how much longer it will be there. 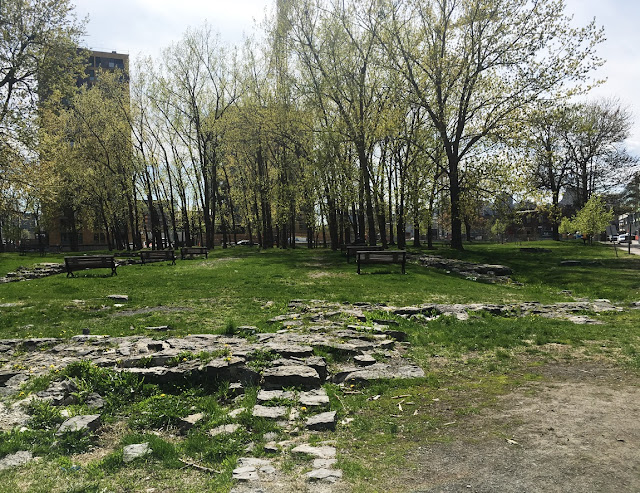