backyards (and Omas) once upon a time

Theresa's essay on the clematis that they planted when they first settled in their house on the Sechelt Peninsula in BC made me think of the clematis that we first planted when we moved into our house in Montreal. I appreciate her nod into the past and looking forward (stubbing her toe) on the future.
https://theresakishkan.com/2019/05/13/so-we-plant-for-the-future-and-for-the-past/

Ours is a very small, inner-city backyard in Montreal. When we moved here, we had the tendrils of a clematis snaked over the neighbour's fence. We went to the local Ukranian Tire and bought our own. That was our first year in the backyard when we thought we had enough sun for a garden. We don't. (That's why I have a plot in the local community garden.) That first summer I planted canteloupe that trailed long vines but never any melons larger than capers. The squirrels uprooted the neat rows of lettuce that attempted to sprout. Ditto the pansies in the flowerboxes.

The clematis had to do plant battle with the ivy that was invading our fence. I wanted the clematis that bloomed and asked R if we could cut back the ivy. The deciding factor were the mosquitos that lived in the ivy.

I remember our first weekend visitors to the house, R & R. (I do know people whose names don't start with R). They arrived just when the clematis started to bloom. Every year since then I've waited till the first week in July for the clematis to bloom because that's when it bloomed that first year. Though it sometimes blooms mid-June. I remember one of the R's wandering around the backyard in bare feet, looking up at the maple. I remember the other on her back in the grass in yoga pants and bra doing exercises in front of the clematis.

Not only the ivy, I'm remembering now. There was an ash tree, a mulberry, a sumac, a cedar, a cherry tree, a maple. As I said, it's a tiny space. Twenty strides from our back door to the back gate. It wasn't a backyard, it was a grotto. As the summer progressed the greenery got scrawny and leggy because there wasn't enough light. Decisions had to be made in the interests of a few against the many.

Now we have clematis, the maple tree twice as tall as the house, a bush whose name I don't know, raspberries, and two new black currant bushes that apparently like dappled light.

Our clematis has not even sprouted leaves yet, while Theresa's in BC is blooming. 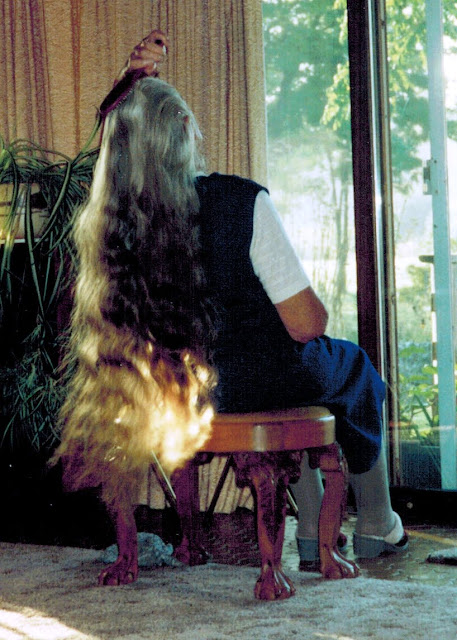 I've just searched through the box of photos but can't find any to show you the backyard when it was a grotto--except for the one that includes bra and yoga pants which she wouldn't appreciate.

Here, instead, is another photo I found of my Alpie grandmother at 90 brushing her hair which she would later braid and pin up into a bun. She refused help brushing her hair, though she nearly tipped backward every time she got halfway down.

There is no relationship between our backyard and my oma, except that today I was talking about Austria and it seems to be a day of memories.
Posted by Alice at 9:44 PM