September by the sea. The first day was cool. I dressed in layers, though R wore shorts--on principle. By the last day, it was so warm I wished I’d brought shorts too. 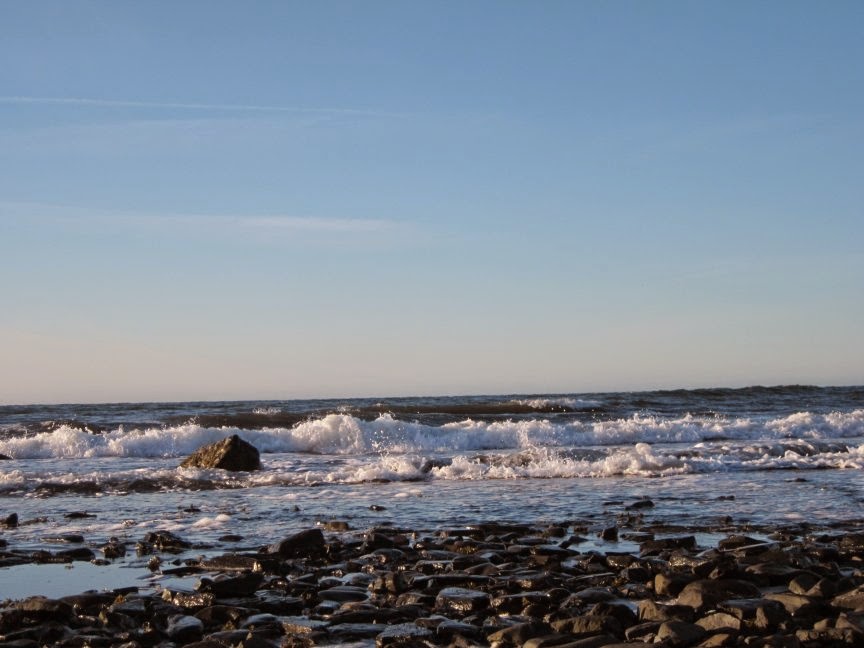 I take endless pictures of water. I can't help myself. I take videos, too, so that when it's January and the deep-freeze has set in, I can remind myself of what moving water sounds like. 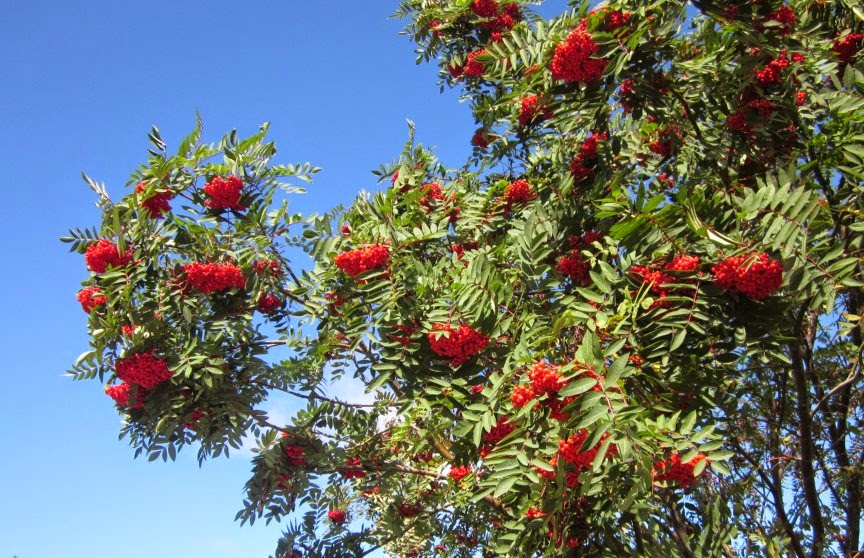 According to lore, when there are this many clusters of fat berries on the mountain ash trees, it will be a long winter. Except I think Climate Change trumps the Farmer's Almanac, so who knows?

One of the errands we had to do while there was pay the man who cuts the lawn during the months our house sits empty. He keeps the number of times he cuts the grass written in a small notebook. We aren't sure if he charges by hour or by the number of visits. Every year--the longer he knows us--the less it is.
R had gone to the side door of his house to ask his wife where he is or when he'll be back or if she has an idea of how much we owe him--though she always says she can't make heads or tails of his scribbles to do with grass and keys and cords of wood.
I sat in the car, watching a cloud cross the ridge of the mountains. The wind was so high the cloud was moving with the dogged headway of a man who wasn’t late for work, but would still just make it in time and couldn’t stop to say hi to a friend. I could see him want to stop in the way the cloud wisped around the edges. On the clothesline shirts ballooned and snapped. Those weren’t dollar-store clothespins like the ones I use in the city. There must be special Maritime-grade clothespins that grip clothes tight.
I could have gone with R to the door, but sometimes I'm lazy about trying to understand rural French. The wife is friendly and always has lots of gossip—about the boy who lives in the next village who was exorcised when his grandmother's cut-glass sugar bowl and creamer jumped off the shelves and crashed, about the bipolar couple who’ve taken refuge from society by living in a yurt (which she calls a yogurt) in the woods. This year was full of news because—we’d heard it on the news in Montreal—Hurricane Arthur had touched the coastline.
Ramparts of clouds had cleared the mountains, the laundry still hadn’t torn off the line, and finally I got out of the car. The neighbour very nicely spoke more clearly for my benefit. The washing machine chugged beside the door. The house is a large square box with many rooms. Only the two of them live there now that their children have grown up and moved away, but she must have decided that having the washing machine right next to the door was the most practical arrangement for getting out to the clothesline.
Her front windows face the sea and the house across the road where his parents once lived and where his older brothers were born. It looks like a storybook setup, but it's not. It's a real house where a family of four used to live. Right behind the house drops the edge of the cliff. For scale, that's me standing in front of it. 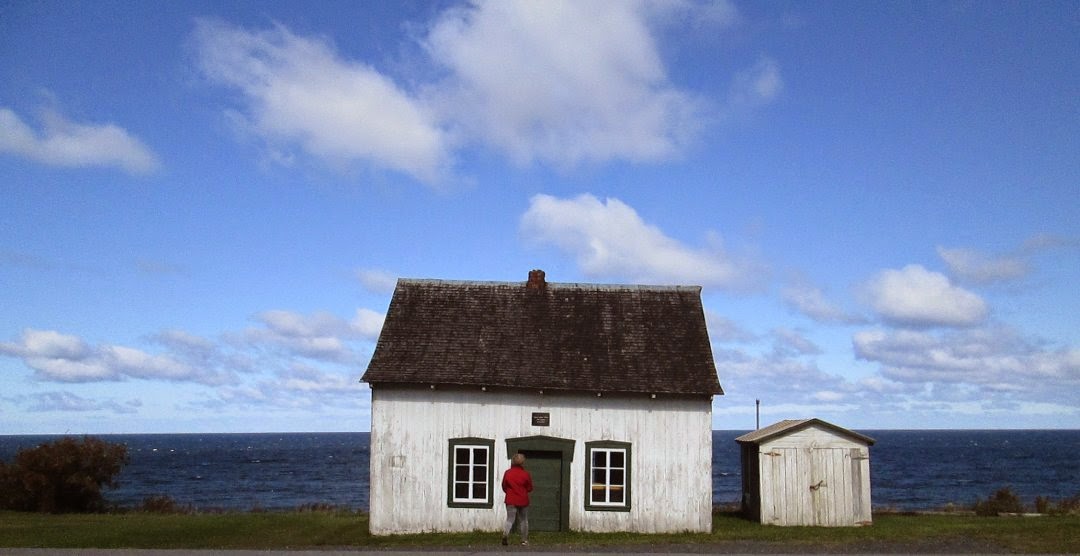 He keeps it whitewashed because tourists stop to take pictures. Once, in Montreal, we saw a calendar featuring scenes from Quebec with this house on the cover and we got it for him.
She told us her husband was out at his camp cleaning up the damage from Arthur. The rain had come down so hard and so fast that a deluge of water roared down the mountain, tearing up trees, taking the most convenient path which was the old logging road. 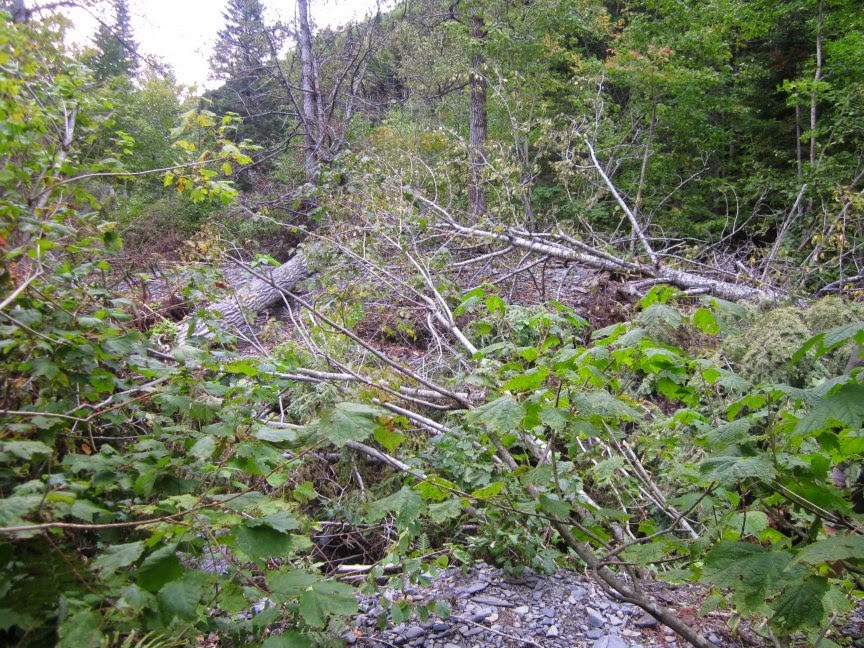 Work had been done on the road in the two months since Arthur passed, but we still had to park and walk two miles into the camp. (Canada uses metric, but old-timers, even Quebecois, still talk in miles.)
We found our neighbour working with another man, attaching heavy cables onto tree trunks and hauling them to where he would take a chainsaw to them. The violence of the damage was appalling. He said he had a path of wrenched and crashed trees all the way up through his ten miles of land into the mountains. I was surprised by how specific the path was: gaping holes in the earth where trees had been upended and only a few feet away, a whimsical bridge—built from old barn doors—across a trickling stream. 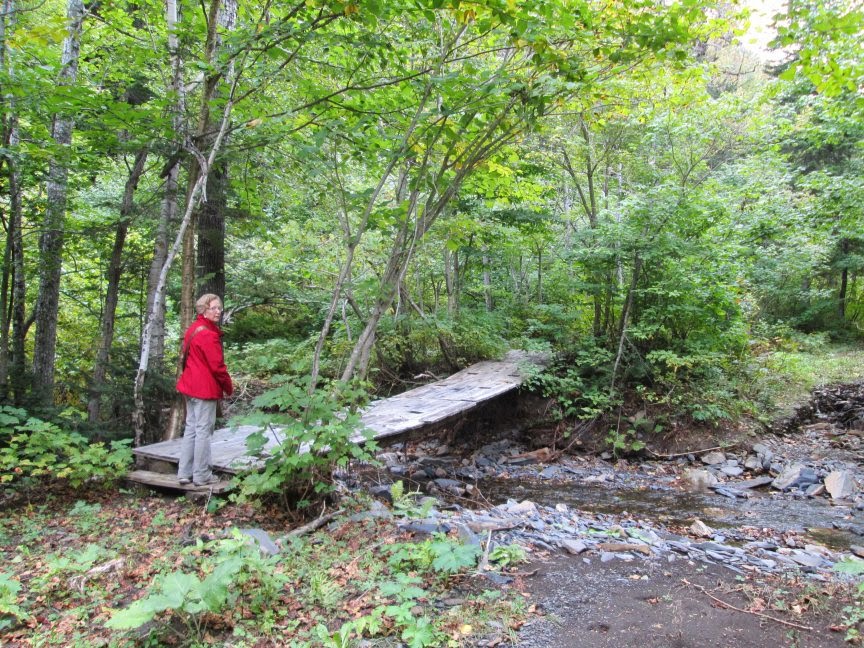 I don’t look sure I’m going to trust the bridge, but I did.
His camp, too, wasn’t damaged. 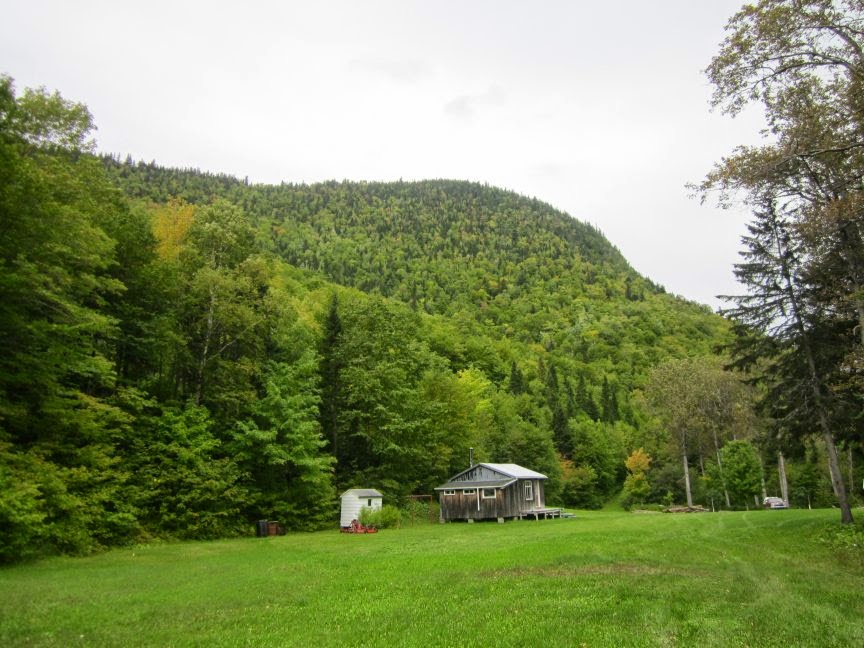 He stopped working to give us a tour of his chalet. In Quebec, cottages are called chalets. It's built of recuperated barn board. Inside, it's one large room, about twice the size of the home his parents and brothers lived in, with linoleum flooring, and many rockers and chairs because the whole family—all 26 of them!—come for Christmas supper. There’s a sink with running water that works on gravity (water coming down the hills), a gas stove, several tables pushed together, Christmas lights permanently strung across the ceiling, an oil painting of a deer in the woods.
R supposed out loud that the little white shack behind the chalet was an outhouse. Nope, there was a proper toilet. With a flourish the neighbour opened what I'd thought was a closet door. He was proud of how organized his chalet was.
Beds? R asked. The couch folded out, but it was rare anyone slept there with the big house so close by.

We spent the rest of our days reading by the fire, tromping along the beach and exploring the coastline. 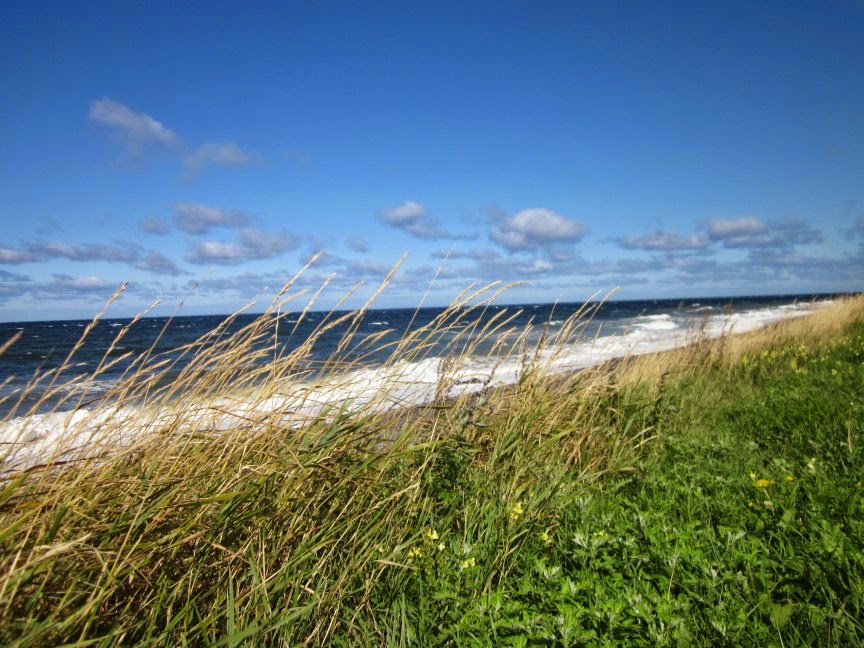 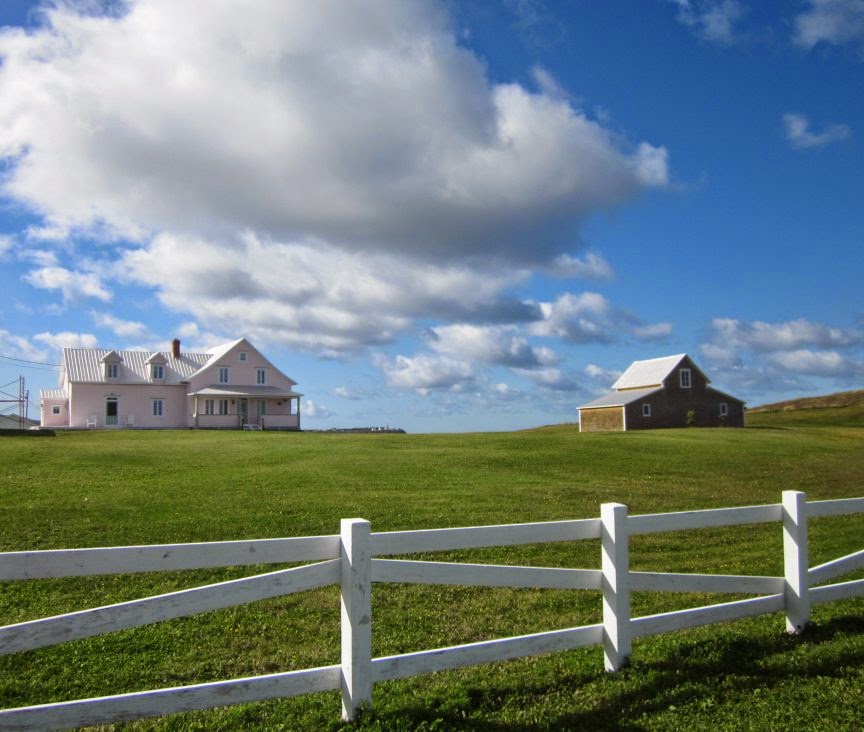 This house is in the village of Sainte-Madeleine-de-la-Rivière-de-Madeleine. Just in case you get it confused with another Sainte Madeleine. 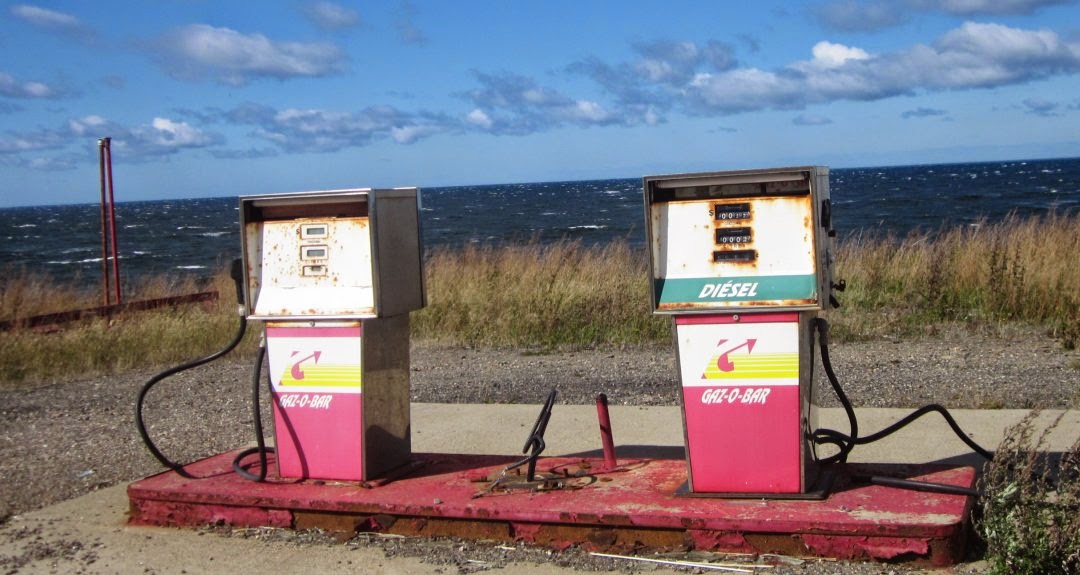 Here I found a kiddie swing and squished myself onto it. 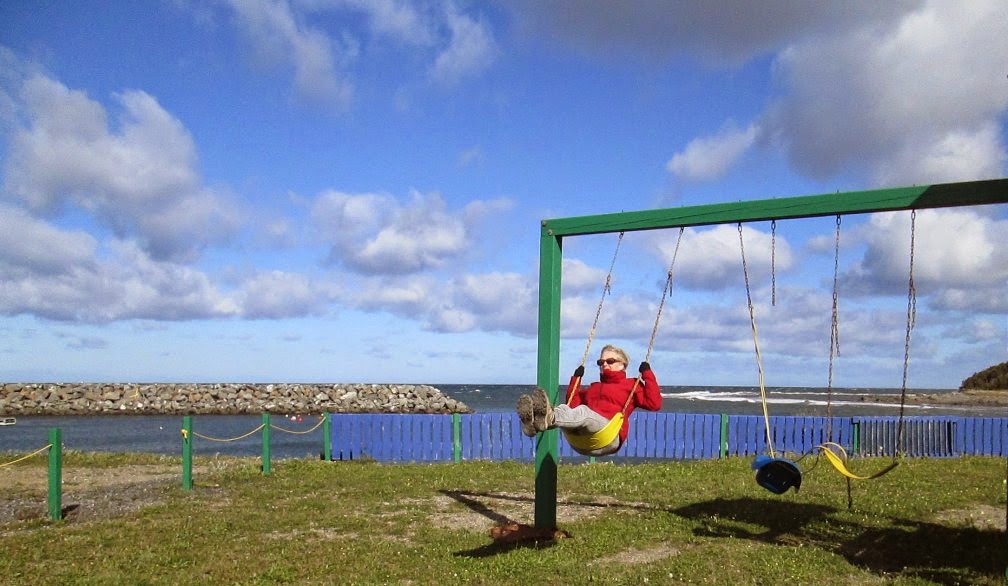 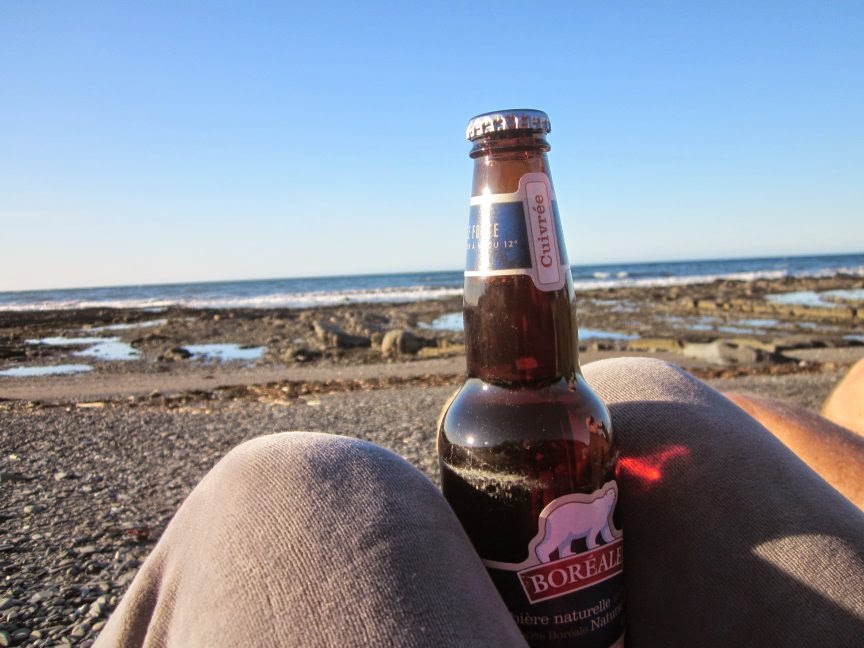