So far, halfway through the month, we've gone from -27C to 8C. (Or -16F to 46F.) It's been a mostly grey month with everything from snow to rain to ice pellets to ice rain. I wake in the morning to percussion on the window and try to hear whether it sticks or bounces.

It's the month for a lot of people when the bills from Xmas shopping come in. Bills, bills, too many bills! Why so many? Because there's a cock-eyed rationale whereby people are supposed to give crazily to make people love them. There was a commercial on TV before Xmas where a woman walked into a room with wrapped presents on a table. She smiled at her husband and said, Gee, honey, that's so sweet! This was followed by an alternate scenario where the room was heaped floor, tables and sofa with presents and the woman shrieked, Oh honey, I love you so much!!!

I don't care so much about the change from one year to the next. Flipping a number doesn't feel like a watershed moment. I hold more to personal anniversaries. That was the year we moved into the house. This happened after so-and-so died. For R's birthday we went to Mexico. Don't ask me what year or which birthday, but it was his birthday.

January took on more significance a couple of years ago because that was when I had heart surgery #2. It's been explained to me many times that heart surgery is fairly routine. The heart is an easy muscle. The least electrical shock will kick-start it again. And yet--my argument--I only have one heart. If it stops working, I'm stuck. To be who I am, I need my heart.

So there's some anxiety around the whole notion of having scalpels poke around inside it. Also the fact that the heart has to be stopped in order to operate on it. Before the surgery, I had some questions--some in jest, some earnest--as to whether I would/could be the same person once my heart was stopped and then started again. Would some essential part of me have wafted away? Silly concern, but hey, who knows? I'd hate to think that all of what's me resides in my brain. Or wherever.

But it happened. I survived. Two whole years ago as I write. Am I still the same me? Me with two mechanical valves that click audibly. No one told me before the surgery how much racket they would make. When one valve opens, the other closes. When one closes, the other opens. That might sound obvious to you, but you don't hear the double-time clicking. The sound that you associate with a human heart beating sounds deathly slow to me. I get two clicks per beat--a real cha-cha-cha rhythm. It doesn't go with my fairly quiet life.

By now, for the most part, I've gotten used to it. FOR ANYONE WHO'S HAD MITRAL AND ATRIAL VALVE REPLACEMENTS AND FINDS THEM NOISY AND WONDERS HOW LONG IT TAKES TO GET USED TO THE NOISE: I'D SAY 18 MONTHS. Which doesn't mean there won't be times when you grow conscious and it annoys you... when you're trying to fall asleep, at intimate moments, during a quiet scene in a movie.


I came through the surgery fine. Apparently there was never even a chance I might die on the table. Or such a slim one that's it not worth mentioning. The new valves were installed, my ribs were wired shut, my chest stapled close. For the first night I lay swollen from the anaesthetic and barely conscious in a fancy ICU bed while a respirator did my breathing for me. The next day I was breathing on my own and had been sat upright--which hurt, but I was determined to get out of that hospital as soon as possible. First meal of jello and instant bouillon did not tempt, but I got it down. I was the first patient among the ones who'd had surgery on the same day to be walking in the hallway. I'd already walked to the next wing before the physiotherapist came to see me and talk about the importance of getting out of bed.

The near-death experience came five days later--complications that sent me back to the ICU.

So I have two anniversaries in January--the day I got my new valves, and the day my heart raced so hard I thought it might leap from my not yet healed chest and the doctors couldn't stop the bleeding.

Given my thoughts this week, it's not surprising that when I saw this photo of the damage done during the ice storms in Ontario, I felt the wrench of the branch torn from the tree deep in my chest. The effect is all the more powerful because of the contrast--the brilliant heartwood, the dark bark, the white snow, the grey sky. ...And what's that sign about?
Photo taken by the amazing Matilda Magtree at http://matildamagtree.wordpress.com/ 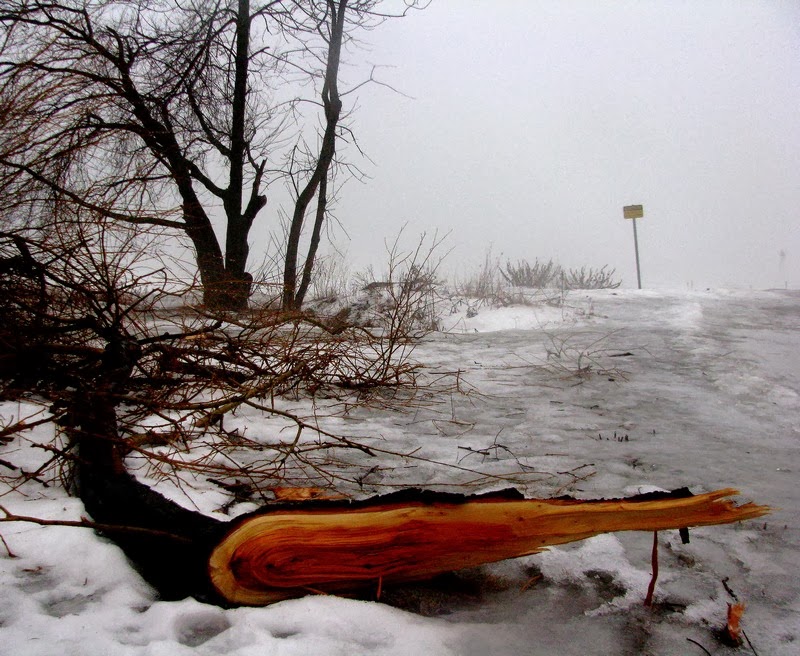 We also went to the funeral of a friend who passed away in Dec, but she had kept her good spirits up till the end of a long life, and the service was one of the most joyous and celebratory I've ever been to--an odd comment for a funeral, but so it was.