R stepped into my room the other day, saw the pages I was working on, and commented with surprise that I'd started writing poetry. 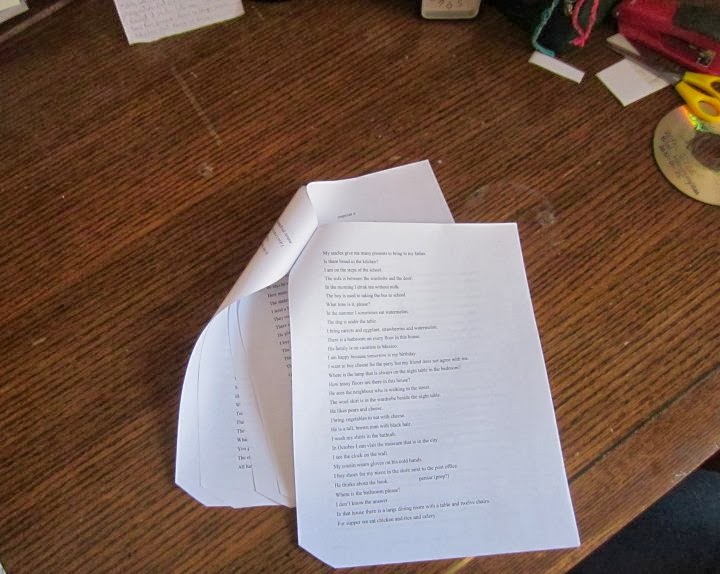 Poetry??? To write poetry one has to know about melopoeia, quatrains, sestinas, hovering accents... I have a hard enough time with accents I can see and still don't know how to pronounce. I want to fêter a birthday and have no idea whether I'm telling another friend that we're having a fête, a fète, or a féte. They're all pronounced differently, but my ear doesn't hear it. So how would I handle a hovering accent? Not to mention that a poet has to be graced with an acrobatic tongue and a wildly juxtaposing imagination that sees the world in a grain of sand.

I have a great love of language but I know my limitations. I'm not a poet.

Nah, what R saw was my attempt to amuse myself by concocting sentences to test my grasp of Spanish. By sentences I mean simple declarative statements. I've accumulated a meager heap of vocabulary--city buildings, furniture, vegetables, occupations, family relationships. (I still can't believe we spent a whole 3-hr class on nephews, uncles, grandmothers, fathers-in-law, cousins. I'm not marrying into a Spanish family; I'm just trying to speak the language.) We've learned verbs, though there are so many irregular ones--lists upon lists of them--that we haven't yet progressed into past tense. I'm fixated on prepositions: beside, above, in front, near, around, below, on top, under, behind, inside, between... I move my mug of tea to one side of my desk, then another. My pen is no longer beside the mug but behind it. I practice saying where it is. I move my mug again. This could make me a candidate for psychological testing, but seriously, I'm only trying to learn a language.

I've heard that Spanish is an easy language to learn because you sound out exactly what you see written--unlike French where I dare you to have a go at débarbouillette (which you might think is an uncommon word that nobody sane would ever need to know how to say, but I used it at least once every time I went to work for 30 yrs). So that's fine: in Spanish you write exactly what you hear, and you hear exactly how a word is written. The problem is: what do you hear? Your ear can't decipher it yet. And as for saying... even once you learn that j's are pronounced like h's and v's are pronounced like b's, your mouth isn't accustomed to making those sounds when you see those letters. I'm not even going to mention the torture of r's and double rr's. Learning Spanish demands a new relationship with your tongue.

However, I'm game because one day I want to go to a Spanish-speaking country again and I'd like to have a go at communicating. It's boring to memorize words and lists of verbs, so I'm trying to write sentences that practice what I know how to say. I can't help if what I know how to say in Spanish doesn't make much of a story yet.
Posted by Alice at 10:35 PM

Email ThisBlogThis!Share to TwitterShare to FacebookShare to Pinterest
Labels: spanish