where do the horses sleep at night?

If you live in Montreal, or if you've visited Old Montreal, then you've seen the horse and buggies--or calèches--that are available for hire. 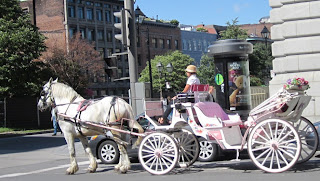 Here's one with velveteen upholstery, room for four--maybe six if you don't mind sitting tight--plastic flowers along the back of the buggy. The drivers double as tour guides. They can tell you the names of notable buildings and a bit about their history. A half-hour trip costs $48 and one hour $80. I asked this woman who was waiting at the back of the line in front of the basilica. 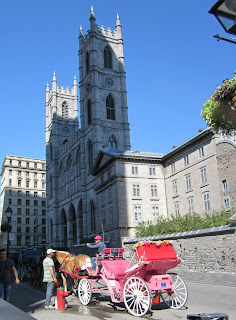 She had a few words to say to everyone.

I don't often go to Old Montreal, but I think of calèches fairly often because the neighbourhood where I live--Pointe St-Charles--is where some of the horses sleep at night. Toward the end of the day, if I'm walking along Wellington, I can hear a horse clopping along, the plastic flowers still stiff and sprightly, the driver and the horse fatigued.

Last week I saw a buggy with a passenger heading away from Old Montreal en route to the Pointe. A woman with bags of groceries on the floor of the buggy. She and the driver weren't talking, not even pretending. I guessed they were a couple who'd been with each other as long as the horse had been with them. Man and horse had picked her up at the grocery store on their way home.

Most of the horses sleep on the other side of the Lachine Canal in Griffintown. If you're driving across the canal on the des Seigneurs Bridge, depending on the heat of the day and the direction of the wind, you'll smell the horse piss. Hidden by the trees, there's a crumbling block of falling-down stables. 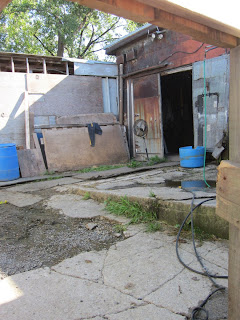 When I was in Old Montreal looking at the calèches, I saw this woman currying her horse with a soft brush, talking in his ear. What are the chances that she has a grassy backyard and feeds him carrots at night? 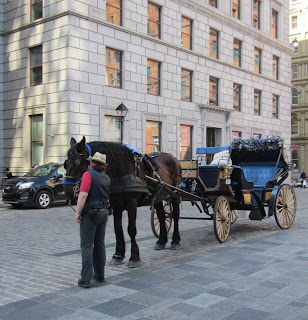