new german fairy tales / but grimms not forsaken yet

This is very exciting for someone like myself who loves the fantastic fatalism of old-time fairy tales. A manuscript of German stories, collected by Franz Xaver von Schönwerth (1810-1886), have been found in an archive in Regensburg, Germany where they were locked away. What a fitting plight for fairy tales--locked away then discovered. All we're missing is the wooden barrel or treasure chest.

In fact, the stories were discovered a few years ago but they are only now being translated into English which is why it's made news in The Guardian.
http://www.theguardian.com/books/2012/mar/05/five-hundred-fairytales-discovered-germany

I have ordered a copy of a selection of the stories published in German by Erika Eichenseer in 2011. I'm wondering... am I allowed to translate a couple of these stories and post them here--since I'm not being paid? Will I get slapped with a copyright charge? Anyone know how this works?

I'm not sure I like how the article in The Guardian, quoting Eichenseer, compares these new stories to Grimms' fairy tales as if the latter are stuffy with "literary gloss". There are many, many versions of Grimms'. The copy I have, published in 1957, sounds very folksy to me with its dialogue in dialect and nonsense rhymes. Apparently the newly discovered stories are more charming and rough and authentic. (Interesting concept, authentic.) Well, I can't wait to read them to see.

I will note that the particular story of a maiden who escapes a witch by turning into a pond, which Eichenseer states does not appear anywhere else in European fairy tales, does indeed have a parallel in Grimms'. I'm referring to the Grimms' story "Fundevogel".

Two children who are inseparable are trying to escape a mean-minded cook, who wants to boil one of them for her supper. She sends three servants into the woods to find the children who have run away. When the children see they're being chased, one turns into a rosebush, the other the rose on it. The servants return to the house and tell the cook they couldn't find the children, only a rosebush with a rose on it. The cook screams that they should have torn the bush in two and brought the rose home. She sends them off again and as the children see them coming, they once again swear eternal loyalty to each other. One turns into a church and the other the crown inside it. Again the servants return home and again the cook screams at them. They should have broken down the church and fetched home the crown. Convinced of their utter stupidity, the cook sets off after the children herself. One child becomes a pond, the other a duck swimming on it. When the cook sees the pond, she bends down to drink it but the duck swims across the pond to snatch the cook by the nose and pull her in where she drowns. 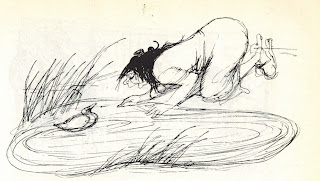 I have not yet read the Schönwerth stories, but it seems to me the developments in this story bear some similarity to the one used as a unique example in The Guardian. I am not about to toss my Grimms' aside.
Posted by Alice at 1:03 PM