jazzing up an old recipe

You know you're dealing with something old when even the modern innovation has to be manipulated by hand. We no longer beat clothes on a rock by the river; we toss them in a front-loading washing machine. Instead of hitching a horse to a wagon, and loading blankets and food to get to the next settlement, we spend a few hours in a bus or train or car. There have been significant advances in time needed and energy expended.

In the case of this recipe for spätzle, the new-style hobel you need to make them isn't all that much different from the one my grandmother used. And who knows how old that was? It might have come with the house, which was built in 1673. 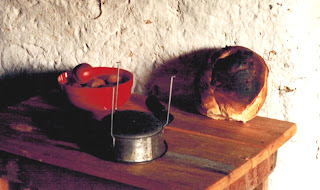 The metal bowl has holes in the bottom--can you make them out? It stands upright with its legs in a pot of boiling water. Dough gets pushed through the holes to drip button-sized noodles into the water. In Switzerland, these are called knöpfle or little buttons. In Austria and Hungary these are called spätzle, which I'm going to guess means little sparrows. A sparrow is a spatz. (You form the diminutive in German by adding an umlaut and a cute suffix. People who don't speak German think umlauts are cool. There are any number of English or French designer labels peppered with what someone thought looked edgy. "Hey, let's add an umlaut!" Sometimes an umlaut only makes a word sound kittenish. Huh.)

As far as I can recall, I never had spätzle as a child. I first tasted them in the Hungarian restaurants along Bloor St., east of Bathurst in Toronto, when I was a student in the late 70s. Cheapest meals in town--schnitzel and spätzle.

Years later, one of my aunts in Austria showed me how to make them with a modern hobel, which looks like this: 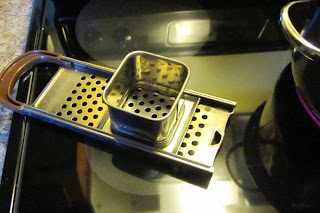 The dough is poured into the metal square that you slide back and forth. 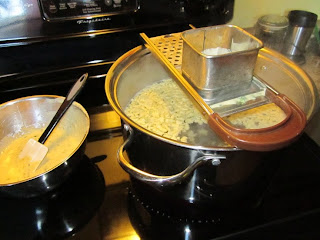 The dumpling or noodles take only a couple of minutes to cook. I scoop them onto a baking sheet so they don't clump together. 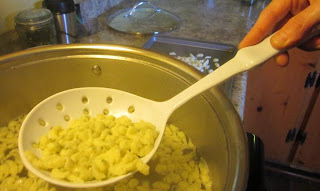 The next step is to cover them with cheese or fried onion or sour cream or whatever occurs to you.
I like this amazing recipe R found on Epicurious. (He's always trying to get me to cook Austrian dishes and make clothes out of curtains.)
http://www.epicurious.com/recipes/food/views/Herbed-Spaetzle-in-Brown-Butter-360734
The batter has lots of chopped sage, oregano and thyme. Once cooked, the spätzle are stirred into browned butter with arugula and radicchio, and garnished with lemon. 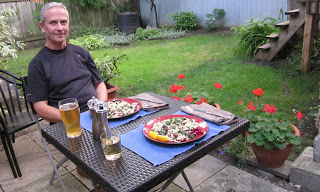 R is not complaining.