coconut milk ice cubes, tampons, and where is that hole? 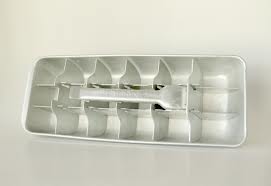 A few of us were sitting in the corner nook of a pub on Sherbrooke, celebrating a birthday. Birthday Lady was smiling and talking about ageing. Rings on her fingers, delicate silver bracelets on her arms, birthday cards and glasses of beer on the table.
Coconut milk ice cubes, she said. Organic, she specified.
For some women, menopause means hot flashes as violent as a desert storm, night sweats that have them yanking the bed sheets off at 3 am, memory loss, mood swings, decreased sex drive, sleeplessness, impatience, nervousness.
For all, it means hormones petering out, taking lubrication with them. If you want to continue to have sex (which not all women do--see decreased sex drive), you have to supply the lube. There are products at the pharmacy; products at sex shops. Naturopaths offer herbs and tinctures with plant estrogen. I've heard that motherwort works wonders. I can't use it myself because it interferes with other meds I have to take. Soy milk might help. Almond oil is an option, assuming you're not allergic to nuts. (You don't want to end up with a swollen flower.) Vitamin E comes in capsules you can insert, though it makes you smell like breakfast cereal.
I'd never heard of coconut milk.
She said, I freeze it in ice cube trays. She held out a finger. Pop one in.
Well, that gave me an image!
I didn't know about mini ice cube trays, which you can buy at the dollar store.

A few days later I was telling a friend, also in her 50s, about coconut milk ice cubes.
She, in good storyteller fashion, countered with a tampon story.
I like bumbling tampon adventures because they make me feel like I wasn't the only naive teenager in the Western hemisphere. There were girls at my school who talked like know-it-alls about curling irons, electric toothbrush handles, carrots and zucchini--and even if now, in retrospect, I can imagine they made everything up, they had to know to say it, right?
I didn't. I hadn't yet figured out the how, what and where of my own body. I'd been shown a diagram of a uterus, which was no more helpful than a table  full of ingredients to someone who doesn't know how to bake a cake. All I knew was that there was a thing called a tampon which allowed other girls to come to gym class without a diaper-sized Kotex (the only size available in the early 70s) stuffed in their underpants. And am I misremembering this, or did we really have to wear one-piece bloomers with elasticized legs?
Okay, I just googled gym uniforms and found one. Can you believe this? We had to wear these, buttoned up, shoulders covered, any glimpse of underwear hidden. 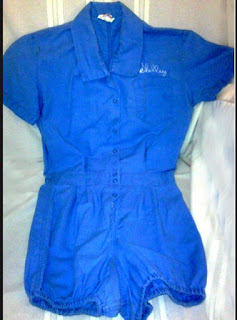 Even worse, ours were yellow--so the black girdle my mother gave me to keep my Kotex in place was visible from across the basketball court.
The gym teacher sneered. The other girls sneered. The only solution I could think of was to get hold of these magical devices called tampons.
I begged my mother to buy some, though I didn't have a clue how to use them. My mother demonstrated shoving them up. Shoving them where? I spent a miserable, painful, frustrating hour in the bathroom with the door locked and my mother hectoring from the hallway. I kept the bathroom door locked and didn't successfully figure out how to wear a tampon until after the first time I had sex. That's right. A boy had to show me.
Back to my friend's tampon story... She'd gone to a pool party but wouldn't go in the pool because she was having her period. You know how things get handed around at parties? Her friend gave her a tampon. She had no idea what a tampon was, nor what to do with it. She took it to the bathroom in a state of great puzzlement, finally pulled it apart and stared at the mess of cottony white fluff. Decided to line her bikini bottoms with it. Thank the fates she has no recollection of what happened afterwards. Amnesia can be a mercy.
She did later buy a box of tampons and read the instructions. Insert? How? And where? Unbelievable.
This brings me to a story I've heard several times from men. They recall how, during adolescence, they had a vague longing or instinct (I'm talking about hetero boys here) to push their willies somewhere in a girl's body. But where? Think about it. Why would a boy, who had never seen an anatomical diagram, assume that girls weren't joined at the top of their legs the way they were? There was talk of a hole but where was that hole supposed to be? The belly button? At least one man told me he believed belly buttons made perfect sense because babies grew under belly buttons. Was the hole where girls peed big enough? Another possible hole was the rectum but that didn't sound an attractive prospect. He and his friends puzzled endlessly about this mysterious hole. They were too young to have had their own experiences, and older brothers, who might have told them, were jokers who only added to their mystification.
The same man tells me that when he first understood about girls having periods, he couldn't understand why girls stuffed napkins between their legs. Couldn't they control themselves and hold it in until they went to the toilet?

A few days ago, when I told the Birthday Lady how her organic coconut milk ice cubes segued into a conversation about how a boy wondered why girls didn't keep their periods in until they went to the toilet, she said, Maybe that explains the age-old bafflement between men and women. At a deep-down subconscious level men expect women to control that particular mess for which, however, there is no voluntary muscle.