Go ask Alice.
Depending on how old you are, you'll know that the next line is, I think she'll know.
https://www.youtube.com/watch?v=c2yQLXTuctA
I love the song for the many references to Alice in Wonderland, my patron saint in all matters practical and metaphorical. Remember, I grew up steeped in Grimms' fairy tales. I sometimes wonder which side of the looking glass I'm on. Of course, I knew this was a drug song, but I didn't do drugs. I knew that the Dormouse didn't say, "Feed your head." The Dormouse said, "Did you ever see such a thing as a drawing of a muchness?" Or, "You might just as well say... that 'I breathe when I sleep' is the same thing as 'I sleep when I breathe'!" When you ponder logic like this, you don't need to do drugs. But I'm not writing about hallucinatory aids, Jefferson Airplane, or Alice in Wonderland (though work often felt like that). I'm saying goodbye to my job.

For many years I've been the Go Ask Alice person on a surgical floor in a hospital. Should I say which? Does it matter? L’Hôpital Général Juif aka The Jewish in Montreal. Before that, I did the same kind of work when I was a student in Toronto. It's a clerical/coordinator position. I'm the sitting duck at the helm of the nursing station. You're a new patient. You come to me. You're a family member or friend. You come to me. You're a nurse who wants to know what tests the patient needs before surgery. You're a doctor who wants to know if the tests have been done. You're a nurse who wants the doctor to be paged. You're a doctor who wants to tell the nurse what to do. Go Ask Alice. I filter, redirect, coordinate, file. Over the years, the job title has changed several times. It still boils down to Go Ask Alice. Sometimes I know the answer. If I don't, there's a good chance I know who does and how to reach that person. (So you should be polite to be. Amazing how many people don't understand that little trick.) Mind you, it's true, it's a hospital--and sometimes there are no answers to the questions people ask. Or too many questions get asked all at once. Some people think their question is the most important.  The atmosphere can be strained and hectic. You've seen TV shows set in hospitals? I don't mean afternoon soaps, but episodes of ER or Grey's Anatomy. Where I work is often just like that--except that in real life doctors don't wheel patients to their x-rays or spend anywhere near as much time at the bedside. In real life support staff do the labour and doctors waft through like divas with only moments to spare. (This is not a gripe about doctors, but about the portrayal of patient care on TV shows. Even doctors agree that once they've done their surgical intervention, they depend on nurses and orderlies to monitor patients. That's, say, two hours of scalpel and stitch time versus two weeks of checking epidural pumps, inserting IVs, sliding bedpans, drawing blood, walking patients...)

My rationale, when I took the Go Ask Alice job, was that I wanted to keep my time and energy free for writing. Most of the people I knew, who wanted to write, were working as teachers, translators, librarians, editors--work more in line with their interests and status as writers. A Go Ask Alice job was in no way intellectually challenging. I could do more. Once upon a time, I'd studied Goethe, Chaucer, Donne, Zola. But I still can't understand how people perform at real jobs and write. I'm too slow. I need a pool of quiet around me. I like lots of time.

I decided that playing Alice would allow me time to write. The work paid just well enough that I could do it part-time. Admittedly, there was a certain sameness of routine that sometimes had me biting my cheeks. I was asked the same questions day after day, week after week, year upon year. But mostly the pace was so busy that I hardly noticed the work. The environment is interesting in a way that typing in a cubicle or serving drinks in a bar isn't. I love the language--deconstructing all those Latinate words. Cholecystitis. Oopherectomy. Pneumothorax. Subglottal. Blebectomy. (Any guesses what that operation is?)

And so it's gone on for more years than I care to remember. Wonder of wonders, I seem to have stayed there long enough that I get a subsistence level pension--subsistence because I only ever worked part-time and I'm leaving well before the usual age for retirement.

Will I miss the work? No.

Will I miss the environment? A little. Being the Go Ask Alice person obliged me to act more "normally" than I might have otherwise. I had responsibilities. I had to behave. (So to speak.) There was always something happening.

Note that I could have done without the varieties and textures of body fluids in the specimen basket, which was at eye level for me, sitting at the desk.

Will I miss the people I worked with? Definitely. I'm a solitary, bookish kind of person who likes to sit alone in a room, with a closed door, make things up and tell stories. Working at the hospital taught me about belonging to a team, which I certainly never learned growing up or during my years at school, when I was always the last to be picked for any kind of team, except for spelling. The nurses and support staff in the department where I worked are good people in a way that solipsistic, writerly types like myself often aren't. (Or should I say that we empathize better in our imagination and on the page than in real life?) I'm not saying that working in a hospital morphed me into a kindly soul who helps elderly women lug their groceries across a busy city street, but I learned some important life lessons working on 4NW, for which I am grateful.

The best part about my job was hearing the stories of the people I worked with--all stripes, ethnicities, hair styles, accents. Is there any culture or country that isn't represented in an urban hospital? I heard about Vietnam, Eritrea, Lebanon, Brazil, Haiti, Egypt, the Barbados, China, Brazil, Romania, the Congo, Mexico, France, Argentina, Jamaica... (I'm not listing Quebec, because I live in Quebec, voyons donc!) I was shown saris. Given Pakistani burfi (made in Pakistan) to taste. Filipino pan de coco. Hamantaschen at Purim. We discussed Bajan versus Trini slang. Female circumcision. I will very much miss rubbing elbows with such a rich cross-section of the population. What a meld of habits and personalities.

Last Saturday my friends at work had an amazing surprise supper for me, which I nearly ruined because I  refused when the waiter tried to move myself and R from the table where we were already nicely ensconced, drinking our wine. R, too, was acting like a crazy man, waffling about what he would like to eat, because he was trying to play his part in the surprise. I only finally followed the waiter because he grabbed my glass of wine and headed up the stairs.

I didn't think I would ever say I enjoyed being the focus of a surprise party--but in this case I did! I'd worked so closely with these people--closer in the hands-on, tight-spaces hospital setting than I've ever been with my own family. Everyone was smiling so broadly, knowing me well enough to wonder if I was going to turn and bolt. (Was that why Keith grabbed me in a firm hug?) And what a lovely Alice gift! A pen made in Florence. Perfect reddish blond--the colour I like to believe my hair was years ago before half of it turned white. How does the ink flow so smoothly? I hope the words keep coming. And yes, I write first draft longhand. 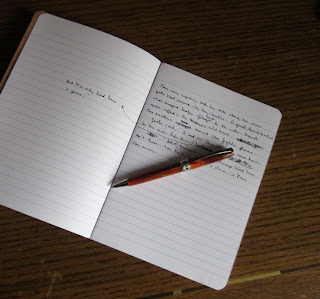 Thank you--for so much!

p.s. I meant to add that I always wanted to wear Grace Slick's fringed Woodstock tunic to work, but the time never seemed right.
Posted by Alice at 11:50 AM