The note below was written May 11, four months after surgery, when I was still bothered by the noise of my new heart valves clicking. If you're reading this because you wonder if you're the only one who feels frustrated and aggravated by the noise of mechanical valves, then go ahead. Keep reading.
But know this too: I'm writing today, June 19, five months plus a week since surgery. I'm not sure what happens physiologically, inside the body, as it heals after surgery. Does new tissue grow, fill up and muffle the noise? Do the organs resettle and cozy up to each other? Do the valves get used to their new home and clack less aggressively?
The clicking is quieter. My husband confirms it. I still hear it when I'm in a room alone with no ambient sound, but it's duller. At night, I no longer feel my heart thumping against the mattress when I lie on my side. I have not just grown accustomed to the clicking. It is less obtrusive.
There is hope.

But here's where I was five weeks ago...
Before I had cardiac surgery, I wrote a post on Skumin's Syndrome, a non-psychotic mental disorder that  afflicts a percentage of people with artificial valves. These people are anxious, they don't believe their valves work, they lose sleep, they become depressed. I've since been told that Skumin's Syndrome is not recognized by North American or Western European medicine. The Russian, Victor Skumin, who named the syndrome, didn't have a large enough control group to convince Houston, Oxford, Paris, Frankfurt. Only enough clout to get Russians to believe him.

Yet curiosity about the syndrome exists because I get a lot of hits on the site. It makes sense to me that people with these new alien objects in the place where, historically, the soul is supposed to reside, should feel anxious. Even people who don't believe in souls know that their bodies depend on the proper functioning of this muscle pumping in their chest. Someone diddled with it. Someone used a knife. Did that someone put everything back in the right place?
I don't feel that fear. Whatever was cut has by now healed. I'm not afraid of my new valves. I exercise and get them clacking. I don't lie awake worried that they'll stop. I'm not depressed that I have a repaired heart instead of a whole heart.

However. I am aggravated by the incessant clicking of the valves and that keeps me awake. I knew they would click, but before the surgery I didn't fully appreciate what it would feel like to live with the clicking. They click like a grandfather clock inside the cabinet of my ribs. They click like slow-speed castanets on incessant repeat. It's not an organic, skin or flesh sound. It's inside my chest. It never stops.
I try to sleep. The valves click. I wake in the night. They're clicking. I'm in a quiet room where I want to be silent and alone with the door closed, so I can think about writing. The valves click like a stopwatch to harass me.
The surgeon said I should listen to music. Excuse me? I've never listened to music while writing. I listen to music because it's music. I don't do background music.
Of course, I'm fortunate that the valves click because it means I'm alive. The day they stop clicking, I won't be around to hear it. I understand, I understand, I UNDERSTAND.
But damn, do they click. Since there are two valves, I get two clicks per heartbeat. The pace is not relaxing.
A few weeks ago I went to a talk on the North. One of the panelists, Kathleen Winter, who has twice now travelled to the Arctic, spoke of the utter silence of the tundra. Louis Hamelin, also an author who has spent time in the North, spoke of the silence. Ha, I thought. If I stood in any of these places of sacred silence, I would hear my valves clicking.
How loud is the clicking? I hear it now. At night R, who is reading in bed, can hear the clicking. You can extrapolate from that and imagine other times when we're closeup and the soundtrack is ta-tick, ta-tick, ta-tick, ta-tick, ta-tick.
Ambient sound is supposed to help. We have a decades-old ceiling fan in the bedroom that roars and drowns out the valves--while blowing cold air. I end up having to burrow so deeply under the blankets that I can hear the clicking inside the cave of blankets.
I tried a few recordings of rivers on pebbles and waves on sand, but they mostly sounded like a chorus of broken toilets.
I bought a sound conditioner which consumer reports claimed was one of the best on the market--a Marpac. People raved about the ocean surf. I can only assume that these people have never been to the ocean. At low volume, the machine drones like traffic on a busy highway, heard from an apartment window. At high volume, you feel like you're on the same highway, riding on a tailgate. The pitch control  makes the drone more or less shrill.
There's a Youtube clip demonstrating the use of this machine. A man in bed is being harassed by the noise of gunshots. What kind of marketing strategy is this? Gunshots??? What's the correct response to a situation like this? You're in bed, you hear gunshots. Maybe you should call the police. The man in the video clip turns on his Marpac Sound Conditioner, sighs with contentment, and falls asleep.
I wasn't able to drown out the sparrows outside my window, much less anything as loud as gunshots. Or rather: for the machine to be loud enough, I for sure couldn't sleep.
Another sound option I tried was a CD called Heartbeat River, specifically designed for people with mechanical valves. It claims to be a psycho-acoustic recording that will distract the listener from the sound of her own valve--by including random valve sounds with the river sounds. Interesting concept but it didn't work for me. In fact, it began to make me anxious to hear all these un-syncopated valve sounds. I had to keep putting my hand on my chest to make sure my heart wasn't beating like that. The recording lasts for about half an hour. I haven't managed past five minutes without having to turn it off as quickly as possible.
I did find one CD which actually sounds like ocean surf--probably because the quality of the recording is superior. I can play it loudly enough to mask the clicking and still write and read. I'm experimenting with wearing an ear bud at night to help me fall asleep. The CD is called Ocean Surf, Timeless and Sublime, part of Dan Gibson's Solitude series.   www.solitudes.com 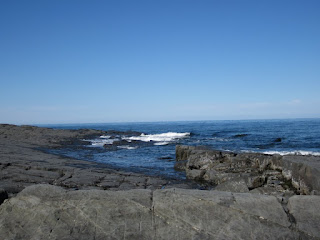