a loom of my own 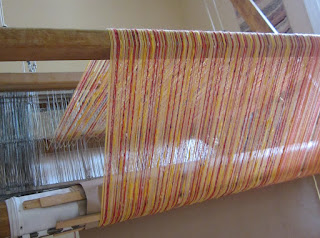 I couldn't sleep this morning, so got up and finished dressing the loom. I used to call that stringing it, but a weaver told me it's called dressing.
I'm an ad hoc amateur with more love of textiles than know-how. Years ago I took a couple of workshops at a community hall to learn the basics. I got myself a small table loom and later this 36" loom which a friend of a friend of a friend had in pieces in her basement. R did the honours of figuring out how to put it together. (Merci, mon cher!)
The action of weaving is relaxing... sending the shuttle back and forth, feet moving from treadle to treadle. It's fun to watch the zillions of individual threads coming at you interlock and become cloth. Yeah... that part is fun.
Getting the loom ready is labour intensive and hard on the back. Lots of leaning in weird postures, climbing under the loom to tie up the treadles, stooping over the reed. I didn't consider a weaving project in the immediate months after surgery. It would have been too hard. About a month ago I poked through my bin of leftover spools to see if there were colours I could mix to make a length of cloth. Since I only get to the loom every so many days, it takes weeks to get a project ready. I forgot to take a picture of preparing the warp, which is that mass of threads presently on the loom. There's a method to keep the 380 threads, 5 feet long, in order. There has to be a method to keep them in order or you'd end up with a complete tangle of knots. 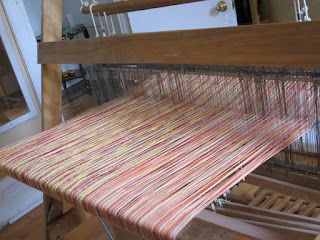 Each thread gets pulled with a hook through the eye of a heddle. The heddles aren't all in a row but on four separate frames. Depending on the pattern of the weaving, one takes a heddle from the first, the second, the third, or the fourth frame. You get the idea. There are looms with six, eight, even twelve frames. It sounds orderly, but when you're doing it, the skinny heddles look like a field of wiry weeds. The threads coming at you look like a field too, only this field is coloured.
Here's where I ended up this morning: 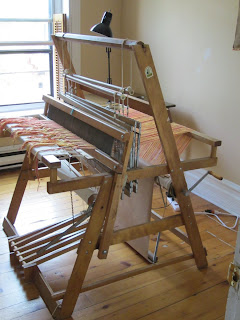 For anyone who weaves, yes, I have absurdly long tails out front. Because... oh, I had a problem and had to pull the yarn forward. I also forgot to put lease sticks at the back which will give me all kinds of grief with tension.
But I look forward to weaving--and now I'm ready to start.
I've always thought a loom a handsome piece of furniture, especially when it's dressed. But it's awkward and large and, like me, needs a room of its own. 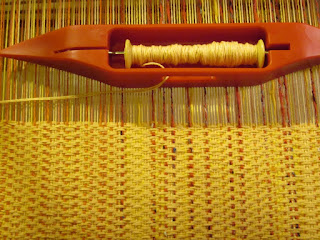 Email ThisBlogThis!Share to TwitterShare to FacebookShare to Pinterest
Labels: weaving