my chest is hot stuff

We drove across the empty city at 3:30 AM during curfew. The only other car we saw ran all the red lights. I held a barf bag. My head wobbled like it was filled with water. I was only sitting upright because I was strapped in. If I lay down the ceiling swirled and swerved. Forget trying to walk. Walls at a tilt, me at a tilt. I'd stopped vomiting because there was nothing left to vomit. My body still retched. My cardiac pills? They didn't even get far enough down the gullet to dissolve. I heard them ping in the bucket. There were closer hospitals but I'm attached to the one I know. The mind grabs at familiarity when everything else goes strange. 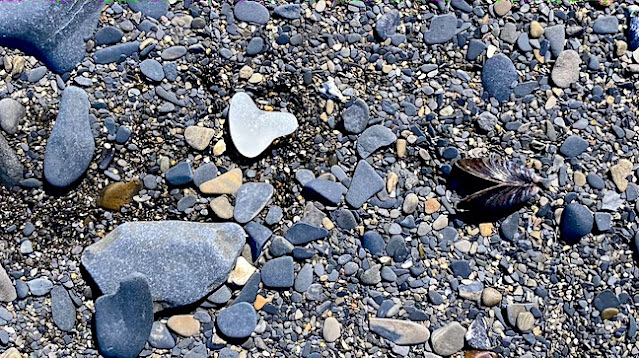 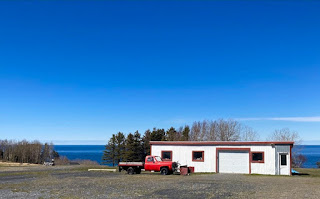 I lay on the stretcher, trying to figure out why someone had used pink waterproof tape on a metal-framed, sliding glass door. Once upon a time, during the life where I worked in a hospital (this same hospital), I ordered medical supplies. Whenever a patient had a chest drainage tube, the staff wanted pink tape. No doubt there are other uses for pink tape, but that's why we stocked it in the department where I worked. 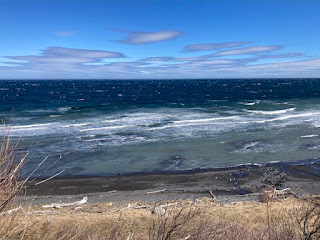 Through the blinds on the sliding door, I could see my nurse at a computer, another preparing an injection, doctors talking, Housekeeping wiping surfaces with disinfectant. The medication I'd been given to stop the retching made me sleep. I woke now and again, realizing I'd been snoring behind my mask. There wasn't much for me to do except wonder about the pink tape decorating the door. 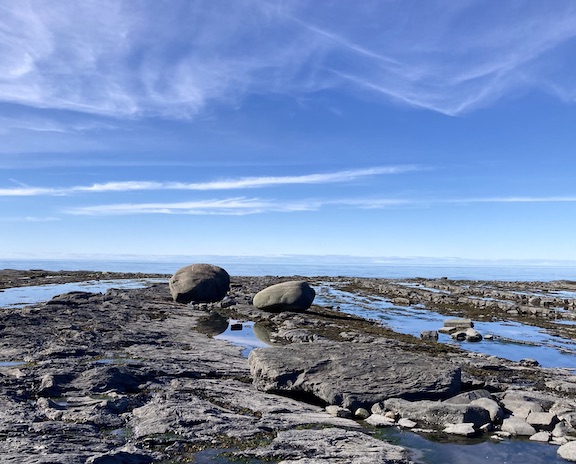 I was in isolation, so the nurse and doctors didn't come into the room more frequently than they had to. Each visit required a fresh isolation gown, mask, face shield, gloves. On and then off again. My only company was the monitor that pinged when my heart raced, which was always since I hadn't yet been able to take the medication to control it. I was given an IV version but it was short acting. I needed my fat, blue 300 mg pill of Diltiazem.
One doctor, looking at the monitor, said, Can't you feel that? Of course, I said. Another doctor wanted to listen to my chest but might never have heard two mechanical valves clacking at arrhythmic high speed, because she pulled away the head of the stethoscope as if it had been scalded. That's right. My chest is hot stuff.

But I wasn't there to get my heart fixed. In 10 days time I was already booked for a cardiac procedure--an ablation. 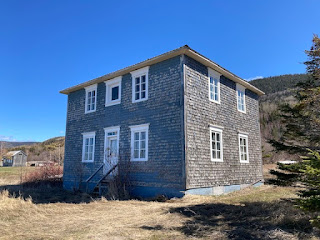 I have a history of episodes that include paralysis, blindness, inability to speak, unresponsive limbs. Over the years, after many tests and different neurologists, and though I don't always get a headache, it's been decided that these episodes are migraines. One neurologist suggested I read Oliver Sacks' book, Migraine. Sacks was interested in the atypical migraine that includes a gamut of symptoms and can be triggered by something as innocuous as the visual discrepancy of buttons incorrectly buttoned.

The neurologist who recommended I read the book give me a list of common triggers: red wine, cigarette smoke, perfume, fresh pineapple, onion, garlic, pork, windy days, barometric pressure, strong light, estrogen. Caffeine plays a funny role. It can either prompt a migraine or help relieve it. You have to figure out for yourself what your triggers are. It's rarely a single culprit but a combination of variables. 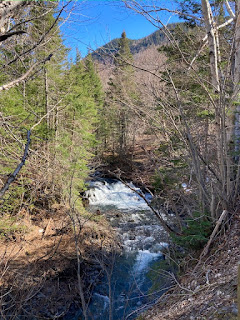 Barometric pressure affects me but there isn't much I can do to control that--except for holing up and staying home, I guess, but up until now I haven't wanted to forgo my daily walks. As for other triggers, my dietary and olfactory intolerances sometimes make life feel like an absurd obstacle course. An outsider might think, so what, she gets a headache? What a fusspot. But that's the point: I don't only get a headache. I might not even get a headache. I can be walking down the street and my leg goes numb or I lose my eyesight. One time when I lost my eyesight, it didn't return completely. I am now 1/4 blind. One time when the words blurred and I couldn't read or speak, it took me months to be able to wrap my head around formulating a sentence again.

However, incorrectly buttoned buttons do not affect me. 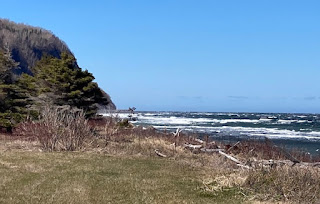 Or... I don't know. Maybe they were looking for something else. 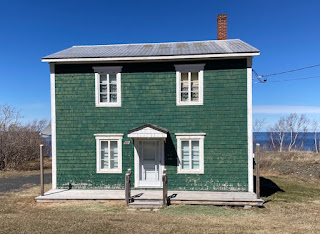 Once I could keep down my meds and my heart was no longer racketing about at 150 beats per minute, I was told I could go. Nobody has found an effective way to prevent my migraines yet, and nobody was going to try now, in the ER, with people far more critically ill. My balance was still rocky but I said I would contact my neurologist. I wanted to go. I thanked everyone for their care and help. Staff were kind and professional. I was grateful I had been admitted and treated so quickly during these strange times. Thank you, Jewish General! 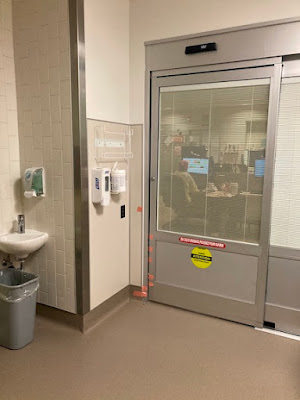 Before leaving, I asked the nurse why there was pink tape on the door. She said a patient had torn the glass and metal door from its frame. The staff had used pink tape to keep the door upright until Maintenance came to fix it. The tape from higher up had been removed, but nobody had gotten to the bottom yet. She frowned and stooped to pull a strip away but it was stuck firm and hardly a priority.

I asked the doctor whether I could go to our house by the sea to recuperate. It would be a respite between the brutal vomiting, the unexpected night in the hospital, and the scheduled procedure. I described sitting by the fire. I told her about the sea. She agreed I should relax. As long as my nausea didn't return and I could tolerate my meds, she said I could go. 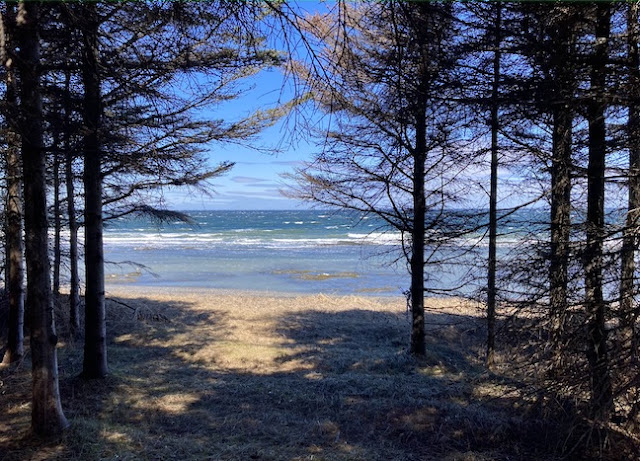 We are here in quarantine, of course. We brought all our food. I haven't fully recovered my equilibrium yet, but I've been walking a little farther every day. My straight lines are getting straighter and I only veer now and then. I can't do that neurological test of walking heel to toe without tipping, but I'm not sure I ever could. Yesterday R found me a driftwood cane the tide washed in. It helps with keeping me stable. 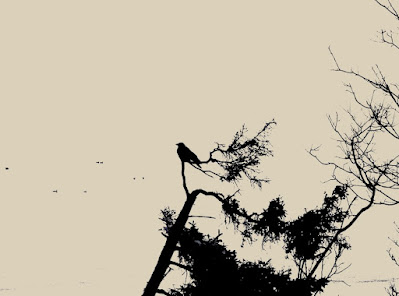 There's a fire in the stove and a horizon of water out the windows. Crows sit in the tops of the spruce trees that grow along the cliff edge between our house and the sea. If that sounds too idyllic, there's a road between us and the cliff edge. Cars, transport and logging trucks zoom by. In old-fashioned Maritime style, the house was built close to the road because that meant less snow to shovel to get to the house in the winter. When the house was built in the 1950s, cars didn't use to drive at such a clip. 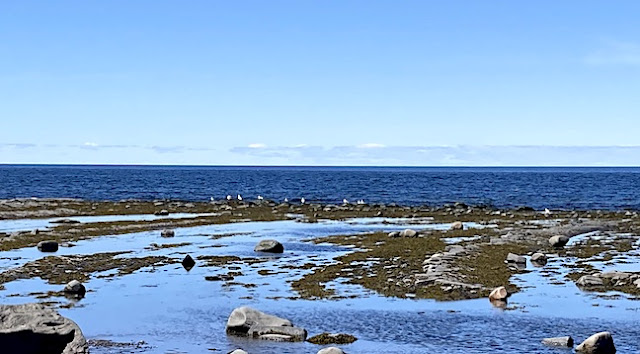 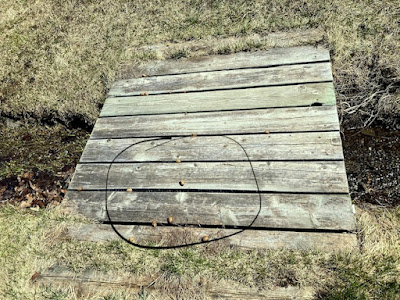 Gulls wheel and plane over the water. Moose cross behind the house at night. We haven't seen them, but we see their poop on the bridge the neighbour built. I'm surprised they use the bridge, then I wonder why I'm surprised. Easiest way to cross the gully. 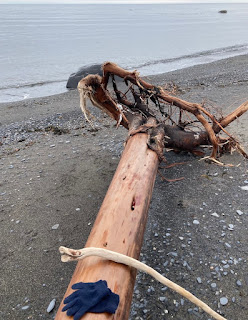 Yesterday whitecaps bobbed and crested as far out as I could see. At high tide, green, silt-heavy waves rolled in.

Today the wind has dropped. R saw a whale this morning. Last night was cold and clear, and we hoped for Northern Lights swaying along the horizon over the water as they sometimes do, but I was too tired. I missed them. When I woke, the sun had already turn the sky coral and apricot. The water was slate indigo.

Uneven ground is hard for me to walk on, so we don't go into the woods but up an old logging road that follows a stream rushing and foaming with snowmelt from the hills. We walk on the shore where it's flat. No rock clambering for me this time. Next time. 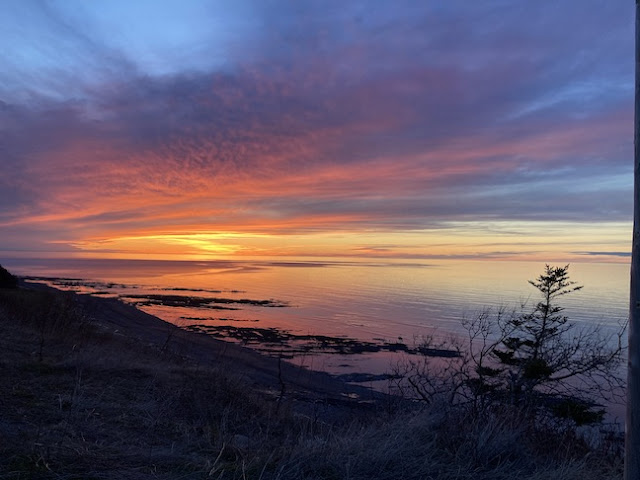 ps I wrote the above a week ago. I'm back in Montreal now. Up until yesterday, I was still using my sea driftwood cane. Dogs were giving me sidelong looks, probably unable to fathom why I didn't know I was supposed to throw the stick, not walk with it.