in dumpling we trust 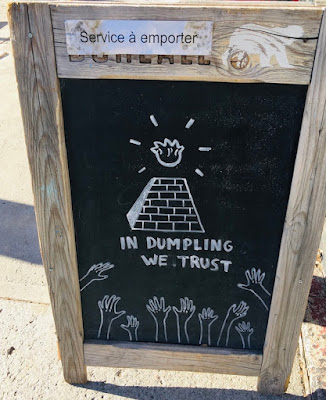 A dim sum diner, I know, but the sign makes me think of dumplings I've had in Austria, that comforting staple you can make with bread, potatoes, herbs, browned onion, smoked bacon, even plums and apricots. If it's round and it comes on a plate, it is probably a dumpling.

You make bread dumplings by ripping old bread into little pieces. If the bread isn't old enough, let the pieces dry out. They have to soak up eggs, milk, a bit of oil to make a dough. Add parsley, nutmeg, whatever chopped herbs you have on hand. You shape balls about the size of a small orange. My Tirolean aunt shapes the whole mass into a single ball that she wraps in a tea towel, boils, and serves in slices. It's called a Tea Towel Dumpling. Serviettenknödel. Some dumplings have fillings. The German word for dumpling is Knödel, though different regions have their own pronunciations and pet names. Ditto across borders in Slovenia, Hungary, Slovakia, Czechia, Poland, and maybe even wider afield.

Did I ever tell you what happened when I wrote a short story about plum dumplings? I had a character, an old Austrian grandmother who still believed the anti-Semitic propaganda she'd learned as a young woman. I modelled her on my oma whom I only met a few times, but each was memorable. The best was probably in her late 80s when I introduced R. She didn't trust anyone who wasn't Austrian but I had been born and grown up in Canada, and presumably I hadn't been able to find an Austrian to hook up with. She stumped across to him, hand raised to measure the span of his forehead, which he gamely withstood. Her verdict? Gut! Have children with him. Another time she asked me with some disdain if I had ever met a Jew. I told her that I worked in a hospital that served the Jewish community. I had once had a boyfriend who was Jewish. I had friends who were Jewish. She screwed up her already considerably wrinkled face and asked how I could stand it. They smelled. This was astounding coming from a woman who held that you risked pneumonia if you took a bath--and so didn't.

In the early 2000s I decided to write a story in which a fictional Austrian oma came to Montreal, where she was charmed by her granddaughter's Polish Yiddish neighbour. They met when they were sitting outside, taking the sun on side-by-side, wrought-iron balconies. I knew they would be able to understand each other more or less because I can understand Polish Yiddish more or less. I wanted them to have a meal of dumplings.

I had already written the story when it occurred to me to confirm that my Polish Yiddish gentlemen would be familiar with plum dumplings.

As it happened, there was a patient at the hospital who was Jewish and Polish. His wife frequently approached the desk to find out when he might be going for a test or to have me tell the nurse he needed pain medication. She was nice and I asked if she would mind a personal question. Did she know what plum dumplings were? I had my eyes on my hands as I described how they were made. A whole plum was wrapped in dough that was made from cottage cheese. The dumplings were simmered and then rolled in browned, buttered breadcrumbs. Only then I looked up. Tears were streaming down her cheeks. She said this was the last meal her mother had made for them before they were taken to the concentration camp.

I was appalled that I had awoken a traumatic memory. I was freaked out because that was what happened in my story when the granddaughter makes plum dumplings to serve her oma and her Yiddish neighbour.

I apologized but the woman told me she was glad I'd reminded her of how her mother used to make plum dumplings. She hadn't thought of it for a long time. She thanked me.

So yes: In dumpling we trust.