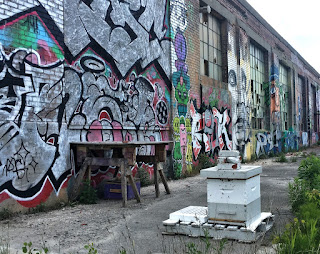 I could have zoomed on the beehive but the graffiti belongs to the environs. Note that 'zoom' in this instance is a photo editing term. Before that, you 'zoomed' with the camera lens. Before cameras, 'zoom' was a sound word, the noise of something moving fast. Once upon a time, it was a sewing term. However did it become a social media app?

Me, too, I kept my distance. But of course, it's in the Pointe. 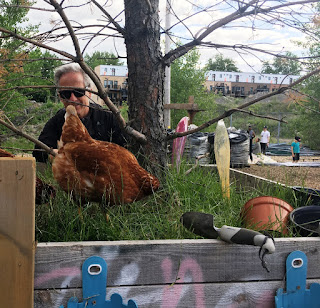 R is trying to engage this cool inner-city chicken in chat, but she's not interested. His hair is pandemic long but no match for a red rooster comb.

The chickens belong to an egg-laying initiative at the Batiment-7 in the Pointe. Also to educate kids--and maybe even some adults--as to where food comes from.

This is one happy, well-fed chicken. 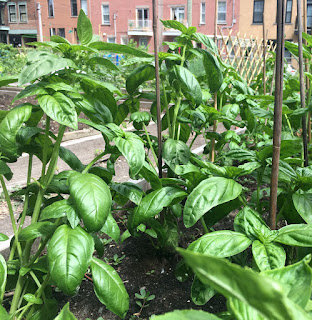 The many people who belong to Montreal's community gardens were not allowed access to their plots until... mid-May, I think. They are now open with sanitary protocols.

The basil seedlings survived marauding insects and one heatwave. So far at least. 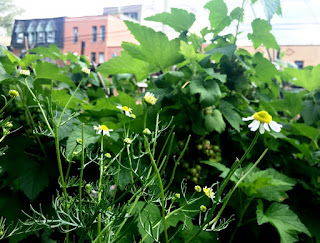 The chamomile is posing against the black currants that I'm looking forward to. Black currants aren't readily available in Montreal, even at the market--and expensive when they are. I love black currant jam.

This wealth of growth is set in urban Montreal.


The last picture is called Find the Chicken. 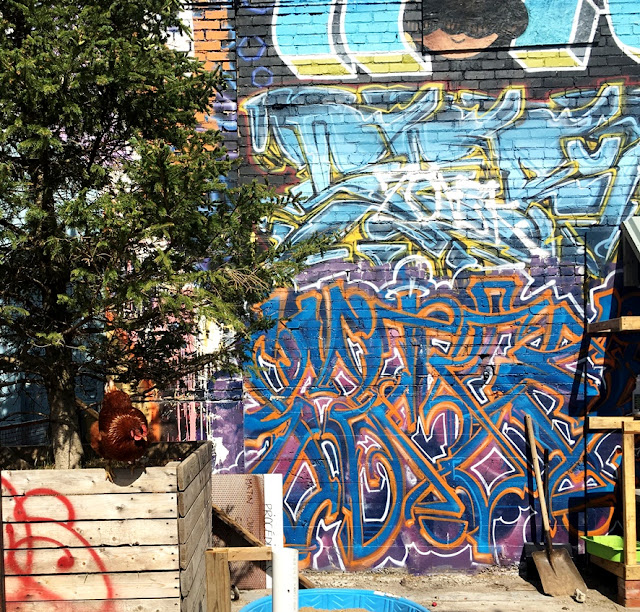 ps Chicken pics were taken about a month ago. (R's hair is longer now.) We stopped to see the birds today but there are only two hens left. One hen and a rooster gone. Apparently two foxes had visited. The open area where the chickens used to roam has now been enclosed with chicken wire. So... there are inner-city foxes too.
Posted by Alice at 3:45 PM