Things that jump over the fence in the night 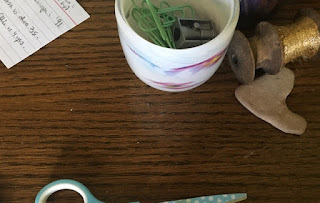 I don't need a pandemic to stay home and notice the minutiae of daily life because I already spend a good deal of time at home by myself scribbling words.

One small observation is how the people who live across the alley on the second floor have lights strung year-round over their balcony. The lights aren't kept on all night, but they're shining when I get up at 6:30 on a winter morning. Snow, no leaves on the branches, cold brick, looped strings of lit bulbs. It's cheerful, yeah, on a dark winter morning, the sun not up yet.

I have only ever once, a few years ago, seen anyone on the balcony. A girl of about eight years old playing by herself. At the time I wondered if she had a bedroom window that faced the balcony and the parent or parents strung lights so she wouldn't… I don't know… be afraid of the balcony at night. Or maybe so she would see lit smiles through her curtains. 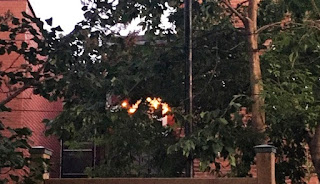 The girl would be a young teen by now. I've never seen her again. Maybe she was only a visitor, sent outside to play while the adults gossiped.

And anyhow, a person doesn't need a kid to do things that might seem childish or needlessly reassuring and cheerful, says me who does not have a child, yet keeps a heart-shaped stone, a magic spool of gold thread, and other tchotchkes on her desk.

The lights aren't as visible through the leaves. I'm not as likely to notice them in the summer, but they're still there. 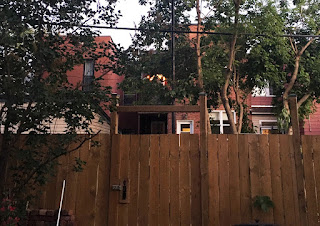 Yesterday R said that one of the lightbulbs was on the ground by his bike in our yard. That would entail a trip from the balcony, along the ground or through the trees--leaps across branches--over the neighbour's fence, then across the alley and over our fence. Under the fence is possible, too, at strategic points.

An adventurous squirrel or raccoon? To what end? The tiny, inner-city backyard that we think of as ours becomes another place at night

Last week we were gifted a large blue flip-flop.
Posted by Alice at 5:59 PM