"a thousand words" / Sharpie vs camera 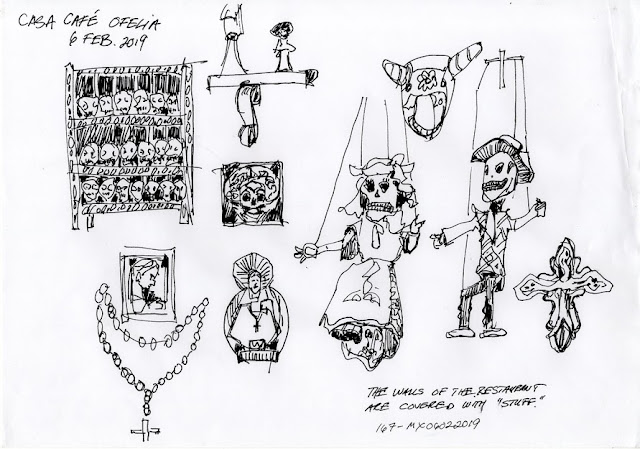 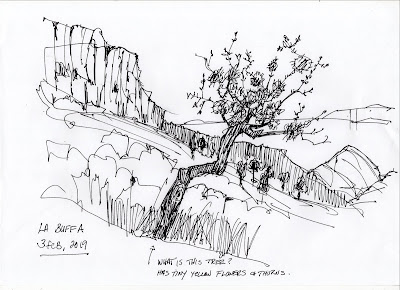 I take pics with my tiny snapshot camera because it's fast and easy and I like to. I refer to images when writing to help me reimagine a place, find the words to describe a scene or an object--figs growing, the hug of a tight skirt, a hot water radiator such as I used to have in an apartment thirty years ago.


A camera is fast and easy, but I envy people like R who have the facility--and decades of practice--to draw. The lines of a sketch are more expressive than the flattened image taken by a camera. The camera doesn't discriminate. What to do about all the extraneous visual disturbance that ends up in the frame? (Don't tell me about photoshop. I can't be bothered.) I like that the pencil only sees what it wants to. 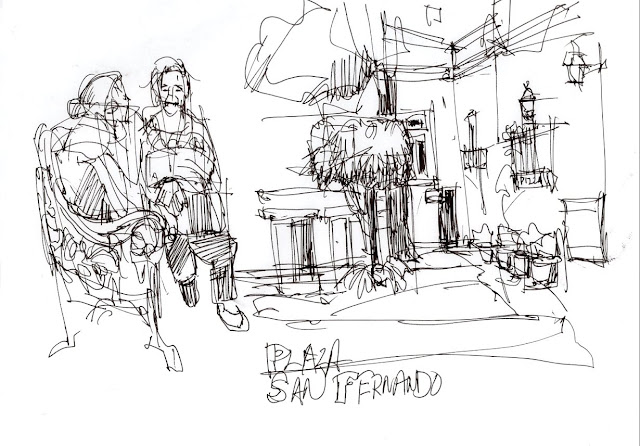 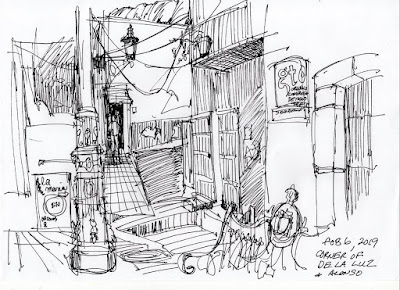 I say pencil, though I think lately R has been using predominantly pens. That was the case recently in Mexico when he ran out of the German pens he likes to use and we began the search for new pens. Mexico City has at least one humongous stationary/school/office/art supply market. Venues and stalls are packed tight together. Aisles both curve and cut angles. Some are broad, some tight--when several concessions have been squeezed into a space. The maze was so confusing that when R decided to return to where he'd bought a pad of paper to buy another, he couldn't find it again.


R doesn't like designated art supply stores because he finds them overpriced, but this one caught our attention because of the mannequin in the window. Waxed moustache, shaggy mutton chops, fedora, patterned shirt, white trousers (pressed!), barefoot. I don't know if it was ironic. Note that R does *not* look like this. Not even ironically. 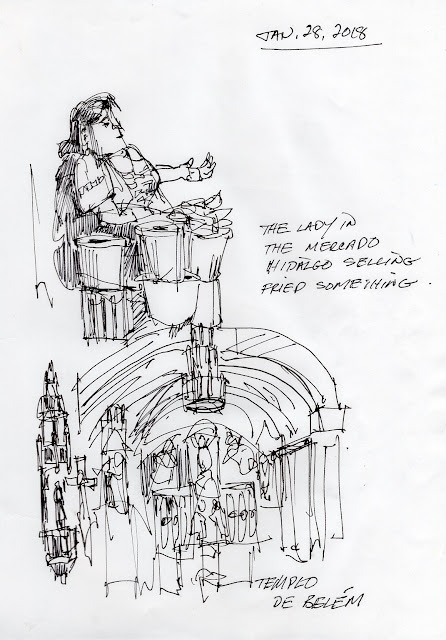 In Guanajuato we visited several stationary and paper stores. R found a pen that seemed promising and bought several, but when he was out and about, sketchbook open, the pens didn't work. They cost enough that it was worth going back to the store. The woman there calmly took the pens, one by one, and they worked for her. Ah... because you had to be at a table and hold the pen perfectly perpendicular to the paper--which isn't the case when sketching outdoors.


In another store he was urged to try a thicker marker pen--actually a Sharpie. He liked the thicker strokes but could finish a Sharpie within a few hours. He did spend a lot of time sketching. Got up every morning at 6:30 and headed off into the cold dawn streets. We were in the mountains. Temps dropped to 2C at night. He only returned at 9 when breakfast was served. I stayed in bed, made myself tea, read. Sometimes he took his paints and pots of water. 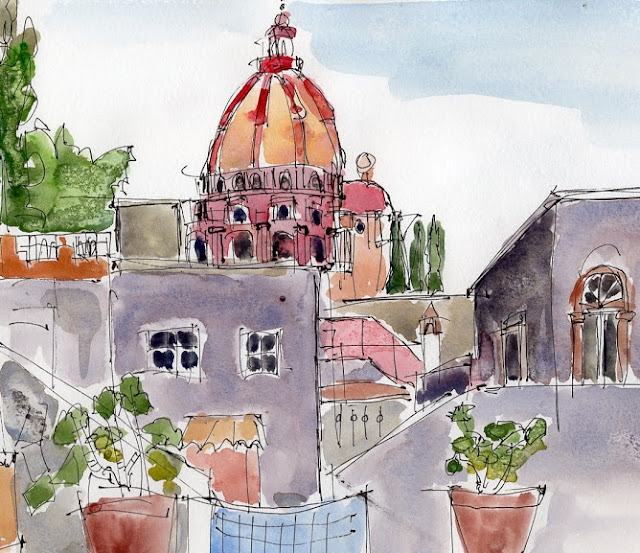 Here's one of the Sharpie sketches. I'm pretty sure the dump refers to the hotel and our room. 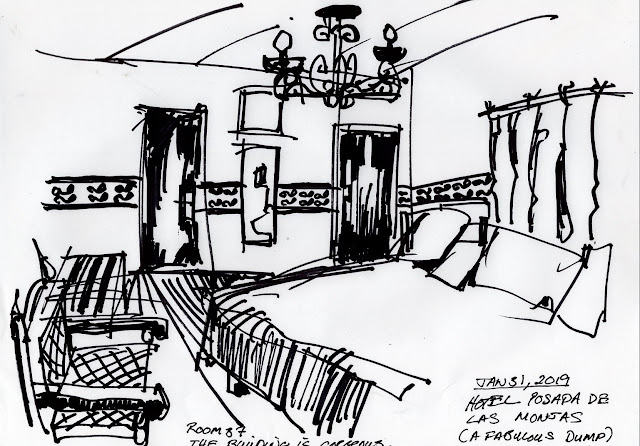 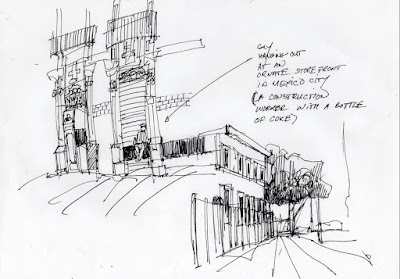 R finally--happily--found pens he liked in the Mexican equivalent of Bureau en Gros aka Staples. I don't recall what the store was called in Mexico but the employees wore the same red shirts. He liked those pens so much that he returned two days later and bought the whole stock.

(He did the same when we were in Vienna a few years ago and he found the shaving cream he discovered on a trip some years previously in Berlin. He bought every tube of shaving cream in the pharmacy, not knowing when he'd find it again. We've looked and it can't be bought online. It's not a fancy or expensive shaving cream, he just likes it.)


Since I'm very particular about the tactile feel of the notebooks and pens I use, I understand his quest for a pen that has a certain tip and glide and feels good in his hand--although I've learned from experience not to expect to find the paper I like en route and usually bring what I might need with me. 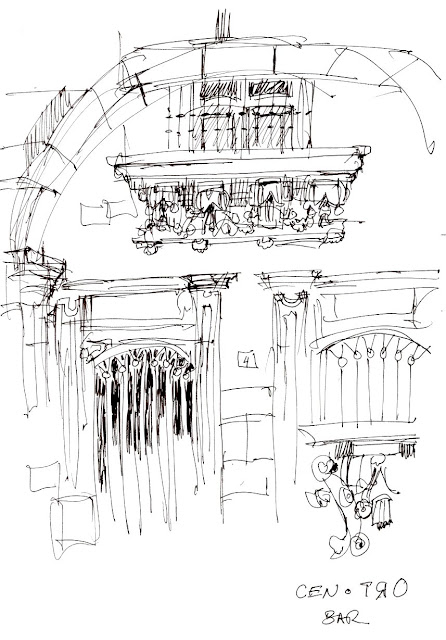 I don't travel with my fountain pen because it's magic and I'm terrified of losing it. Mind you, I felt that way about my previous fountain pen that I had for twenty years and that finally leaked so much that my fingers were stained blue and it couldn't be repaired, not even by the fountain pen wizard in the pen shop in the Cours Mont Royal. I survived finding a new pen and with time it has become equally invested with magic. 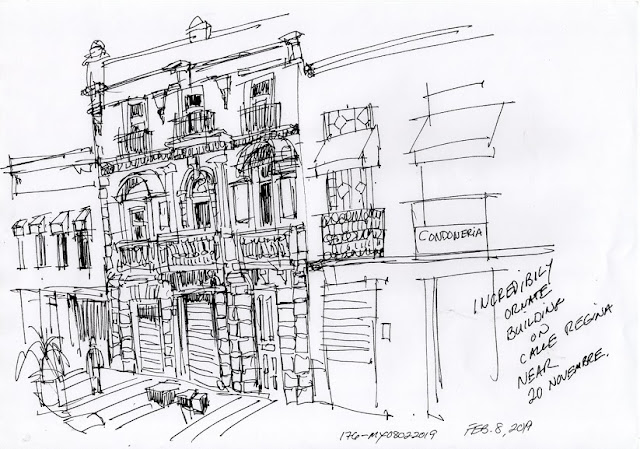 Sometimes I wish I could draw and R tells me anyone can draw. Yeah, well... I don't know how to get angles or foreshorten or control what I'm doing. He says Matisse didn't concern himself with foreshortening either. Just draw. Follow the line on the page. 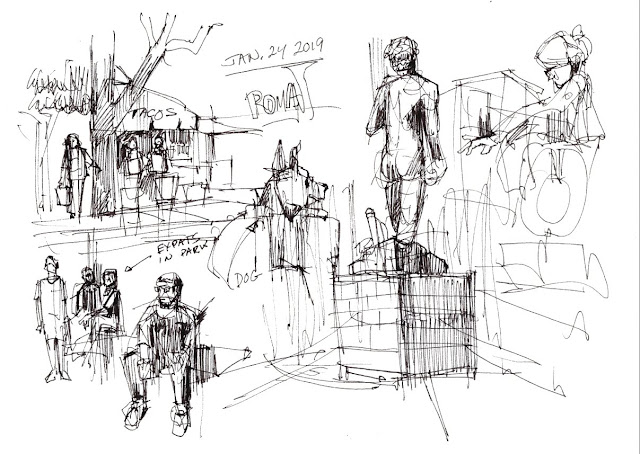