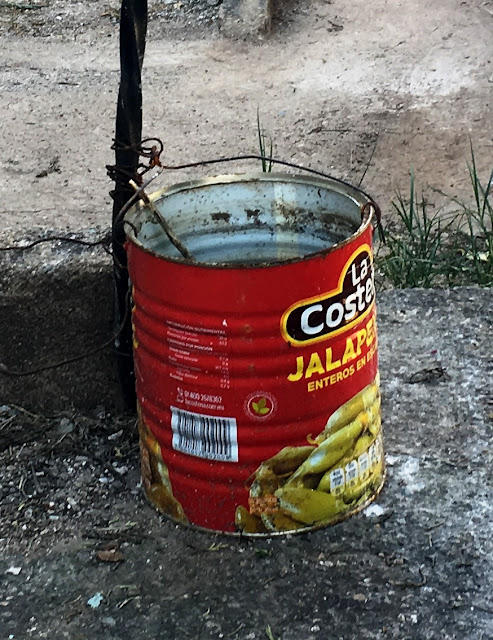 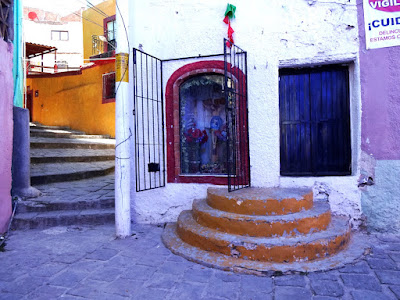 I wanted to visit the cemetery in Guanajuato in Mexico. It wasn’t on the tourist map the hotel gave us, but I looked up el panteón on Google Maps. It was behind the mummy museum, which was well-signed throughout the city, though far enough outside the centre that directions were for people who were driving. Not the nicest roads for walking. 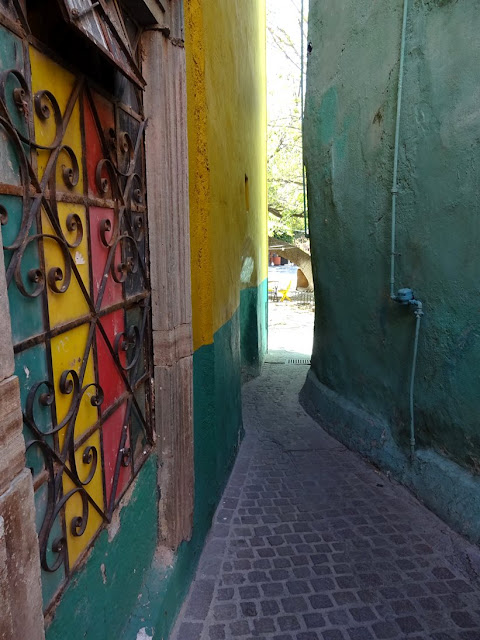 We headed up roads that seemed to angle in the same direction. I stopped to ask a man if it was the right way. He’d been to the  market and bought a bag of poblano peppers and a dozen avocados. He’d arranged the vegetables in two neat rows across the bag he’d spread before him on the sidewalk where he sat. That would be his income for the day: whatever profit he could make. In retrospect, I should have bought a hot pepper. When I asked about the cemetery, he nodded up the steep hill at the row of cypress trees along the top. Los arboles, he said. Look for the trees and you’ll find the cemetery. 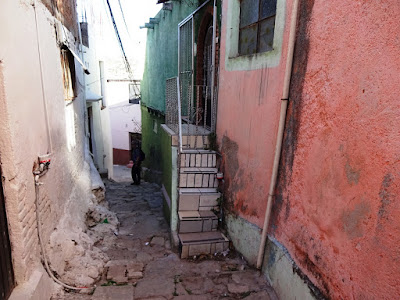 The road climbed, twisted away from the trees, toward them again. Whenever it forked, R guessed which side would head us the right way. I was of no use because I’m directionally challenged. Turn me around twice on the street where I’ve lived for the last eighteen years and I might not be able to find my way home. 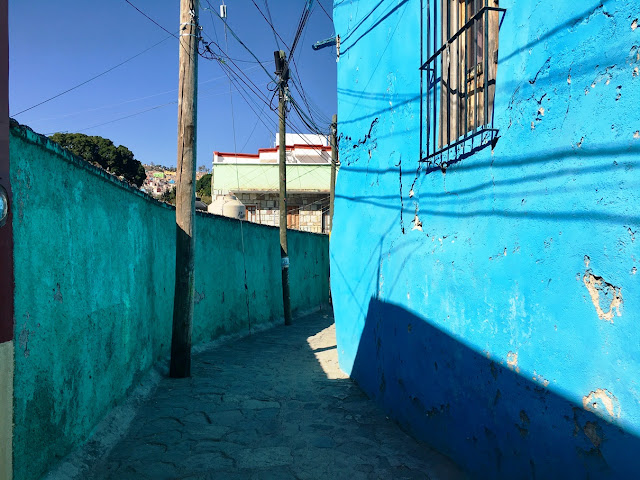 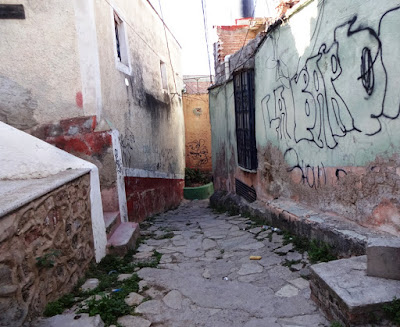 When I say we were following roads, I don’t mean asphalt. The surface was concrete bricks, stones and cobbles. Wide enough for cars, though, which was not the case on the other side of the city where the roads were steeper. For foot traffic only. That included the gas man who pushed a dolly of canisters along the cobbles at 6 am, calling out Gas! Gas! Residents had to lug their groceries up, carry their bags of garbage down.
Our hotel was on that side of town. 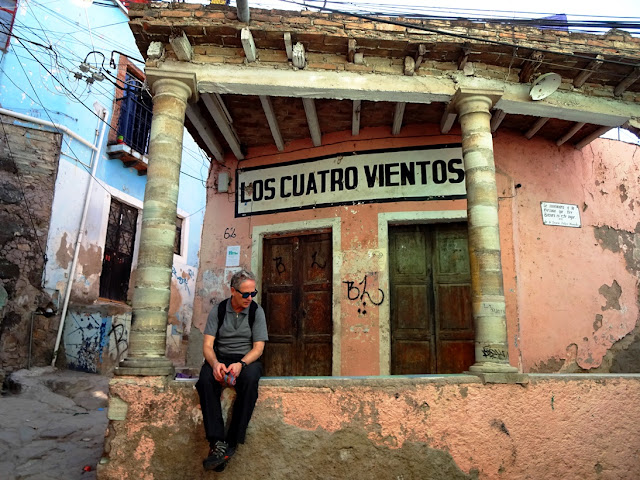 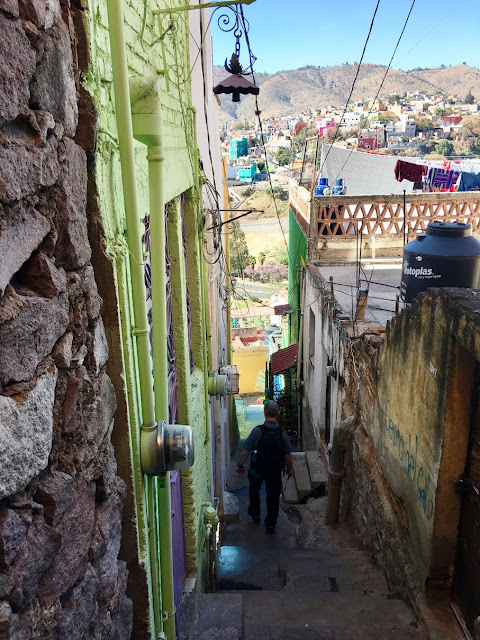 What also happens on that side of town are corridos in the evening. This is not to be confused with a corrida which is the running of the bulls. A corrido is a narrative ballad led by singers and musicians dressed in black velvet jackets and breeches. They walk up and down the streets, singing and strumming. People sing and shout the responses. The word amor is repeated often. Long stories are told. There are laments, there is laughter. Some buffoonery. To join the group, you need to buy a ticket. Bring your own tequila.


The first night that R and I heard the singers we were charmed. We heard them well since one of their gathering points was in the square next to our hotel. Their route when they set off was past our balcony. Guanajuato hosts a large Cervantes festival every fall, but the corridos happen every day, all year long. Don Quixote T-shirts too. Since we stayed in Guanajuato for two weeks, the singing began to seem less charming. On weekends there could be as many as three corridos in an evening, the last one well past midnight. I think it’s great that they honour Cervantes, though it also seemed like another excuse for more noisiness and tequila.

R and I were still walking up the hill, aiming for the cypress trees when we could see them past the buildings. Stucco blocks in every colour are crammed up against each other, stacked on an incline. Guanajuato climbs the slopes that surround the historical centre of the city. The vista is onto hills/low mountains. They don’t seem high because Guanajuato is already at 2000 m/6,600 ft. (For comparison, the village in the Tirolean Alps where my father was born is at 1,100 m/3000 ft.)

One afternoon R and I set out to hike up one of the hills but I wasn’t wearing the right shoes for the scree once we got off the path and I didn’t want to risk sliding, falling, and getting a scrape. I take a blood thinner. A scrape would be dumb. I was happy to get as high as we had, to breathe mountain air. 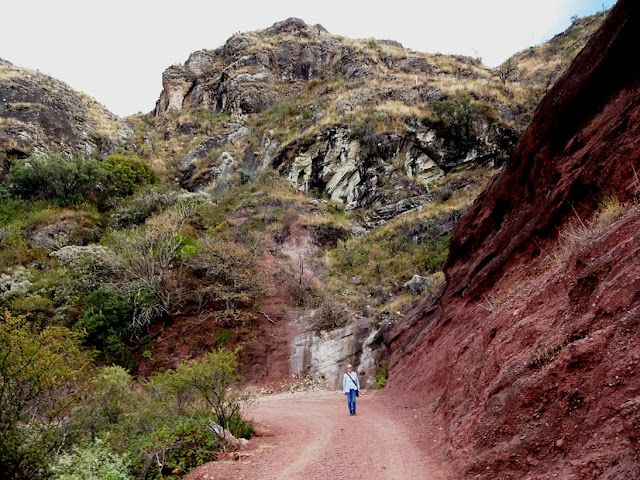 The cypress trees were close now, we were hungry, we could smell frying. Up a set of stairs was an eatery called Rosa. Four tables against the white-painted railing had a view onto the town. Rosa was cooking on one side of the small room behind a counter. She had a grill, a flame, several cast-iron saucepans. It was busy and she’d called her two teenage daughters who must have been home from school on their lunch break—still wearing their blue skirts—to come help carry dishes because the waitress had to step behind the counter to help her. There was a menu on the wall. Mostly she was frying meat she served on large plates with red rice—rice cooked in tomato juice. We sat at the only empty table against the counter and ordered chilaquiles:  tortillas cut into strips, dropped into a pan, doused in red or green mole sauce, shaken up over the flame, slid onto a plate. I’d asked for no meat or eggs. Rosa was making several meals at a time but gave me a questioning look before adding ingredients to our plates. White cheese crumbled on top? A drizzle of cream? Sí, sí, está bien. Another couple came in and sat at the corner of our table because it was the only place left. They were Mexican-American, joking in Mexican with her, talking American between themselves.

There were more people in the street now because it joined up with the main road to the mummy museum. El Museo de las Momias. The day before we left Guanajuato we met a Canadian whose mother and grandmother had lived there and who was now retired there himself. He said that when he was a child he’d gone with an aunt to visit the mummies. At that time they weren’t kept behind glass as they are now—to stop people from plucking off bits of skin and hair. Pubic hair was especially prized. His aunt had swung her shawl around her shoulders. They didn’t notice she’d caught a mummy until she started walking again and dragged it along behind her. They and everyone around them shrieked. 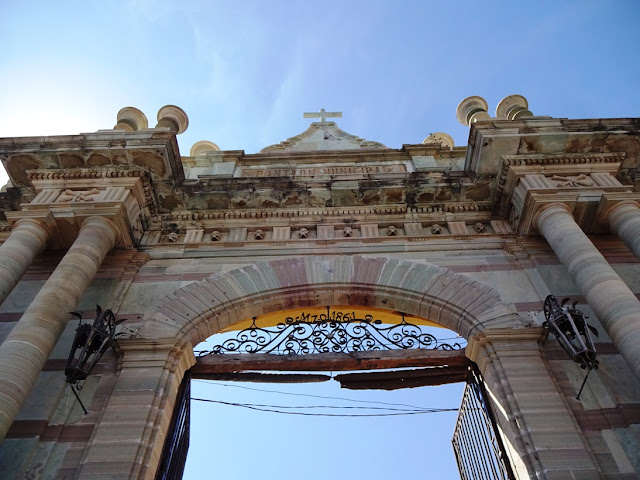 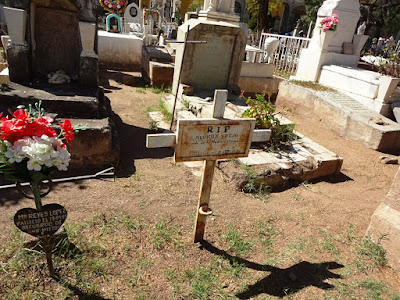 The entrance to the cemetery was a grand stone wall with an arch and a frieze of skulls. The layout of plots was peaceful, relaxed, jumbled.

Here and there lay large, empty cans of jalapeño peppers and I wondered if that signified wishes for mucho piquante in the afterlife until I saw flowers jammed into a can. They were cheap and handy, good-sized vases. A skinny cat flitted through the stones, following and avoiding us. 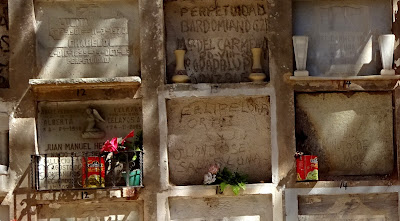 The walls of the crypts where urns were stored were… 10 m/30 ft high? I’m not much better with height than direction. Not everyone could afford to have names engraved. 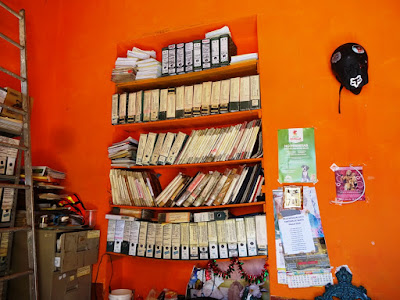 The administrative office was a small dim room with only one desk where a man sat before a computer. (I recalled the character in Cora Sire’s fine novel, Behold Things Beautiful, who works in a cemetery in a fictionalized South American country.)  I asked the man how I would find a particular tombstone. I wasn’t looking for one but I wanted to know how to proceed if I were. He said he would need the date of birth—nacimiento. Interesting. I asked if he had all this information in his computer. No, he pointed at the wall where thick binders sagged on shelves.

Later, when I told the Canadian with the shawl-flinging aunt that we’d been to the cemetery, he asked if we’d met the man who worked in the office. Yes, he said, everything is stored in those fat binders—and the shelves they’re on are made from old coffins.

Now, back home again, I’m wondering if they were used coffins or coffins that had been made but never used or… 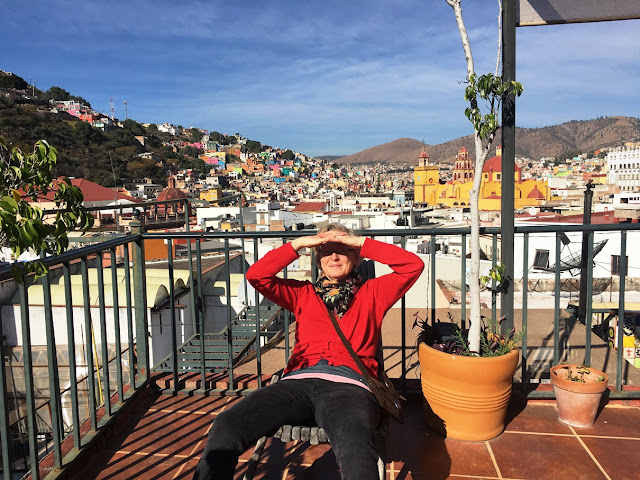 Except for the cemetery, the pics were taken on the other side of Guanajuato.
\
Posted by Alice at 9:37 PM