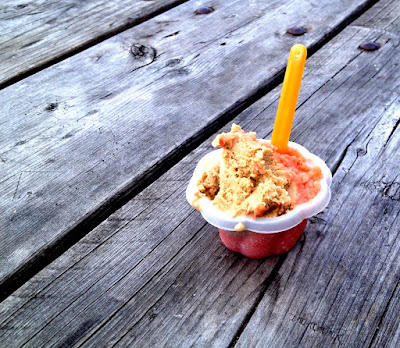 It all ends well because here's the espresso and blood orange crème glacée I had yesterday afternoon after a very slow walk to the Atwater market. If it ends with ice cream, it can't be that tragic.

About two weeks ago an ongoing flirtation I have with sciatica became so severe that I was almost crippled. Couldn't stand, couldn't sit, couldn't lie down. Over-the-counter relief that I can take with my blood thinner and that doesn't give me nausea wasn't even touching the pain. It had to be bad because I finally went to ER (which I will not do unless I feel I'm close to death).


There I was assessed by a doctor who didn't listen. I told him I had mechanical heart valves. I told him I take blood thinners. I need to take them for the valves to function correctly. Without blood thinners, blood will clot around the valves. Blood thinners are a fact of my life. I didn't think I needed to scream that at him. Even busy and efficient as he was, it should have registered because I asked if he would order a certain blood test that is only done to test the level of anticoagulation, thereby saving me a trip to have it done the next day as I was supposed to. (There are some other details that played a role--I had just had a test and was still being bridged with Fragmin, another anticoagulant--but I told him that too. I did.) He was focused on solving the sciatica/pain problem and gave me a cortisone injection in my hip. I didn't see how long the needle was because I was on my side and in such pain that he could have taken a Japanese sword to me. R who was watching said the needle was 5". Even given spousal anxiety and exaggeration, it was probably long.

He told me that it would take a few days for the cortisone to take full effect. The pain certainly didn't diminish the first two or three days. Nor did I look at the painful area. It was hard enough just to pull down my pants to use the toilet. I couldn't put my socks on. I was tossing my underpants at my foot like that ring on a peg game. I did notice bruising spreading down my thigh and then swelling but I wasn't sure if that was expected. If you're on a blood thinner, you tend to bruise more than most people do. It was only when R helped undress me in the evening that he said my affected buttock was purple. It seemed to me it was significantly ballooned too. I tried to reach a doctor but was not successful. Message on the answering machine never returned. (That's being looked into.) I did not want to return to ER.

Three days later in the morning I could no longer ignore that my knee was swollen and wow! What coloration! I called my ex-boss at the hospital who said to call my cardiologist who told me to get to ER where I was seen very quickly.

I had bled into my leg. Not just subcutaneously but into the muscle. My hemoglobin was still dropping. My blood thinners had to be stopped. I was given a snazzy medication--Beriplex--that reverses a week's worth of Warfarin in 15 minutes. That, however, left me with no blood thinners to protect my heart valves. There's a window of time that that's safe, though as the window gets smaller, the risk increases. I wasn't happy about that. 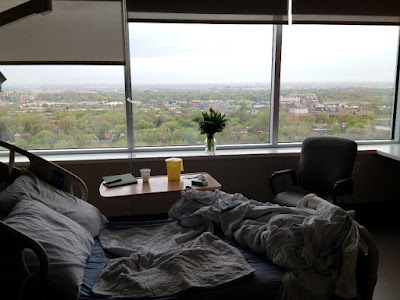 The one unexpected and pleasant development was that I was hospitalized in the spanking new K pavilion (at the Jewish General) where my old colleagues from my days as a unit coordinator now work. I saw many old friends and re-found the rich backdrop of sound that I hadn't even realized I missed.

I would sit in my room and listen to the layered mix of Carib English, laughter, Arabic, teeth sucking, doctors discussing cases, Quebecois French (or accented English), machines beeping, argumentative--but not arguing--Creole, carts wheeling by, prayer from a patient's room...


The food improved once I spoke to the dietician about getting fresh fruit and yogurt and preferably vegetarian. 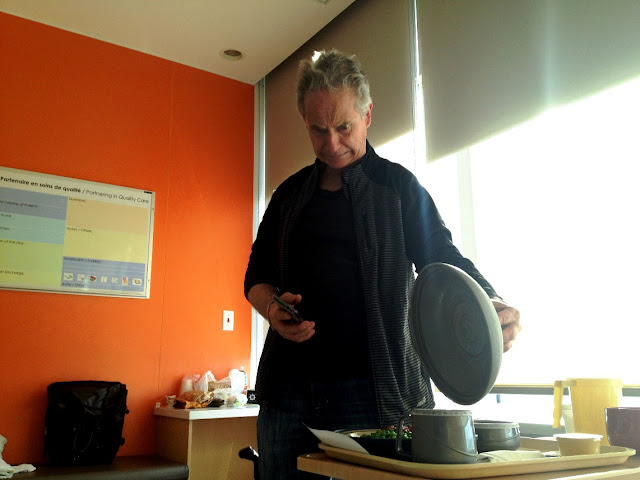 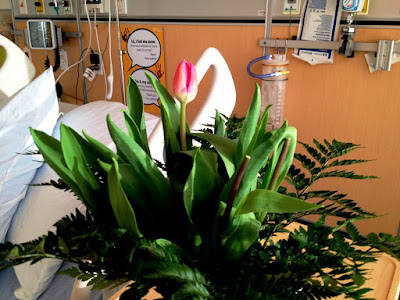 My friend who thought I'd be lonesome for my backyard where, as I kept lamenting, the squirrels were beheading my tulips sent me a bouquet of beheaded tulips. As the note said: If you have crazy friends, then you have all you need.


In with the grab bag of good and bad that life throws, I was reading the French translation of my novel Five Roses which I love! I have a hard time reading my own work once it's in print because I continue to see things I'd like to improve. Reading the novel in French gave me the distance to appreciate it differently. I am so very happy! AND I got the news that I received a grant from the Conseil des arts et lettres du Québec toward the writing of my next novel! 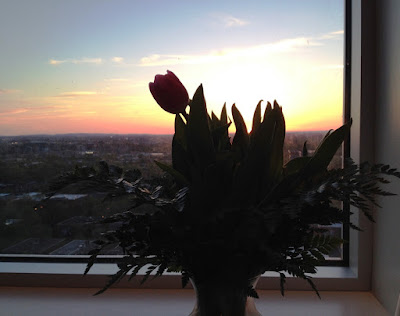 But there I still was in the hospital, albeit in a gilt cage--large, lovely room with en suite bathroom and shower and huge windows onto the sunset--hoping not to have a stroke. Am I being melodramatic? Maybe. But even a small percentage of risk is a risk I shouldn't have had to take.

There was some concern that starting anti-coagulation might start the bleeding again, so that was done conservatively. Small injections to start with. Yesterday I was able to come home again. The swelling had gone down but I'm going to have a bruise for months I'm told. And although I no longer have severe sciatica pain, I do still have pain and will be seeing a physiotherapist. 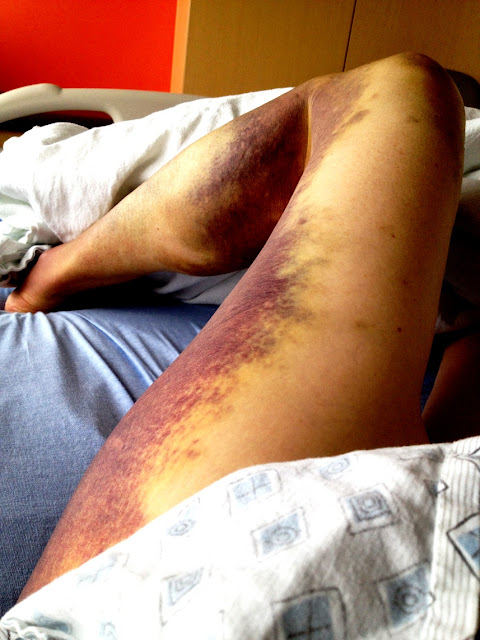 I don't want to write about the chat I had with the doctor who administered the cortisone. Though I will observe that his quick, cost-efficient assessment and processing of the patient cost the hospital seven days of hospitalization, specialists' visits, nursing care, CT scans--not to mention the week I had to spend there. Sure, it could have been worse but it also didn't have to happen. 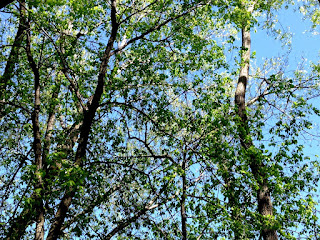 I came home and walked very slowly to the community garden Pointe-Verte where everyone else's gardens have tiny plants and stakes in place and my plot is a mess of baby maple trees, but it hurts too much for me to stay bent or to do anything just yet. I sat in one of the Adirondack chairs under the trees and had a snooze.

And an ice cream.

Then followed this gent in argyle socks across the bridge back to the Pointe and home. While I was in the hospital, the leaves came out and spring finally happened. 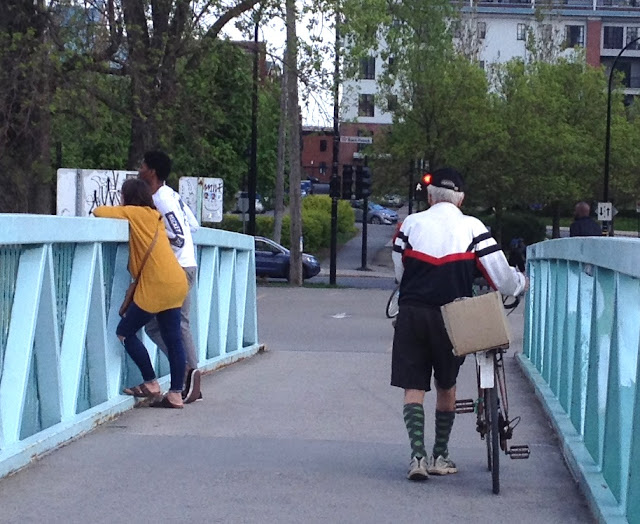