I'm not an overly sociable person. I appreciate my friends, but I also need a lot of time alone. I'm not gregarious. I avoid crowds.

Too many people all doing the same thing can even make me panic a little. R and I almost broke up in 1985, a few months along when we were backpacking, and we were walking in Florence in the evening and he wanted to join a procession of white-robed monks holding candles. He'd either seen a sign or guessed that they were marching for peace. 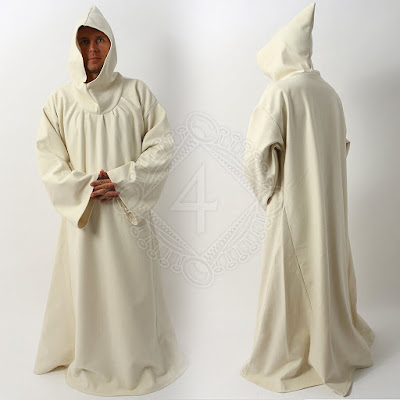 It was a slow and stately march. The monks weren't moving aggressively. But they were grouped and hooded on dark, narrow streets. I couldn't make out their faces and I felt there was something menacing in the flames of their long candles.

I can't explain my reaction except to call it crowd-panic which I'd felt at other innocuous events like folk festivals--people playing guitars and dancing barefoot--that I'd even paid to get into. I know my response wasn't rational.

But I was in the grip of it and I refused to join the march. When R asked why, I stammered that I thought they were KKK.

I'm not proud of that moment. But why did the monks have their pointy white hoods up, shielding their faces?

In my defense, a few weeks previously I'd been mugged in Barcelona. My travellers' cheques and passport--robado! Dealing with the various authorities in Barcelona and then Madrid was identity-numbing. So maybe I was still in shock. 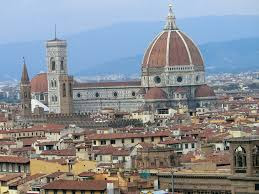 R couldn't believe what I'd said. He was ready to pack his bag and catch the first train south, even though we had a cute room in a palazzo with a view on the Duomo, a bottle of local Spumanti chilling on the window sill, fresh fennel, prosciutto, and crusty bread waiting. I knew I could head to Austria where I had family. We would become another couple who couldn't survive travelling together.

Except we did, and R only rarely mentions the time I thought monks on a peace march were KKK. Though I know he remembers.

I was surprised today to realize how companionable it felt to be sitting in a hot tub with two strangers. The hot tub itself wasn't beautiful. It was in a YMCA that I doubt has had a makeover since it was built in the 1980s. Colours were army grey, pale green, beige, the lights a stark, ugly-making white.

We were three women whose gene pools hailed from different parts of the world. Two of us were middle-aged, one a generation younger. Once upon a time two of us had straight hair. Mine now has white and grey that makes corkscrews. My hair used to be the reddish blond that one of the women who was born with black hair now dyes hers. I wondered if the women's backs were sore because of strain or work they did--like myself, spending too much time at the computer. Or maybe they were just relaxing. We didn't speak. I don't know that all three of us had a single common language. We were all of us subtly trying to manoeuvre to a position to get our shoulders massaged, though the jets were too low. We were and weren't together.

It's taken all these years but I could probably join those monks now. Maybe.