I'm writing a story about death. It's not a sad story. But it is about death.
Thinking about the story has led to interesting talks with R who works in a cemetery.

So it can happen that when we're in another country, we visit cemeteries. Not to look at famous people's tombstones, but simply to see how it's done. 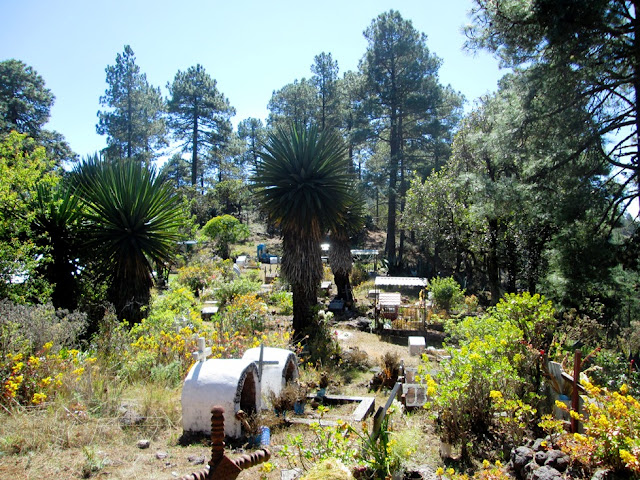 We were remembering Cuajimoloyas, a small village in the Sierra Norte mountains in Mexico. A man who passed us in the road asked how many hours it had taken us to get there from where we lived. I said we'd come the greatest distance by plane. He said to include that too. I tallied up the hours of our trip from Montreal to Mexico City to Oaxaca--by plane--and the drive to Cuajimoloyas. He grinned hugely, delighted to inform me that his son who had gone to Japan had travelled even more hours! I was as delighted to tell him he was right.

While we were there, we took a walk in the cemetery. At one point I heard voices and we discovered five men digging a grave. One was in the hole with a spade and shovel. The others sat nearby, talking so that he wouldn't be alone in the hole. They were surprised and a little annoyed to see white tourists wandering through their hallowed ground. I told them that we were having a look-see because R worked in a cemetery and wanted to see what theirs looked like. 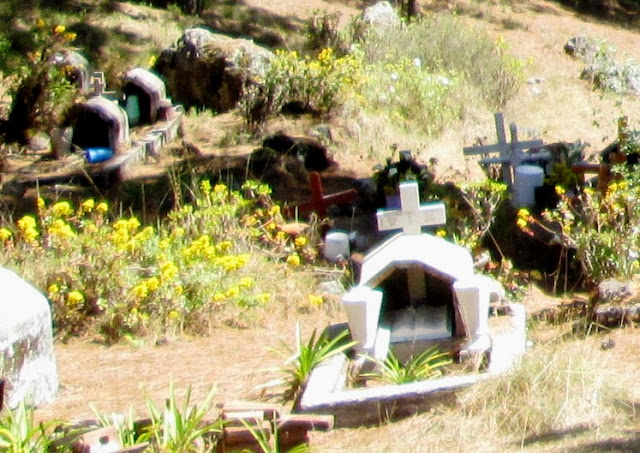 They wanted to know how their cemetery compared to the one where R worked. I said the trees were different and that it wasn't possible to dig holes when the ground was frozen. I don't think they believed me when I said how high the snow could get in Montreal. I said machines were used to dig our graves which they didn't think respectful of the dead.

They asked how big R's cemetery was. A million dead, I said. Un millón muertos. Whoa!!!! They crossed themselves and gaped. They wanted to know if R wasn't terrified to be among so many dead. He told them the living were more of a problem. They liked that. They said it was okay if we took a few pics. We wished each other un buen día.