saving the planet at the grocery store and other city encounters

I had to buy pressed cottage cheese which I can usually only find at a kosher or "ethnic" grocery store. I use it to make Topfenknödel aka cottage cheese dumplings.

I was two people back in the express checkout. The young woman who had just paid was still talking loudly to the cashier. I assumed she was a friend who wasn't thinking that the cashier was at work. She speaking and doing something... packing her groceries in a cloth bag? all the while talking emphatically. I wasn't listening. I had my earbuds in.

Then, as I got closer, I saw that the cashier was trying to ignore her, as were the other people who had paid and were passing behind her. Her movements were too energetic for simply putting fruit and veg into a bag. She was tearing the plastic wrapping off several packages of pork chops and slapping the raw meat on the cashier's counter. One by one -- three, four, five, six pork chops. She balled up the plastic wrap and tossed the styrofoam trays back to the cashier. It was a crime! How much packaging the grocery store used! And she was mindful of ecology! And saving the planet! More people needed to think about ecology! Weren't they concerned about the planet? Well, she was! Her vegetables already in her cloth bag, she shoved her stack of pork chops on top.

I could have tried to interrupt her lecture to ask why she wasn't eating lower on the food chain if she wanted to do her small yet not insignificant part toward saving the planet, but I didn't get the impression there was a Q&A. 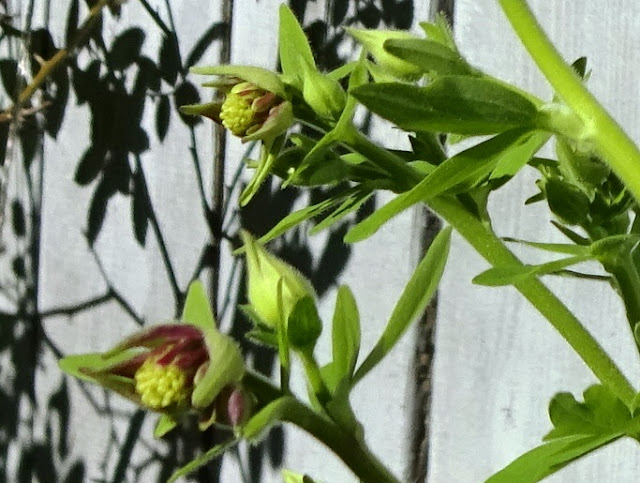 This morning, as I waited for water to boil for tea, I stepped into the backyard to see what was growing. Buds on the columbines, ferns spreading, clematis only starting to send out leaves. We have a small, inner-city backyard with a mismatched wooden fence. The neighbour on one side nailed up boards. The other neighbour asked us to split the cost for a fence with a trellis along the top. We haven't done anything with the weathered planks that face the alley, even though after every winter it becomes ever more impossible to shove open the gate to wheel our bikes out.

Then I noticed the thinning stubble of a man's head over the top of the back fence. I thought he might be walking his dog and the dog had stopped to pee, but a few moments passed and he kept turning his head to the right, then the left, then back to look into our yard again. It felt like a scene out of my novel, Five Roses. I didn't know if he could see me, but he didn't know I could see him or -- I'm assuming -- he would have moved along. I didn't see his shape through the spaces between the shrunken boards, as my character did, because the light wasn't behind him. My character runs to the gate to challenge the man in the alley, but  I didn't want to do that at 7 am, not sure how big the man was. That he stayed there felt threatening enough.

I called out, "What are you doing?" (En français.)

He didn't seem surprised that I knew he was there. He said he was very thirsty and would like a glass of water.

Geez! How can you refuse a person water? I told him to wait.

I still didn't want to open the gate, so I reached the glass over the top of the fence. He drank with loud glugging gulps, then told me that what he would really like was a cup of coffee.

I said there was no coffee. I didn't drink coffee. He suggested I give him two bucks to buy one.

I could have. I should have? But where would we go from there? I didn't want to find him there again tomorrow.  I would have given him money if we weren't having this conversation where I live. I'm not sure I like how I reacted. Or didn't react. I have to think about that. Maybe I was spooked by what happened in my novel.

He thanked me and returned my glass over the fence. We wished each other a good day.