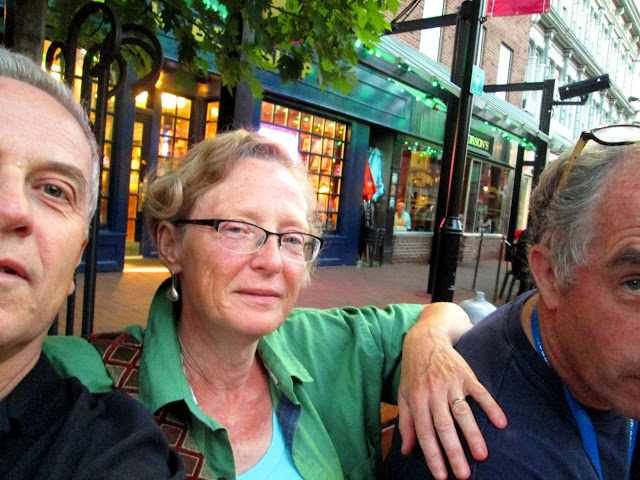 The fourth member of our group is checking out a book in the bookstore behind us.

All we wanted was to go for a drive, have a swim, a meal, maybe spend the night before returning home to Montreal. It was a last-minute decision. A phone call at 9:30. On our way by 11. We'd brought a change of clothes and some towels. I had my meds and toothbrush. I'm assuming the others had brought their essentials. We weren't 100% irresponsible.

I was triply delighted at the prospect of an escape from the city because it was the official release date for my new novel, Five Roses. You bet, I wanted to celebrate. Yippee! What could be grander when you've been in the city all summer than a swimming hole with a waterfall as backdrop, boulders and moss and trees all around? 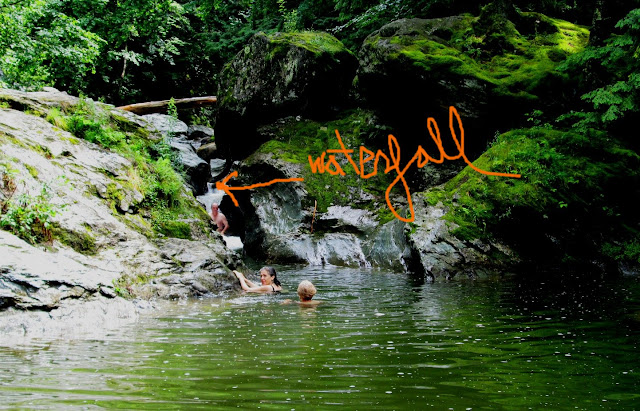 So we left Montreal in search of a swimming hole. Our ringleader knew of one where he used to go swimming when he was a kid. Okay, it was across the border, but that had never been a problem when he was growing up.

The crossing we chose might have been the first mistake. Our place of origin was Montreal. Why hadn't we taken the border crossing closest to Montreal? (Why? Because construction holidays had started. We wouldn't be the only ones headed for that crossing.)

Another good reason: the swimming hole we were aiming towards was farther east, so why not cross the border farther east. Our ringleader is the fellow up top wearing the lanyard of keys around his neck. How suspicious is a man who carries his keys on his heart?

Second mistake might have been the weather forecast. Why would two middle-aged couples plan to go swimming when severe thunderstorms were forecast?

Well, the sun was shining, and we had all grown wary of weather forecasters and their melodrama.

We got to the border and told the very nice person who took our passports that we were hoping to go for a swim. We might spend the night. We were going to drive around, maybe visit one village, maybe another.

The subtext here is that we would be spending money. When you visit a foreign country, that's your role: you contribute to the economy. Generally, that's thought to be a good thing.

However, we were asked to pull aside and come into the office. We debated what we'd said that would make them want to question us further. We had no idea. We'd said we wanted to go swimming, right?

The individual who now came to speak with us asked again where we were going, what we meant to do, and how long we intended to stay. We repeated that we wanted to go swimming, that we might drive around, we weren't exactly sure where, that we didn't know when we would be returning home. Maybe today, maybe tomorrow. We volunteered that we'd brought a change of clothes. Just in case. To us, that sounded like a delightful plan.

Two red flags, he emphasized. Did we not understand that we were guests in a foreign country?

One of us said we hadn't crossed the border in a while and that requirements must have changed. Since 2001, yes, he emphasized. I could see he doubted that we even understood the reference. He was taking serious umbrage at the let's-see-where-the-road-takes-us spirit of our adventure.

So okay, okay, we backed down a little and said that we were definitively going swimming and that afterwards we would visit a certain town. That was our destination.

And? For how long?

But what if, one of us asked, we said we were going to stay the night and then we didn't?

Another wrong thing to say.

I believe the repeated reference to being guests in a foreign country was meant to underline that we weren't supposed to think this country was ours. We didn't. However, it seemed we weren't acting like guests were supposed to act either.

One of us said that if we weren't going to be allowed into the country, that was fine.

I sort of moaned because now I had my heart set on a swim.

At one point all four of us were talking in an attempt to assure the officer of our harmlessness--while we were also telegraphing ???!!!@^^!!??? at each other.

Once we'd made it clear that we now UNDERSTOOD that we should have an itinerary when visiting a foreign country, we were allowed on our way. 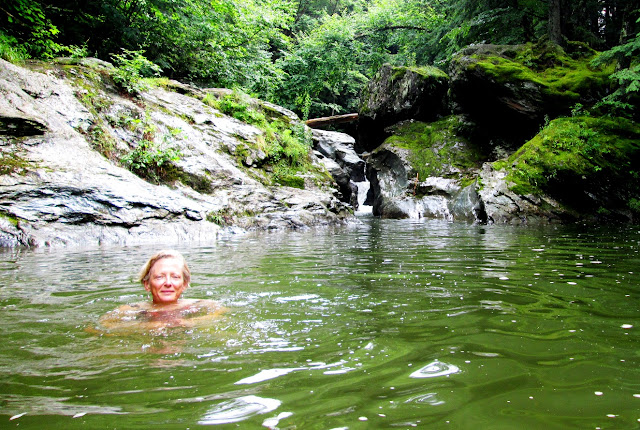 Rain started while we were in the water, but by then we felt refreshed. We dried off as well as we could and drove to St. Albans where we bought a book, some handmade soap, and had warm soup and a meal. (Contributing to the economy.)

Our friend--with the keys over his heart--gave me his green linen shirt (XXL) to keep me warm because my own shirt was wet. The shirt was so large I was enveloped in it. Had I planned the trip, I might have packed a sweater or a dry shirt. The green shirt, though so huge, was much nicer. 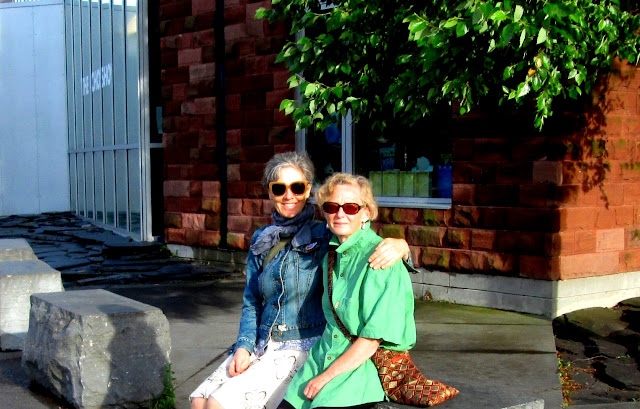 We drove to Burlington where we contributed yet more to the economy. We walked by Lake Champlain. Throughout the day we had one impromptu idea after another. Maybe we should take the ferry across the lake and return to Montreal from New York state. How about French fries, even though we'd already eaten? How about a drink on a terrace overlooking the lake with the mountains in the distance? What about ice cream? 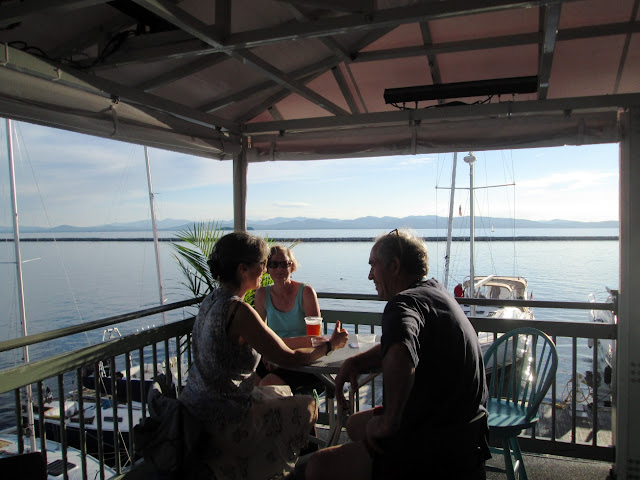 The border official had made us aware of the tenuous and dangerous nature of our venture. Nothing was planned! Who knew where we might end up? What if we'd decided to keep driving all the way to Maine?

We all agreed it was a grand day--and wasn't it sad that the border official would probably never have one like it. 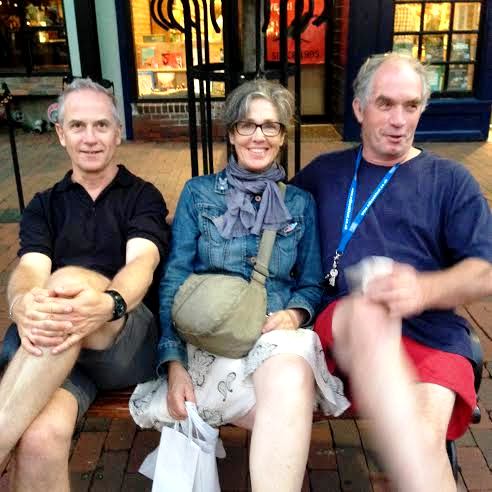