Increasingly, I do things because I need to know how something works or how it’s done, because I want to write about it. Writing makes me go out and explore the world. 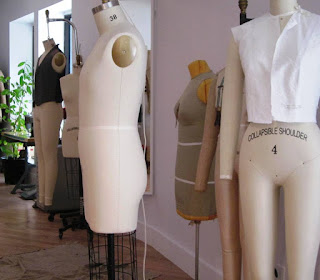 A few weeks ago I spent an afternoon with a tailor in her atelier. She was tracing a pattern she'd made on fine grey wool that she'd imported from England. We talked fabric, design, making patterns, cutting them, and more. Listening to her talk about her work and how she’d trained for it was fascinating. You can find her on Twitter and Instagram: Susana Vera.

On a personal level I'm interested in how one acquires skills, but I would never have contacted a tailor and asked if I could spend an afternoon with her if I weren’t writing about costumes.

Talking with people is one way of doing research. Trawling the internet is another. (How did we ever manage without the internet????) Youtube, books, a camera. maps, looking over people's shoulders. Taking a trip and taking notes. And baking cream puffs, why not? 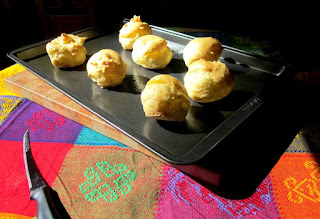 I have a new novel, Five Roses, coming out this summer. The novel isn’t about food, but two of the characters work in a patisserie. I thought it would be fun to include a recipe with the book--and wanted an easy one that didn't require fancy equipment. I used to make cream puffs when I was kid. You don’t even need a mixer. They are that easy. But I haven’t made them for years and felt I should test the recipe before sending it to my publisher. I took a picture in sunlight so you can see how light and airy they are. I poked them with the knife to release steam and keep them dry before they’re filled with... whipped cream, custard, ice cream, jam, sliced fruit?

I also wanted something made with flour since the novel is called Five Roses--for the FARINE FIVE ROSES sign on the south-west horizon of Montreal. The sign was erected in 1948. Each letter is 15 feet or 5 metres high. 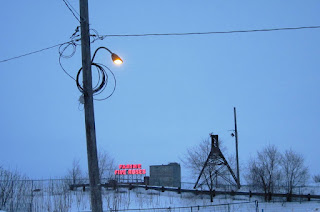 I live west of the sign in Pointe St-Charles, the post-industrial neighbourhood where the novel is set, and on days when the wind comes from that direction, you can smell flour being milled. It gets up your nose.


I didn't write about the milling of flour in Five Roses, but I'm thinking that's something else I want to know about. More research.
Posted by Alice at 2:41 PM