I was lying in the passenger seat of a parked car in front of Frite Alors! on Parc in Montreal. There's a grocery store across the street and R had dashed in to buy fixings for supper. The seat was flat and I had wads of blood-stained café napkins on my chest and lap. I had pushed my glasses onto my forehead because it hurt too much to wear them on my swollen nose, so anything happening outside was a blur. I could hear how people driving along Parc made warning taps on their horns and revved their engines angling for parking spots.

I was biding time, waiting for the bleeding from my nose to stop. I knew it could take a while since I'm on a blood thinner. I probably should have but didn't want to go to the hospital. I've spent enough time in hospitals. Why lie on a stretcher in Emergency bleeding into napkins? I could do right here. I could do that at home. If the bleeding never stopped, then, okay, I would go. But not yet. It had only been 3 hrs.

Then a woman on the side walk started shouting through the window at me. I thought she was alarmed on my account--but these few bloody napkins were nothing compared to the crimson mandala I'd left in the snow. I didn't want her to be upset but I also didn't want to talk to her. This wasn't our car, so I didn't know how to open the window and wasn't going to raise my head--definitely NOT going to raise my head--to try to figure it out.

Then I realized she wasn't alarmed for me. She was yelling at me for lying there with my bloody Kotex on view for anyone who was walking by to see! What form of social abomination was I?

Now I wondered if my door was locked. The rigidity of her body language made me think she might fling the door open any moment, all the better to let the spittle of her outrage splash me. Or haul me off my palanquin into the street? I lifted a fistful of napkins. Look! Not Kotex. Something you use to sop up coffee! But ooooh, they were bloody. In any case--none of which I was explaining to her--I'm menopausal. I haven't used Kotex since I don't know when--but as I remember, they go inside panties, not displayed across stomach and chest. Though I suppose displaying bloody ones would be a kind of statement. Why should a woman hide what happens to her naturally? But even so, if such a woman wanted to make a statement, why hide it below normal sight lines in a parked car?

Where was R?!! He'd rescued me from my accident but now I needed him to rescue me from this woman in a pink tam. I couldn't even lift my head or sit up or I might start bleeding again.

The day had started sweetly. We had the use of a friend's car and decided to head north to the Laurentians to go cross-country skiing. Our skis were ancient--second-hand or garbage finds when we got them, and more time in a closet or the cellar than we ever used them. R was tying up one of his shoes when the tongue tore. The metal bindings on my skis were rusty. But we figured we were fine for a short ski in the woods.

The weather wasn't cold. The trail was freshly groomed. I was reminded of how hale and in good spirits people are when they're striding/gliding across snow. There weren't many people, but all of the women coming toward us were wearing lipstick--which was especially brilliant in the monochromatic landscape. R was wearing the new hat I knit. 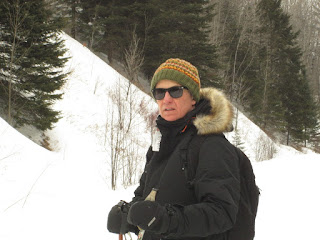 We had a great ski--and no, I didn't have an accident while skiing. What happened was that we decided to stop at a café. Remember those blood-stained café napkins? That's where we stopped. I tried to get my shoes out of the rusty bindings and couldn't, so I squatted to do it manually. As I squatted, I lost my balance and tipped forward with all the momentum of my weight landing directly on my nose. What are the chances of that happening? I don't think I could do it if I tried.

There was an immediate and copious outpouring of blood. I thought of my blood thinner--SHIT! Broken glasses? NO! Bite off tongue? NO! Eyes can open? YES! Neck can move? YES! I was groping for kleenex in my coat pocket and trying not to get blood on myself. I wanted to roll onto my back because that was all I could think to do for a nosebleed. And there was poor R. Not the first time he's had to hover and help salvage the pieces. Should he call an ambulance? No! Another fellow was convinced I must have smashed my head open because there was so much blood. I told him I was okay. He said I didn't look okay. R said I was okay because that was what I said.

We were 5 k from where the car was parked. I asked R to make me a bag of snow to put on my nose-- which, I later discovered, probably helped slow the bleeding. He got me to a bench in a hut where I lay down with the bag of snow on my face. I could feel my nose swelling. My eyes too. When you're on a blood thinner, there's no telling how you'll bruise. R had to ski back to get the car. I suggested he ask someone in the café to drive him back, but he took off. I'm thinking it's the fastest ski he ever did in his life.

Every now and then someone came into the hut and asked if I was okay. I was thinking of the various things I do where I can potentially hurt myself--and every hurt becomes worse because I'm on a blood thinner. Cycling, walking on icy side walks in the winter, hiking along rocky paths... But I hadn't even hurt myself skiing! I'd hurt myself while squatting to the ground. A person can't live in a box. Or maybe a person can. I don't want to. However, I should maybe reconsider cycling by myself.

This morning when I woke, I'd more or less stopped bleeding. It depends on what I do. Bending over isn't a good idea. Ditto going out into the cold. I have a fat nose with a blue bruise on the bridge where my glasses sit. Wearing glasses isn't comfortable. I have a wine-red streak under one eye. My upper eyelids look reptilian. But I don't think my nose is broken. I might call my family doctor tomorrow to see if he wants to look at it and do an Xray.

The woman in the pink tam stomped off before R returned with groceries, but she's still up there, roaming along Parc near the Frite Alors! looking for someone who offends her sensibilities.