buying cheese with a stranger 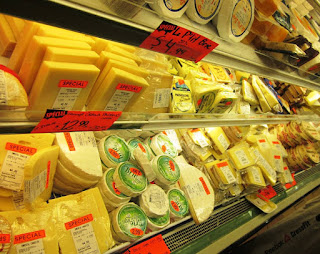 I went to the grocery store to buy cheese. I remember when this store started out as a small family-run business, and at New Year's, if you were a regular, one of the brothers offered you a shot of Metaxa. The store is much larger now, and I haven't seen the brothers for years, though I still remember their names. Sam and Tasso.
But that's another story. This is about the man who wanted to tell me what cheese to buy.
I already knew what cheese I wanted and was waiting for the man standing in front of it at the display counter to move along. I finally leaned in front of him to reach for the cheese when he said, You shouldn't buy that. The one from Switzerland is better.
I said, I like the Canadian cheese.
He winced--sadly. The taste isn't...
I know, I said. I don't like cheese that's stinky. That's why I prefer the Canadian cheese. It has the same taste, but it's not as strong.
Then it can't taste the same.
Moot point.
We'd started out talking French but he'd switched to English when he decided that he spoke better English than I did French. It's something people who've lived in Montreal for a few years do. It's not always a conscious decision. Nor is the person who decides to take the lead always the better speaker. I can be stubborn too, preferring to continue in French. But this man's English was very good, and just then my head wasn't up to the grammar and syntax of j'aurais voulu vous dire--or wherever this conversation was going.
The Canadian cheese isn't as hard, he said.
I'm okay with how hard it is.

Now and then another shopper stretched to scoop a package of cheese from between us. We should probably have moved aside, but we didn't. We were talking.
The Swiss cheese is better, he said now. Simply better.
Better how, I asked? Ethically better?
It tastes better.
But it comes from farther away. It's got a bigger carbon footprint.
He thought, then said, Not if your cheese is made in Vancouver.
Standing there in the cheese aisle, I couldn't check the distance--Montreal to Vancouver versus Montreal to some milky Alpine valley in Switzerland. I said, I don't think they make cheese in Vancouver.
He shrugged. Maybe not.
Though I didn't prefer the Canadian over the Swiss cheese because of its footprint.
Is it because the Swiss cheese costs more? he asked.
No, I said. Though $$$ might have been a factor.
He picked up the Swiss version and held it next to my cheese. Look! The Canadian cheese has more holes!
But I only pay for the cheese, not the holes.
Okay, he sighed. You know what you want.
I do, I said.
But it was nice talking to you. You have a good day.
Yeah, you too.
That was the first time we really looked at each other. All the while we were talking, we'd been gesturing at the cheese on display, the cheese in my hand. He had a tweed cap and a jowly, yet clean-shaven face. Maybe 70? When he looked at me, he must have seen a woman younger than he was, but no longer young, in a puffy winter coat.
We smiled and said goodbye, me with my Canadian cheese in hand.