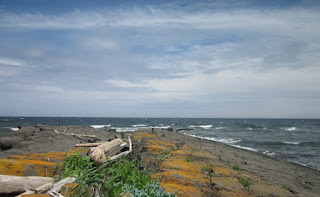 Already home again.
We got up at 5, emptied the fridge, stripped the bed, packed the car. The sun already shone over the water. Clear skies, blue to the horizon.

By 6 we were buying coffee at Tim's in Sainte-Anne-des-Monts. The car we'd rented had satellite radio so we found a station playing what they called Classic Vinyl. Eric Clapton, the Beatles, the Stones, Dylan, Pink Floyd, Neil Young.
When I listened to this music in the 70s, I assumed I misheard the lyrics because they often made no sense. I had a boyfriend who sat over the record player and lifted the needle off the LP every 10 seconds so he and his friends could discuss what they thought was being sung. Sometimes record jackets had printed lyrics, but not always. It was hard for fledgling, would-be rock stars to look convincing if they weren't sure what they were singing.
"Where will it eat us from here?"
"I don't think it's eat. Sounds more like heat."
"Where will it heat us from here?"
"Maybe he means heat like...?"

Driving back to Montreal, we groaned at the lyrics which I could now hear were nonsense, repetitive nothingness, or--more rarely--poetry so inspired it withstands sense. But yeah, it would take earnest 16-yr-olds to try to rationalize drug-addled illogic.

We spent our first day by the sea cleaning floors. In the spring, a friend had gone with R to plaster the drywall on the second floor. I was impressed by how smooth and clean the walls and all the corners and edges were. I meant to take a picture but I was too exhausted from scrubbing floorboards, filling and emptying buckets of water.

I went for walks and let the wind blow away bad thoughts. I wanted to test my new hiking boots on the rocks. 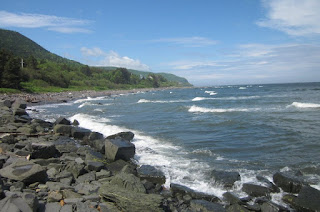 When I bought the boots, I explained to the salesman that I wasn't only shopping for good soles, ankle support, and waterproofing. I wanted boots that would also look good with a skirt. He was dubious. Sure, I told him, a skirt. I couldn't believe he'd never seen a woman in a skirt and hiking boots. Listen, I said. A short skirt, leotards, wool socks, hiking boots. I waved at my legs to show him but I was wearing jeans and his imagination didn't stretch that far. Though I could see he was trying. Finally he squinted and shook his head. Well. I wasn't offering to return to the store and show him.

R and I walked around the headland to the next village where he propped himself against a log to finish reading his book, I Refuse by Per Pettersen which he recommends highly. I shed my boots to wade into the frigid water for as long as I could stand the cold. In the grass behind the log where R was now napping, I spied a wink of lavender. The bloom was no larger than a fingernail but as intricately pleated as a Georgia O'Keeffe vulva. It was--it had to be--a wild orchid, braving the salty wind off the sea. 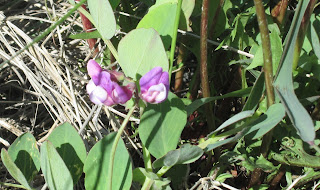 That actually happened on different days--R reading and R napping--but when the sun is high and the waves wash in, time runs into a single endless day.

We had beer and pretzels on the beach; wine, salad and pan-fried turbot for supper while the sun set. Sunset lasted long into the evening. At 10 pm there was still orange smudged along the horizon.

I got some writing done, sitting in my corner by the stove--just a little fire lit for the companionable murmur of the flames--looking out at the sea and the sky. 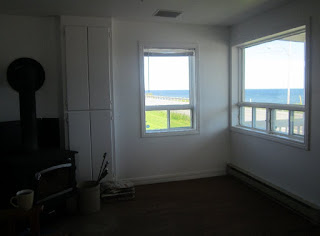 A long drive for such a short stay, but how can I not go, given the chance? 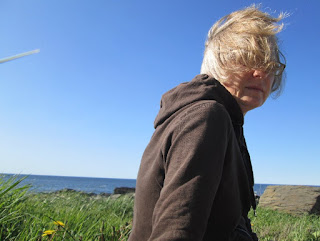