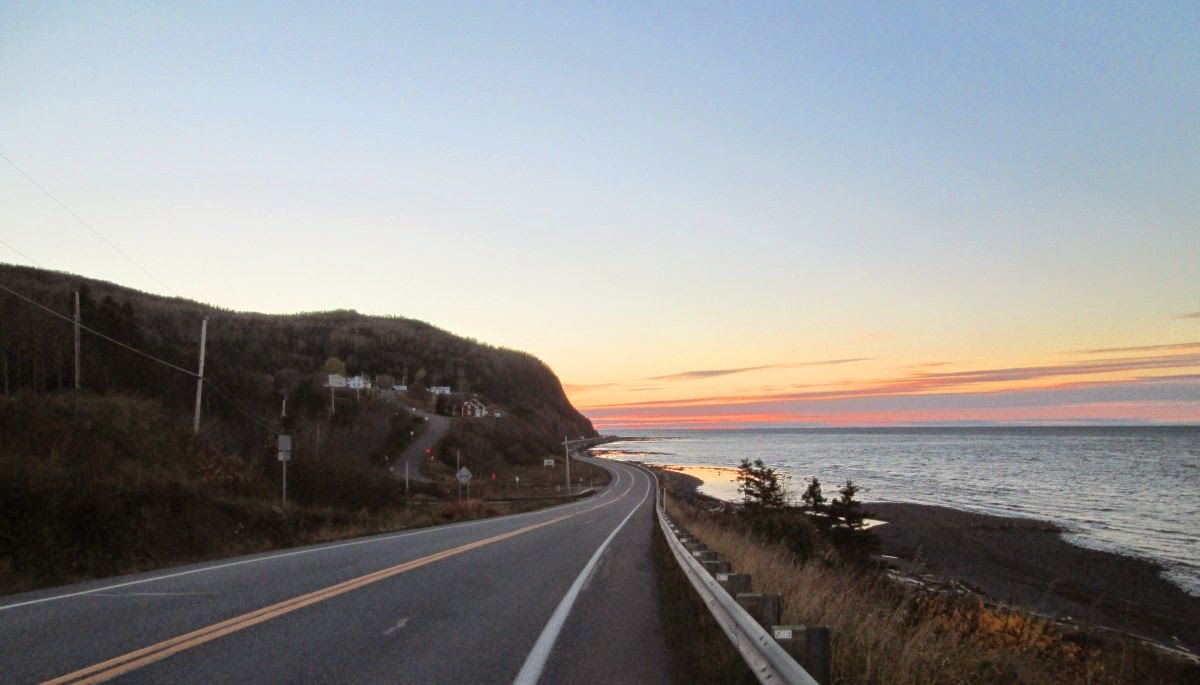 I told my doctor I was going to the sea and he said to collect sea glass. I'm not sure what bearing sea glass has on my thyroid, but I welcome these forays into non-traditional medicine.

On this last trip to the Gaspé, in late autumn, the water was rougher with whole tree trunks washed ashore. Sometimes we ended up clambering along rocks and still got splashed. 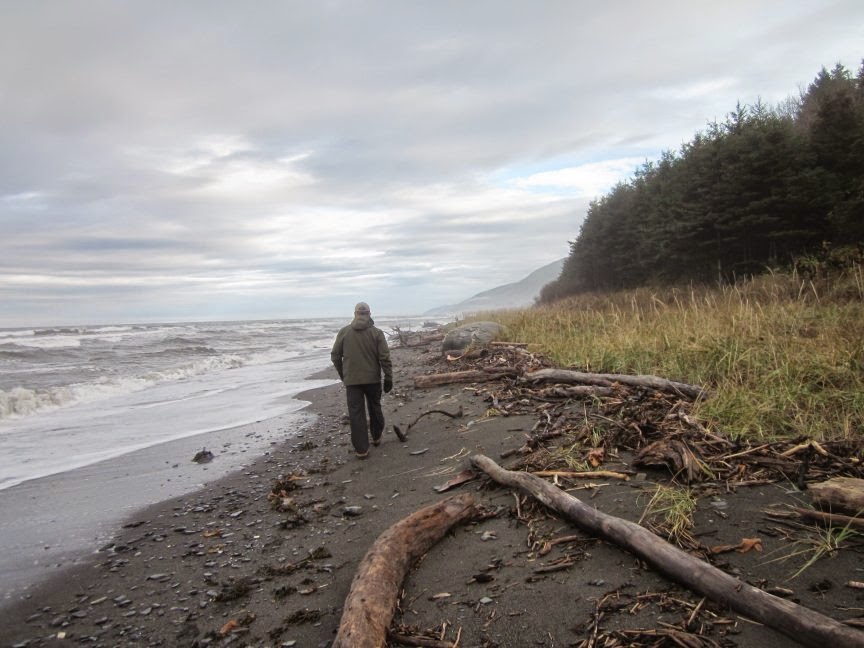 I don't know if my doc has rules about collecting sea glass. Whether it has to be a certain colour or shape or collected at a certain time of day. He grumbled about the prevalence of plastic in today's world--all too true--and how there soon wouldn't be any sea glass, only junk tossed up.
Indeed, there's always human litter. As small as tampon applicators, as large as car fenders. Sometimes a happy coincidence makes the litter cute. This piece of plastic did a stint as an ad hoc vase. The next high tide washed it away. 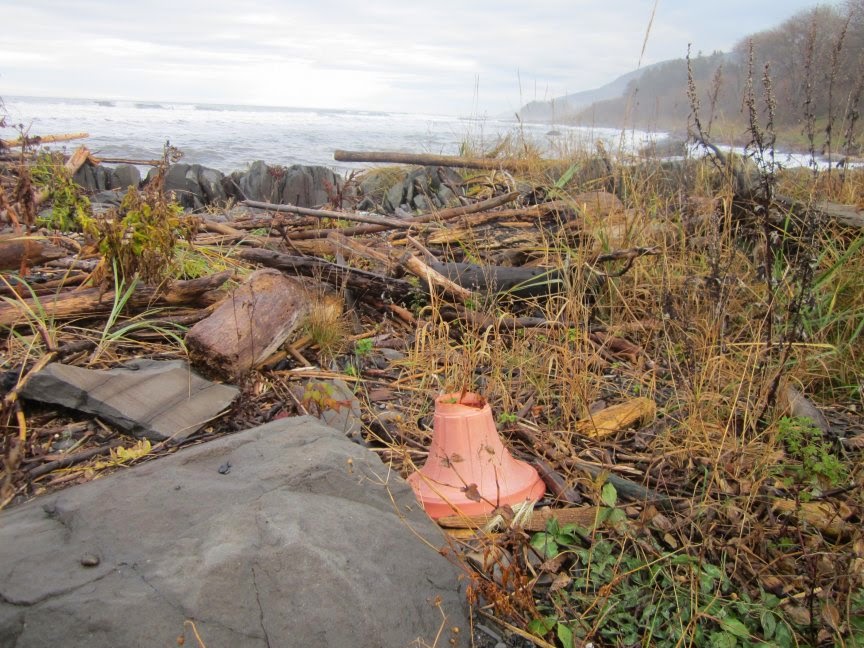 Sea glass isn't just broken glass--as in last week's bottle of Beaujolais tossed off a ship. The broken edges have to be smooth, the sheen worn away until the surface is hazed or frosted. For that to happen takes anywhere between 20 and 50 yrs of tumbling about in the waves. There are other factors too--pH, soda, lime... This man, Richard Lamotte, who began collecting sea glass for his wife who makes jewellery, has become a specialist.
http://www.seaglassjournal.com/articles/pureseaglass/lamotte.htm

I pick up glass because I do. I don't look for it. I see it now and then, stoop, examine it, slip it in my pocket. Back at the house, I drop it in a milk jug. I didn't bring it back to Montreal, so I hope my doc doesn't need it for further diagnostic study of my thyroid.

I don't take green glass because it's so common on the shore in front of our house. Though I will pick up green if there are letters or it's an unusual shape.

I do wonder where all the green comes from. It's a Heineken or Sprite bottle green, but there can't be that many people out there drinking Heineken and Sprite--20 to 50 yrs ago, remember. Especially in this province where domestic beer in brown bottles is more popular than imported. And where one of the pejorative nicknames for Quebecois used to be "Pepsis" because once upon a time that was the soft drink of choice here. Though who knows from how far away all that green glass washes in? Newfoundland? England? Sweden? Greenland?

The next most common glass is clear, which becomes white from its time in the sea, then turquoise then brown. Rare is yellow. I've yet to find red or orange. 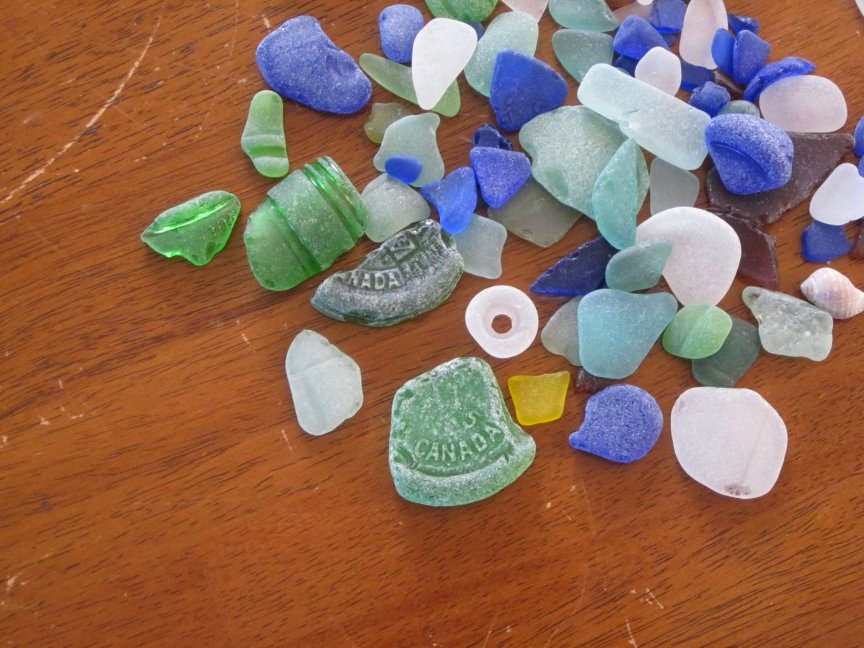 As always, we walked by the sea. We walked in the woods and hills behind the house.
I look for the last dying colours before the winter comes. 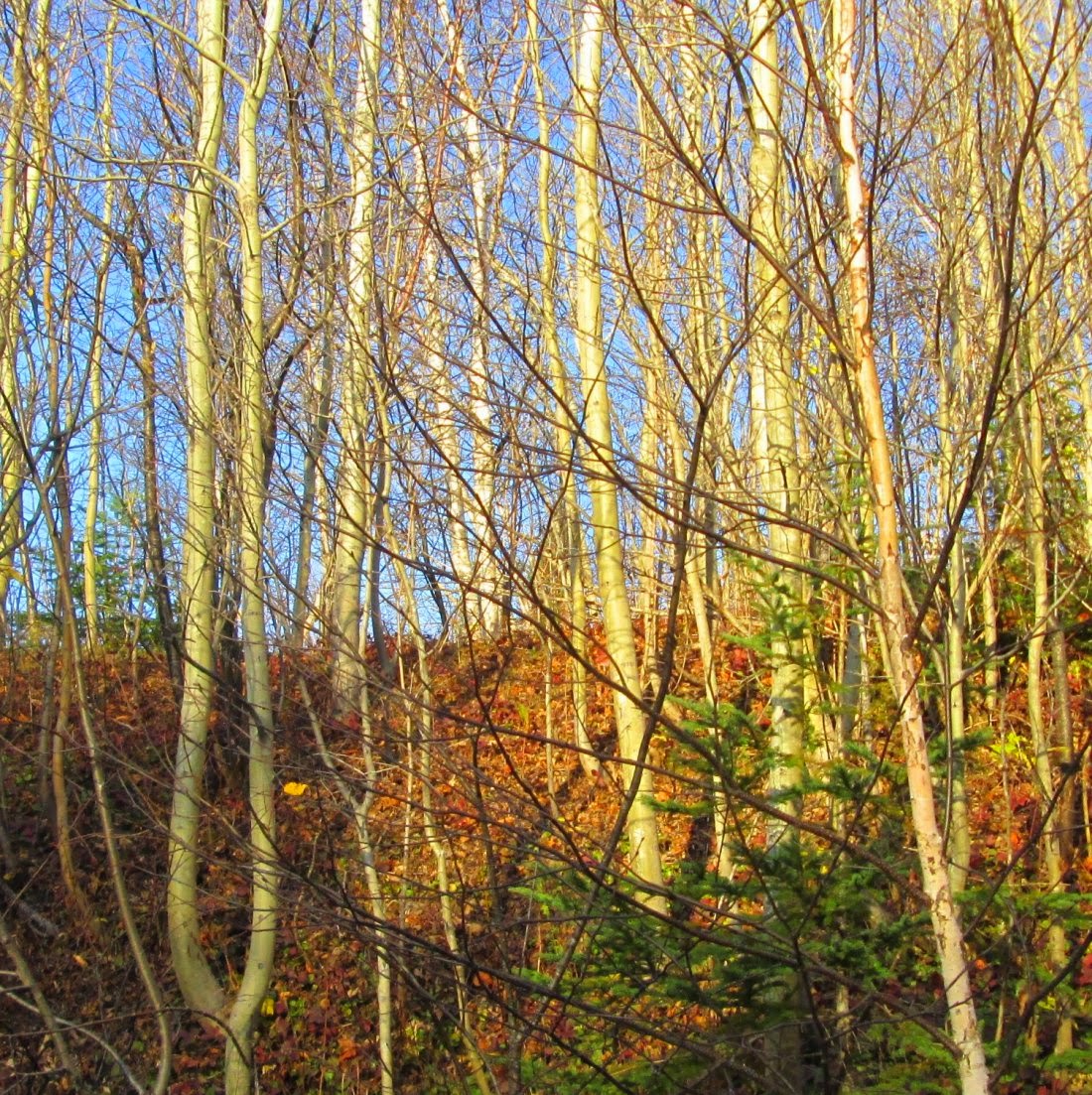 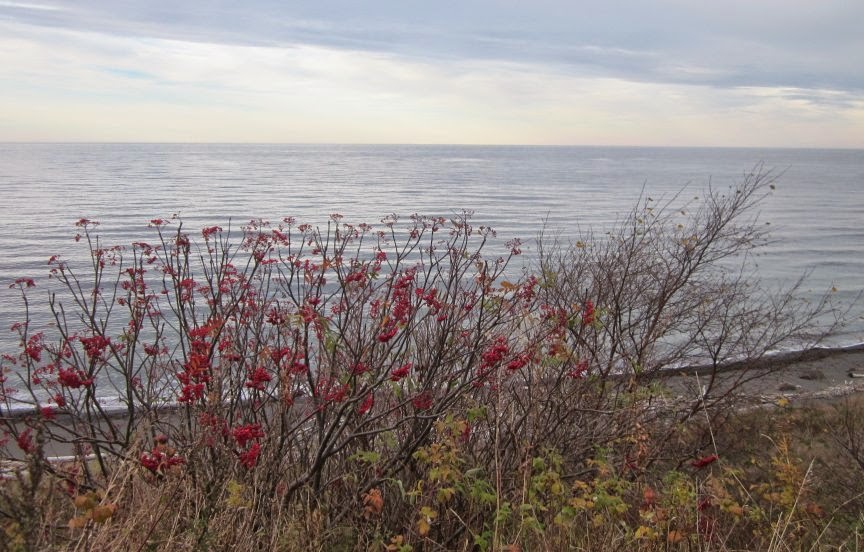 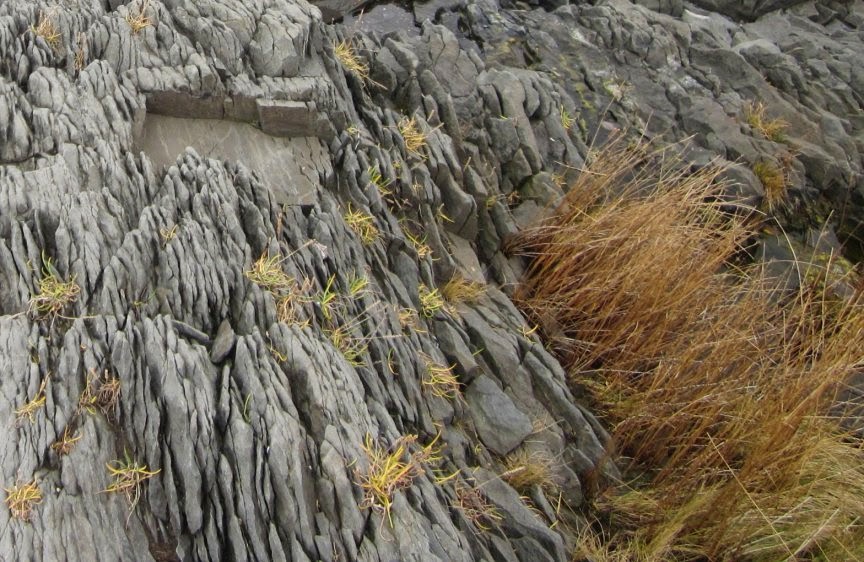 This stretch of coastline is my daily walk. It's low tide so the water is far out. I aim for the yellow house with the red roof in the distance, the perspective of receding hills, each a little more cloaked in mist.

Here's our neighbour's house. It's a cedar shingle house built maybe in the 1920s. Once--only once--she invited us in and showed us which room she was born in and where she slept as she was growing up. She was moved every time a new child was born. The coveted place during the winter was next to the stove pipe where it goes from the kitchen to the roof. She has the original tongue and groove cupboards in the kitchen, though she's painted the slats in alternating stripes of violet, cream, and lavender. I was dying to take pictures but that would have offended her mightily. She lives here alone, though her daughter has invited her many times to move to the city. "Not me." R asked about her husband. She scoffed. "Never needed one of those." 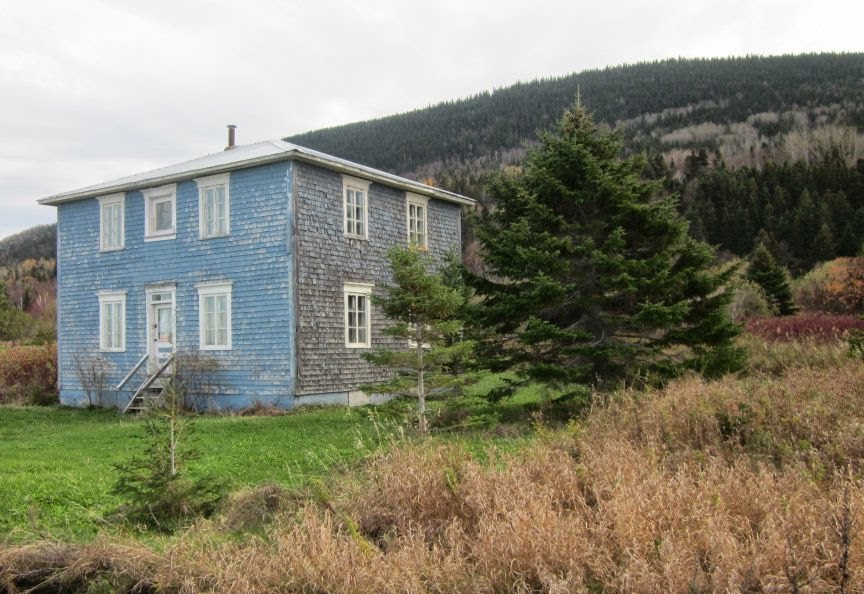 Work on the upstairs of our house is ongoing. R hammers and saws and curses for awhile, has a nap and picks up a hammer again. I worked on my writing and went for walks. I'm endlessly fascinated by the slosh and swoosh and smash of the waves. I've been coming to the Gaspé for more than 30 yrs and am still astounded by how high and low the tides are. (Such an inland geek.) Here is a huge boulder of pink granite that's almost covered at high tide. I'm behind it now--not crouched, I assure you. Standing on tiptoe. 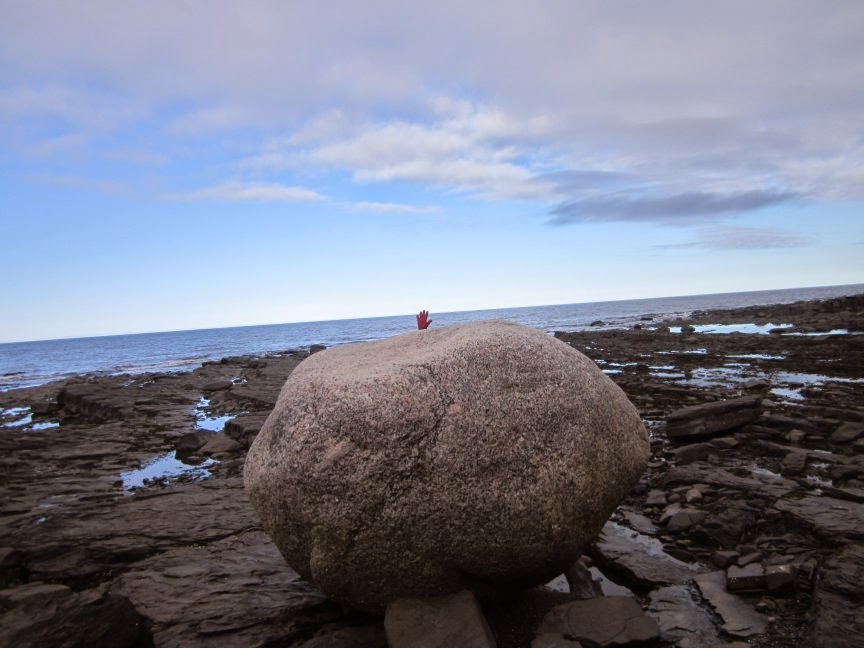 On our last day we got a foretaste of the monochromatic months to come. The hills are covered in mist. The snow is up to my knees. 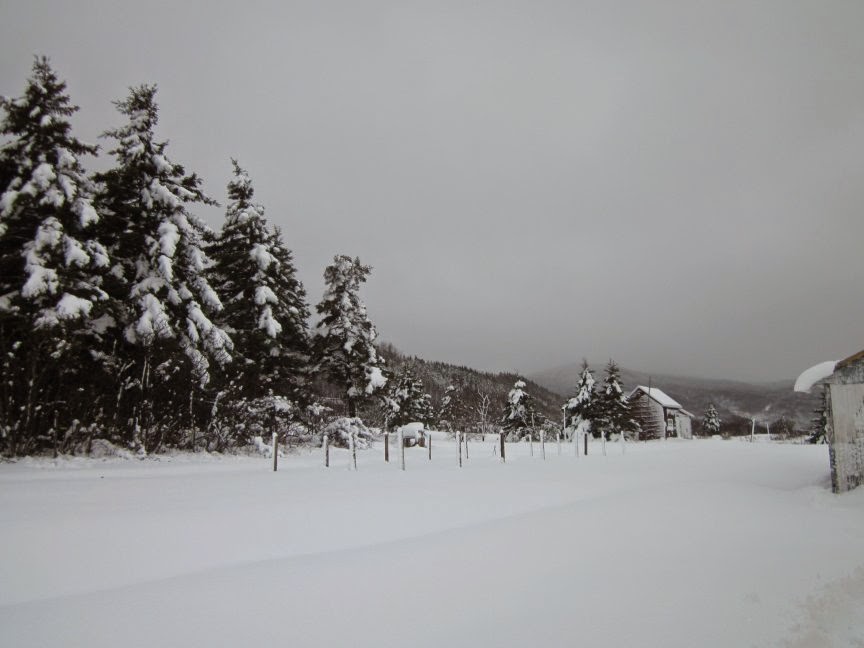