in the backseat of a car

I'm not about to unveil sexual memories. I have none that are framed by the confines of a car. There was always a bed or a sofa available. Or maybe I was always such a princess-aggravated-by-a-pea that I wasn't tempted unless the space was acceptably roomy. I've had people tell me about sex in cars and I've wondered why knees wedged between seats and door handles was in any way exciting.

My memories of the backseats of cars have to do with childhood. I began thinking about backseats when a friend told me about her son, a single child, ensconced in the backseat of a car with his cousins who began arguing. The effect was such that the next day, when another excursion was planned, the boy cried that he didn't want to go in the car. I don't blame him.

The backseat of a car is an arena for sibling torture--physical, emotional, psychological, perhaps even spiritual. The parents face ahead with their eyes on the road, pretending there's a wall between their kingdom and the peanut gallery behind them. They blank out squabbling and appeals for help, and can even ignore kicks through the upholstery.

The same amount of tension and drama at the table during a meal or in front of the TV in the living room would not be acceptable. For some reason, the rules for the back seat of the car are more lax. Every child with a sibling knows this. The bully becomes more of a bully. The weaker child milks pathos for all it's worth.

A couple of years ago I was in the backseat of a van with two boys, with the other adults and children in the seats ahead. The two boys (both whom I love, I should add) wouldn't stop jabbing and pinching each other. When the elder didn't pick on the younger, the younger needled him with a taunt. It was as vicious as it was childish as it was ongoing as it was stupid as it was cruel. I told them to stop but they knew I wasn't the adult who could punish them. I finally called ahead to the parents in the front seat. Oh yeah, I was the snitch. I'm still not sure if the boys have forgiven me, but gee, they were pushing buttons that had thick, deep-grown roots. I was one among four children. I knew all about backseat torture.

There were a few cars in my childhood. They were secondhand vehicles that my father refurbished, sanded, painted. The first one I remember really well was a Wolseley. I have a picture but it's too faded to scan, so here's a random Wolseley I found on the internet. 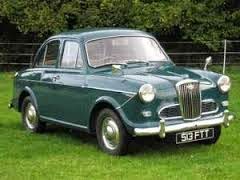 Ours was black. The backseat was as roomy as a sofa. I knew it well because I slept there when we did our weekend trips to the cabin. (My parents were European who, like many Europeans who come to Canada, have a fantasy about the Great Canadian North.) I did not like staying in the cabin, which was a single room with a table where we ate, my parents' bed, the sofa, the wood stove. At night, foam mattresses were pulled out for the children to sleep on the floor. I chose the Wolseley. I could read there. I could sleep there. I had no desire or skill at climbing trees or catching bloodsuckers as my siblings did.

When the Wolseley was replaced by a VW bug, which was too cramped for sleeping, I graduated to a tent, but since I didn't take it down between weekends, it got infested with trapped grasshoppers and sometimes snakes.

Four children in the backseat of a VW bug, travelling from the house where they lived to the cabin where they spent the weekend, was a trial--to be relived at the beginning and end of every weekend. This was before the days of booster seats and seat belts. If there had been such contraptions, our backseat scenario would have been illegal. Since I was the eldest, depending on what was packed in the car, I could sit in the compartment behind the back seat. Do you know what I mean? It was just large enough for two suitcases set upright. I had to sit with my legs drawn up--but I preferred it to being jostled, elbows and skinny bums with my siblings.

I mean, can you see us all in the backseat of a small car? 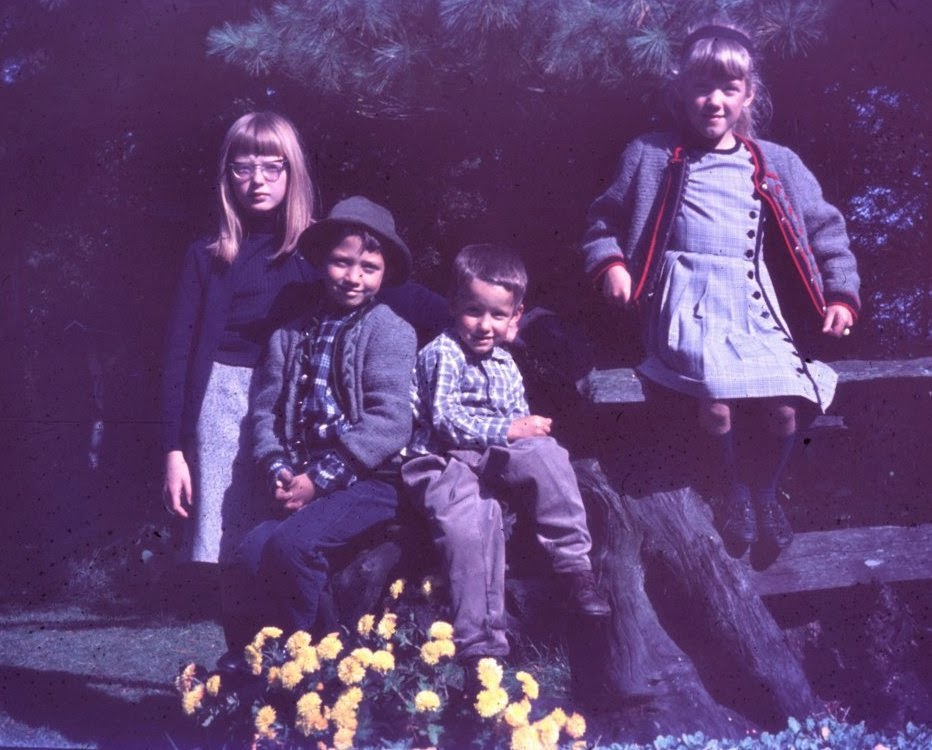