As the days grow longer, I want to go to the sea where I can walk on the beach and see my shadow stretched full-length and then some. 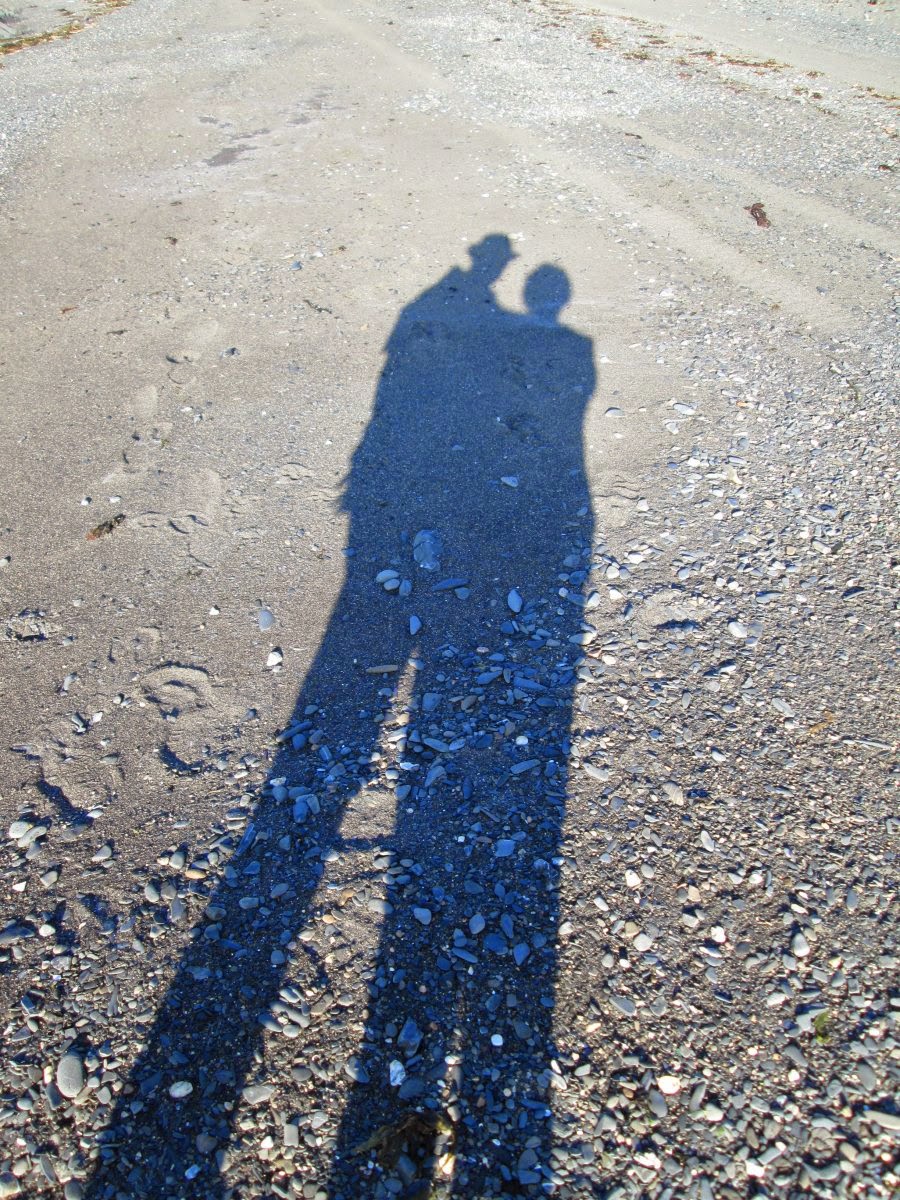 Here we are six hours northeast out of Montreal, having lunch in Sainte-Flavie. R is not shorter than I am. He's slouched after six hours at the wheel. 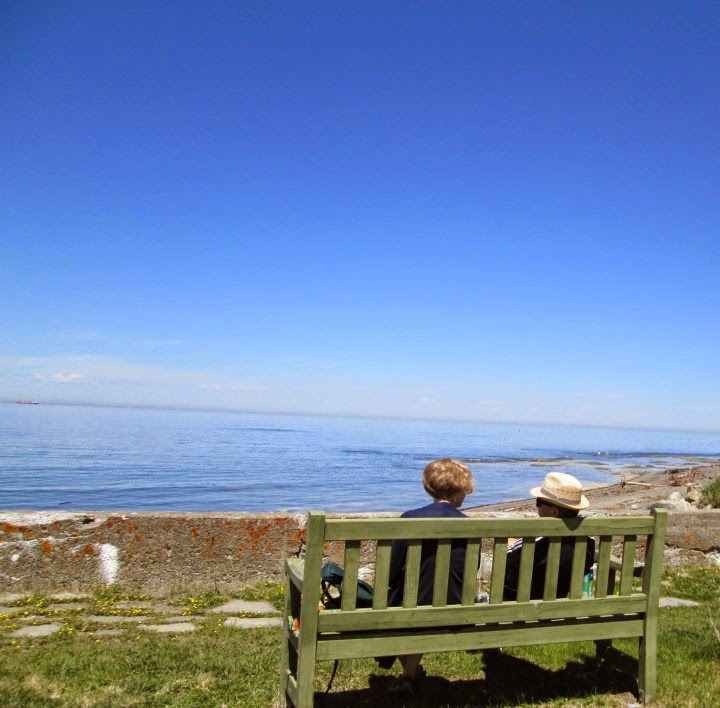 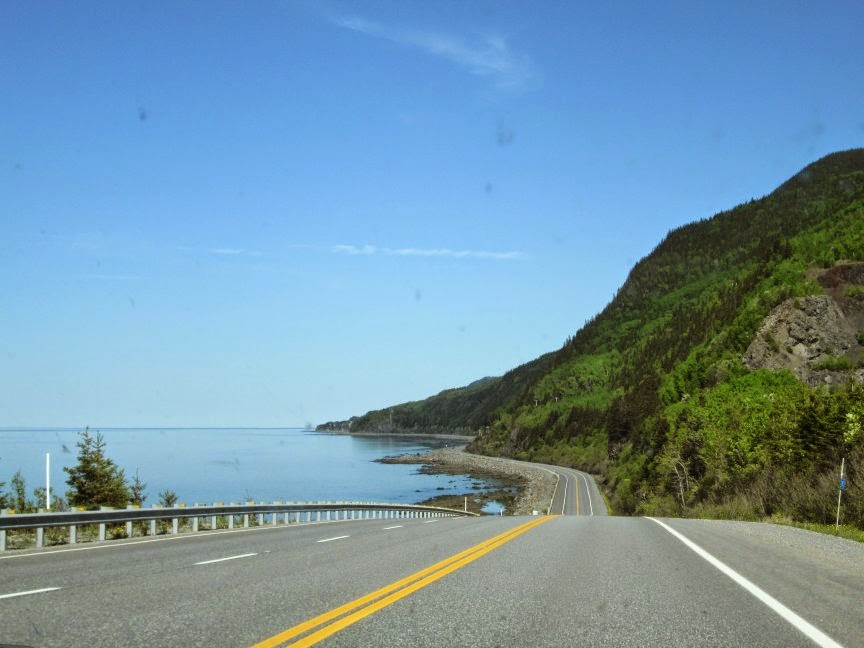 These hills are the tail end of the Appalachians, which in this part of the world are called the Chic Chocs. The name comes from the Mi'kmaq "sigsog".

This is the landscape I come for: big hills, big water.

We find the house intact, for which I’m always grateful. It’s left to fend for itself for months at a time. The winter was long here, with a greater than average accumulation of snow. Our neighbour tells us there was snow in the woods as recently as three weeks ago. The dandelions have only just started blooming—in mid-June—making up for their lateness by growing over a foot high. 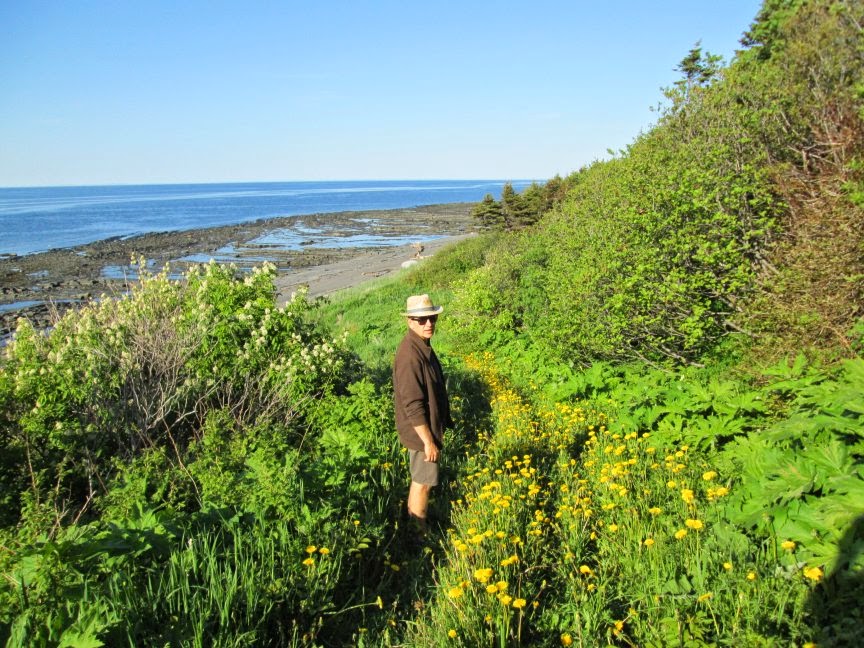 Here, we're walking down the cliff across the road from our house. It's low tide.
We go for lots of walks on the beach. Every cove or bay has a different composition of sand, shale, granite, blue mussel shells, white clam shells, no shells at all. 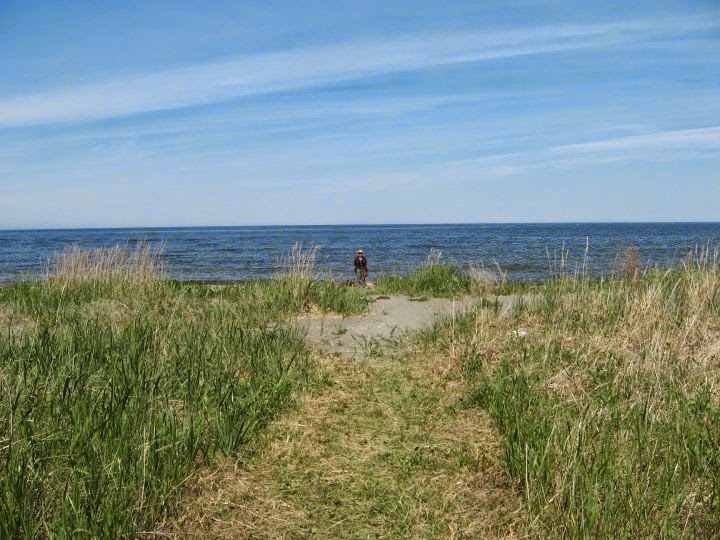 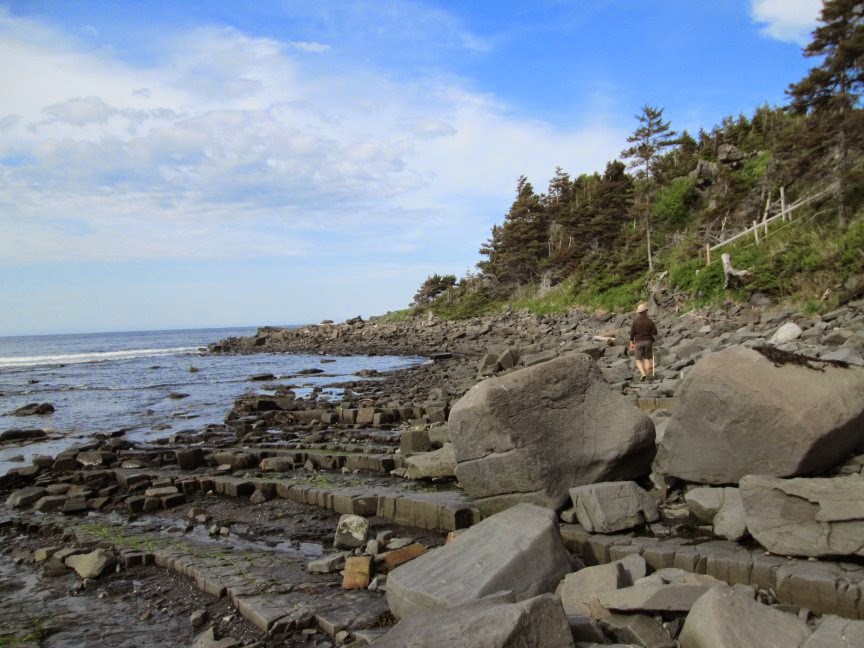 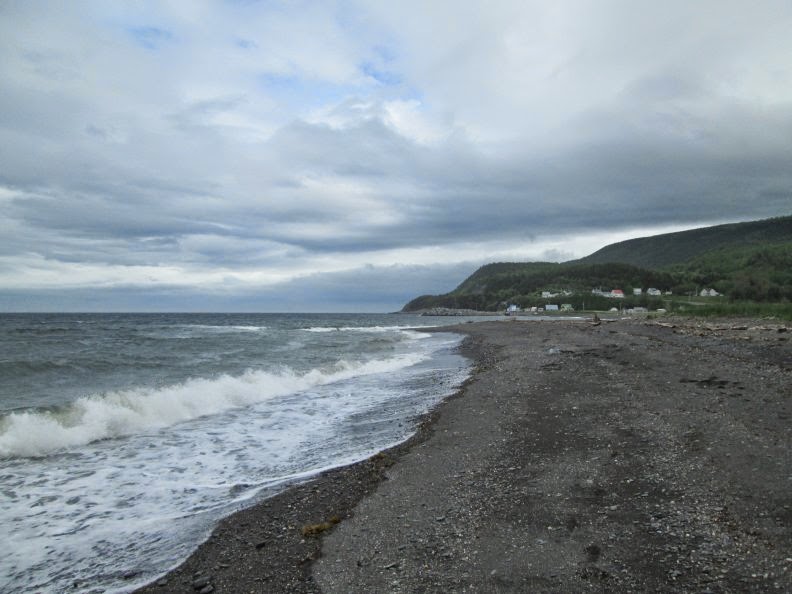 R found a Frida Kahlo driftwood ring he says he'll sand and paint and wear the next time we have a fancy occasion--someone's book launch or a birthday. He will have to wear it because it won't fit anyone's finger but his. 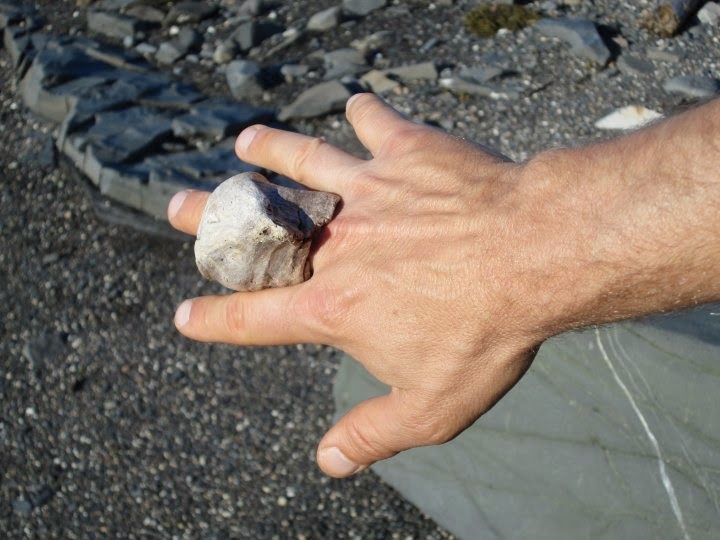 We take pics of rocks, fluorescent algae in low-tide pools, gulls that pose for us, stuff that’s washed ashore.

I think this is a piece of seaweed colonized by mollusks. At first glance I thought it was a pair of ladies’ evening gloves. With too many fingers.

There's even a bottle with a message! 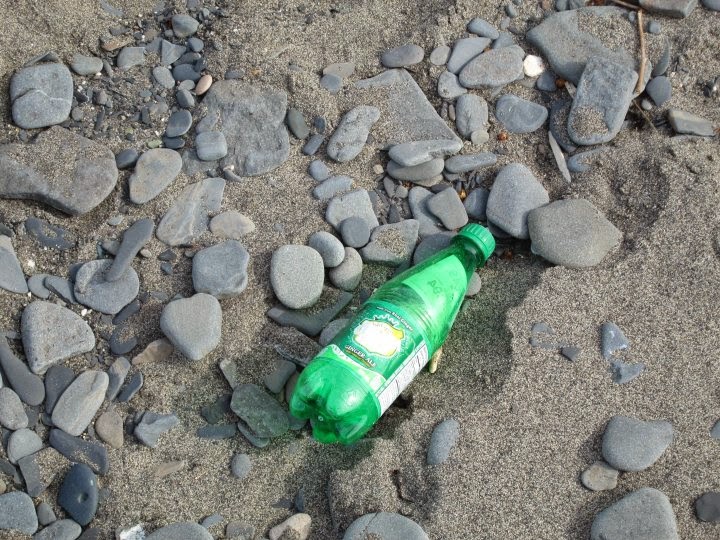 I manage to scoop the curled, damp piece of paper from the bottle, but it's only a receipt for entrance—to where? unidentified—dated Dec 2013. Too recent to be an artefact. The bottle gets relegated to the category of litter.

Until I was about 40, I’d never heard the word “lichen” said out loud. I thought it was pronounced to rhyme with “kitchen”. Then I got to know some poets and they use the word fairly often. I gather the concept of lichen is weighty with metaphorical significance. They pronounce it with a hard k—a homonym for the verb “liken” (which might be an insider’s joke, you never know with poets)—so that’s how I say it too now. 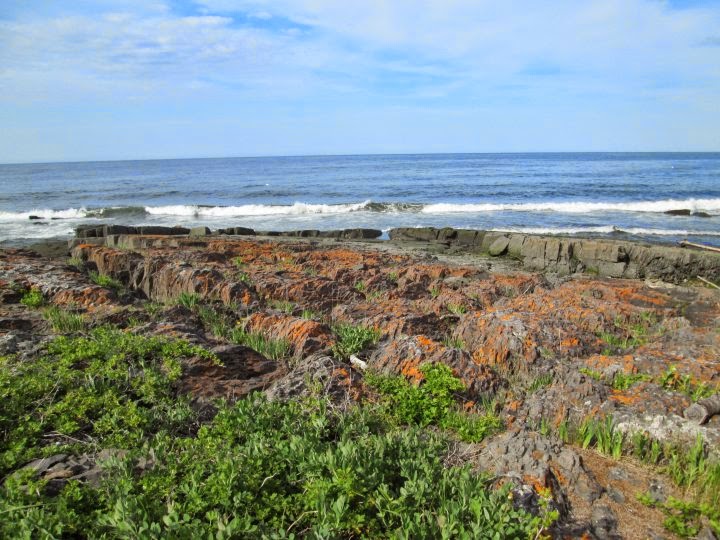 Here’s the closest village--that blocky squiggle at the base of the hills--which is about a 90-min walk along the beach from our house.  There is no store, no bank, no... name the convenience you can imagine most needing. There is a public telephone which is useful for us as we don’t have a phone at the house. 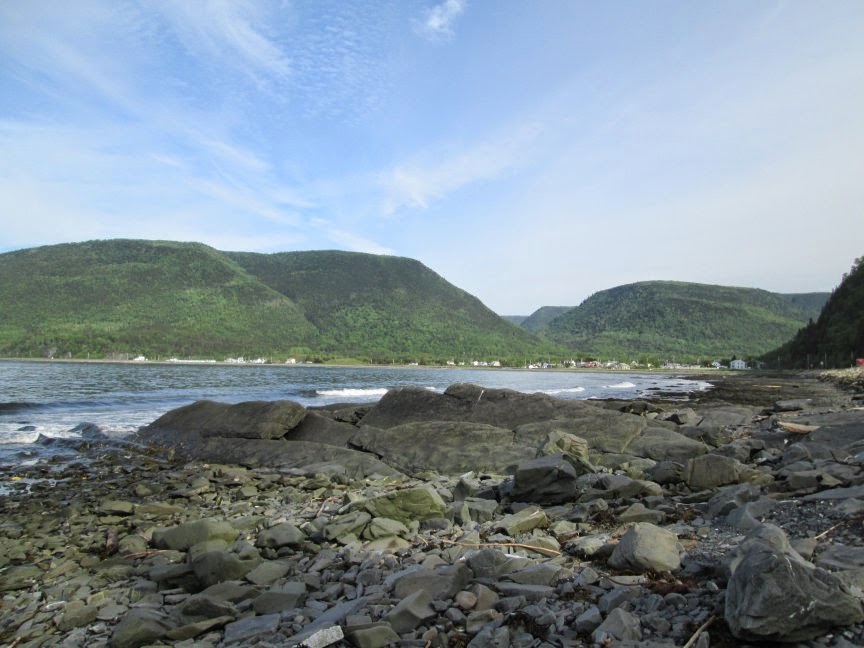 I asked R to take a picture of me on a boulder but then I had to find one I could manage to clamber onto. 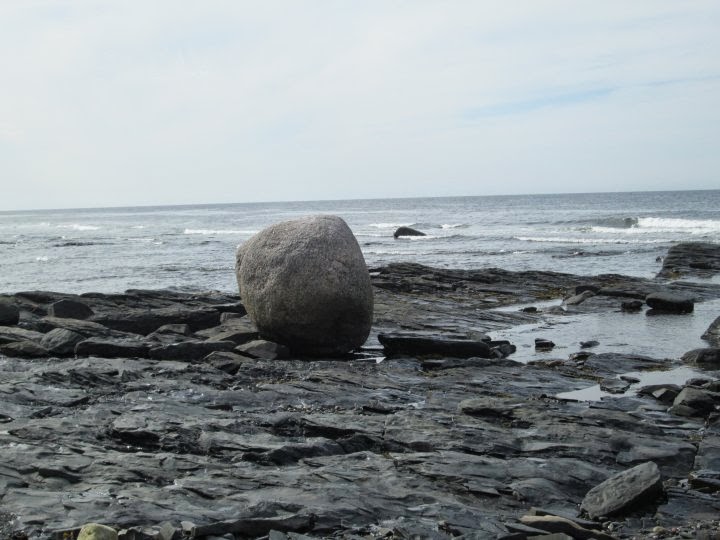 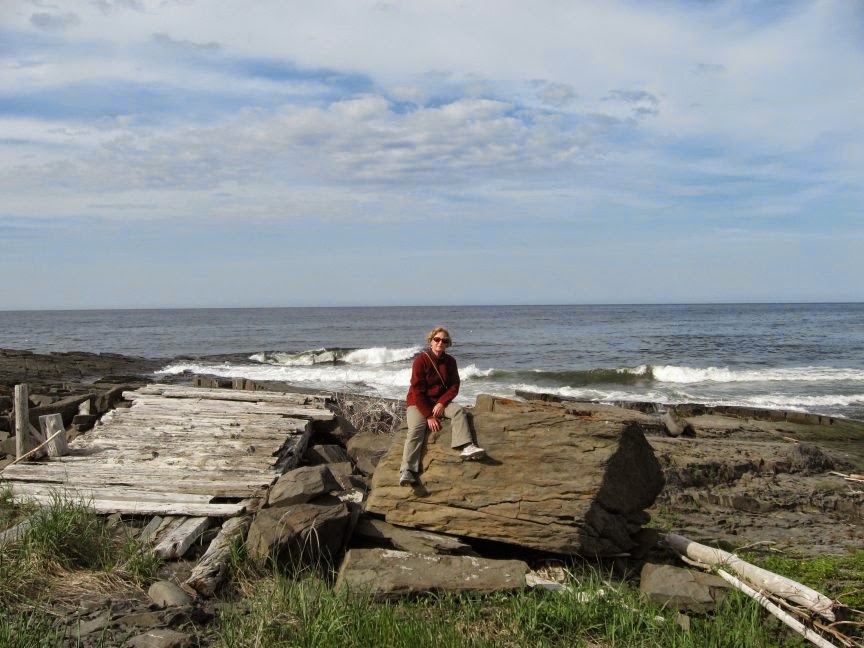 In Mont-Louis we stop at Café L’Arramé, which used to be a hangar or barn, now painted purple and refurbished as an organic café. I take a picture for my collection of interesting bathroom photos. 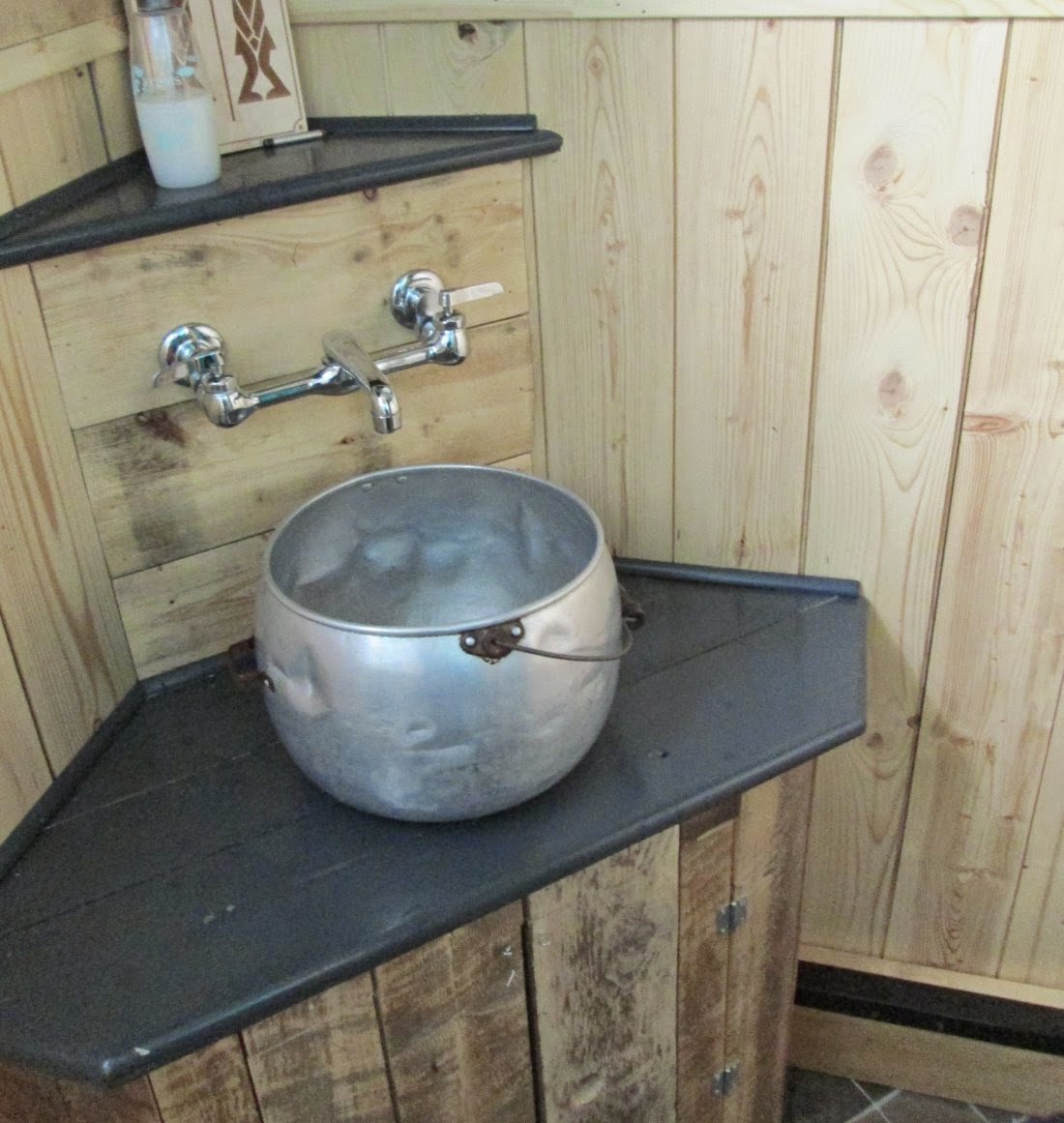 Work on our house is ongoing. The second floor has been gutted and is under construction. Here, just out of the frame, R is sawing ends of floor boards to try to widen the opening so he can get sheets of drywall up that darling, narrow stairway. The house was built at a time when people were shorter, slept in smaller beds, had smaller feet. I wear a size 7 shoe and I have to take the steps at an angle. 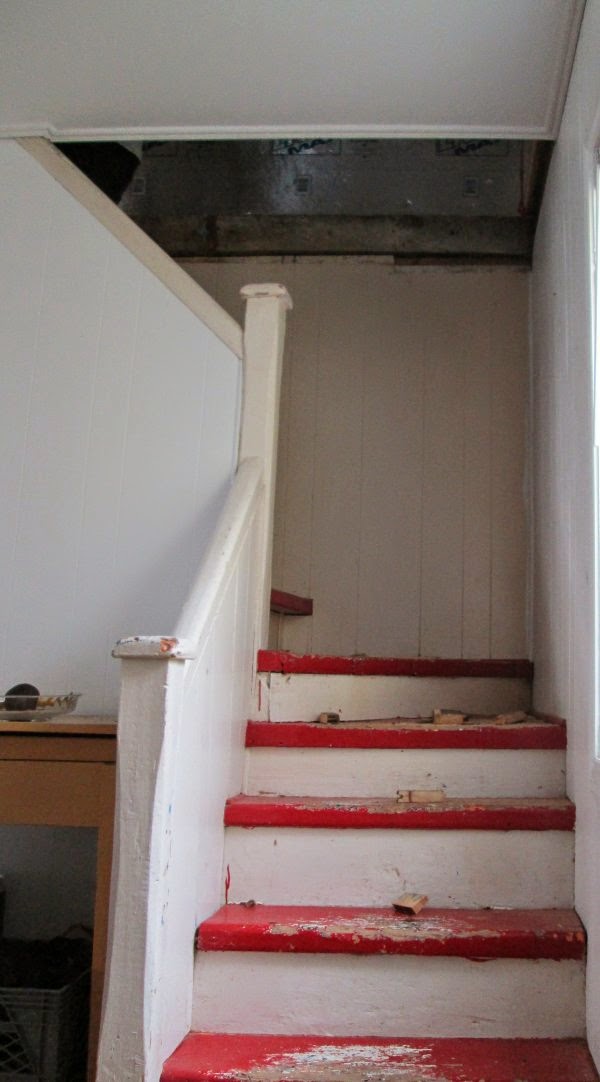 R makes a small fire and has a nap while I work on a story. 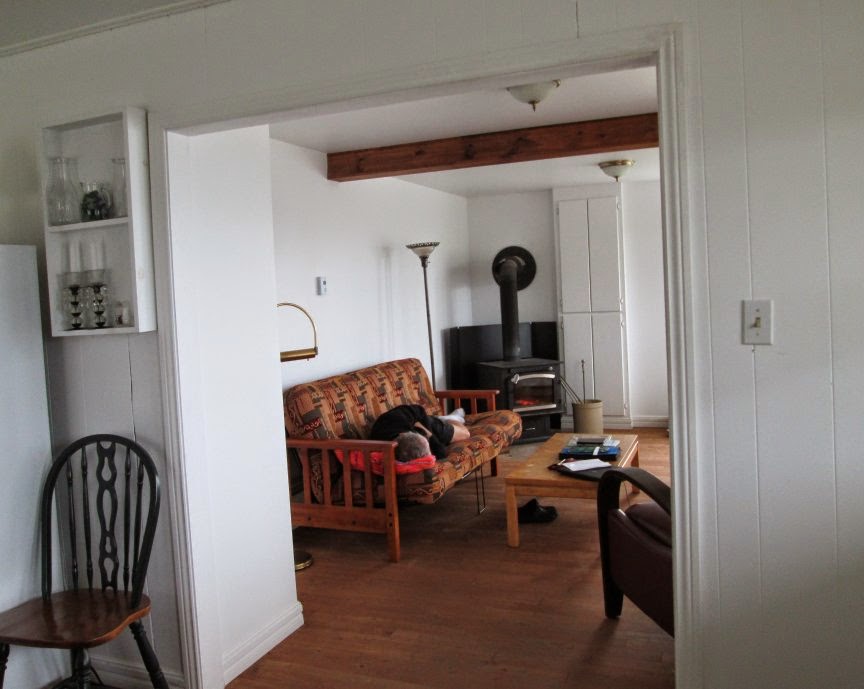 We go for a walk in the woods. 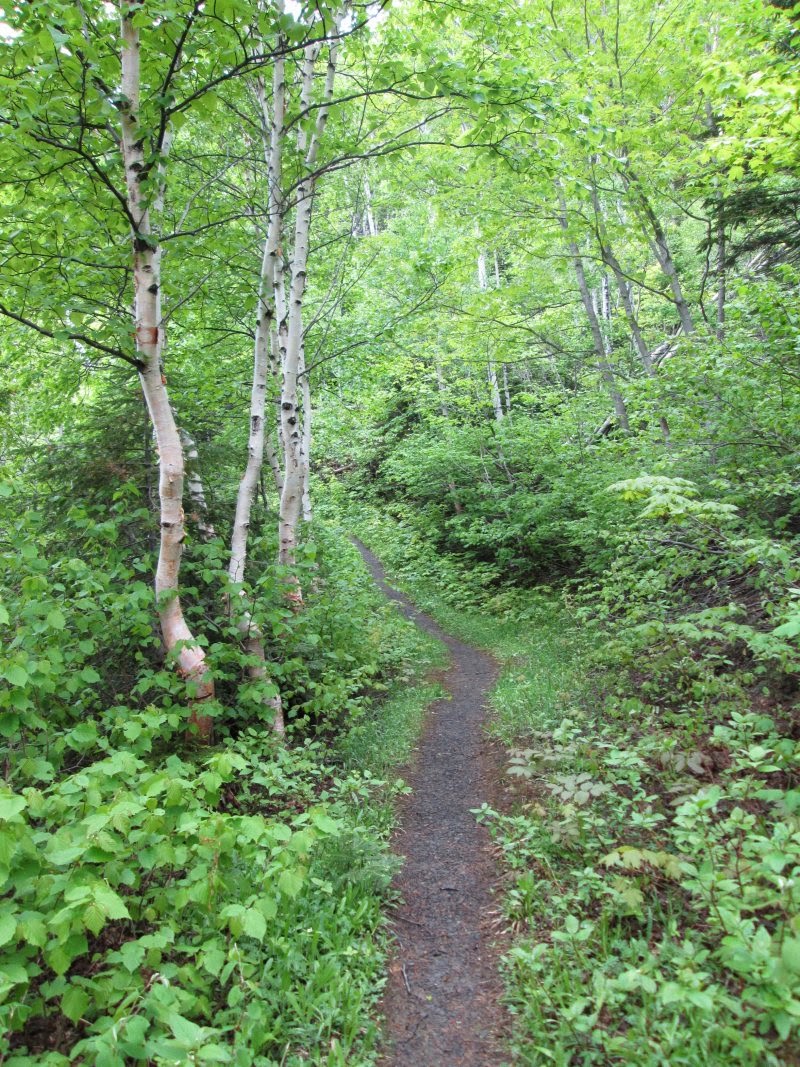 We poke through memorabilia left in the old shed. There used to be fishing equipment we couldn’t identify. Also carpentry and gardening tools—indestructible, sumo-wrestler versions of tools now made with lighter metals and battery-operated. R kept whatever we might one day use, including the nails that are still nails, even decades old in decades-old containers. Magic Baking Powder from the 1950s! 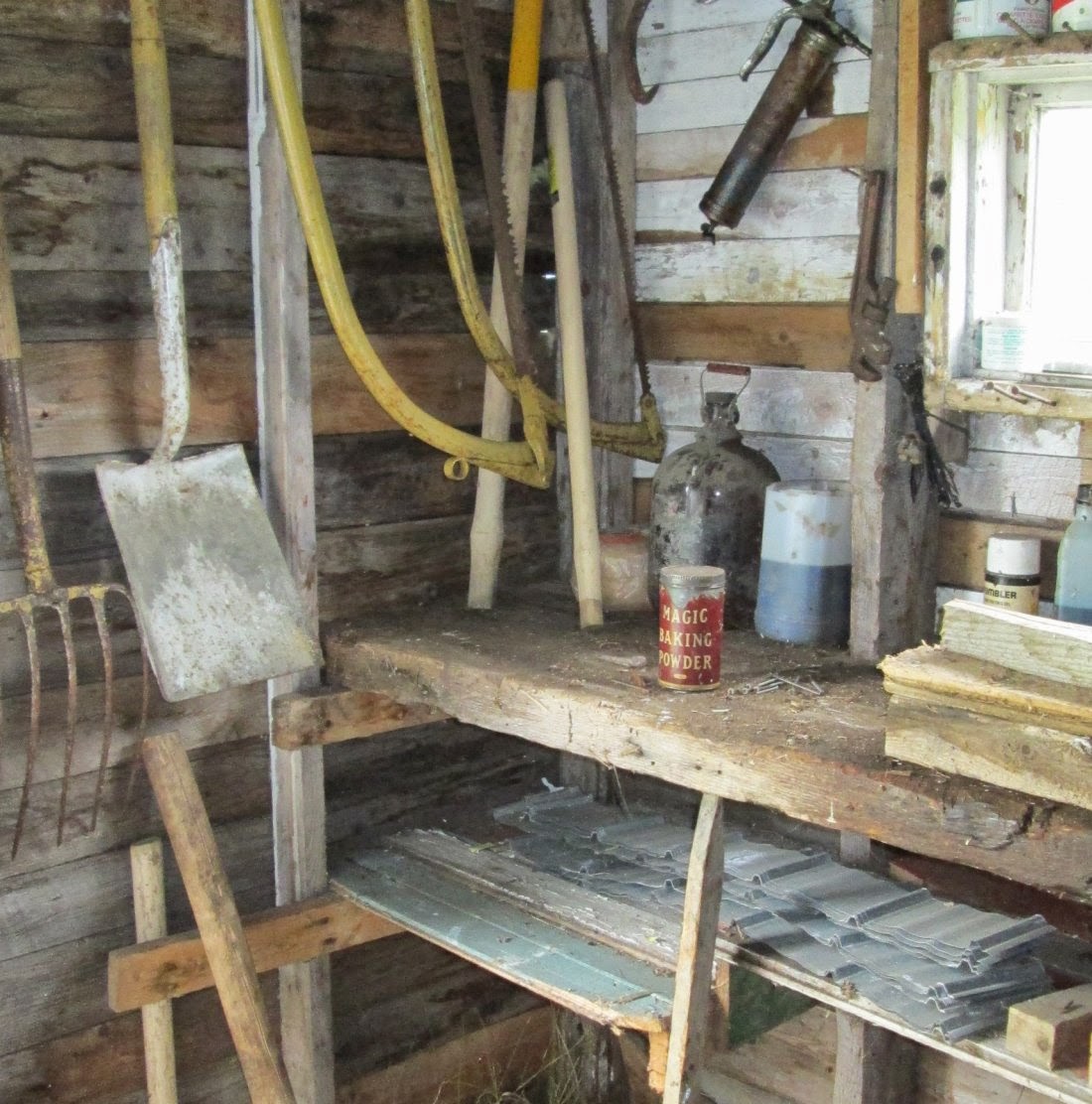 We sit on the verandah and watch the sunset and I take way too many pictures, though I know my cheap camera will never get the effect. But when I'm back in the city, the pictures will help remind me. 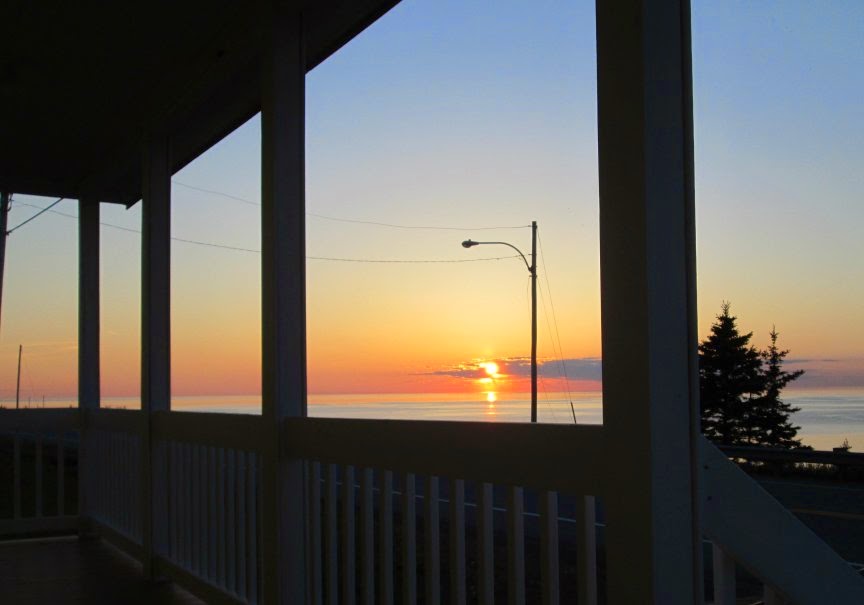