I'm home again. Montreal. It snowed last night and there wasn't a wind, so the branches on the tree outside my window have little puffs of snow on the tips. At a glance, I could believe those tufts are the buds of leaves--an urban version of pussy willows. But it's snow. Still winter, still cold. Snow in the crooks of the trees, along the cornices of the houses across the street. Snow on the electricity and video wires that keep the houses hooked up to world.

I'd had an idea--mistaken--that if we went to Winnipeg, winter in Montreal would feel balmy in comparison.

Winter in Winnipeg felt like a whole other creature. We were only there for six days. It was so cold that the children weren't allowed outdoors for school recess. Sidewalks weren't scraped of snow. Rather, a flattened path was scraped across the packed snow. Usually, when I walk outside in the winter and the snow squeaks, I know it's really-really cold. In Winnipeg I think snow starts out squeaky and goes up in register. Fortunately the prairie sun is so strong that it heats the bus shelters. Or the bus shelters are so cold that February sunlight feels like a source of heat.

When I was a grad student (decades ago), I wanted to write a thesis about the work of a 19th-century French critic and historian, Hippolyte Taine. Taine argued that the temperament of a people is formed by the climate in which they live. He made generalizations about flat, peaceful landscapes and Flemish painters, southern Italians and sensual paintings. The logic sounds simplistic. It is simplistic--and yet, when landscape and climate are so dramatic, wouldn't it somehow temper one's view of the world? 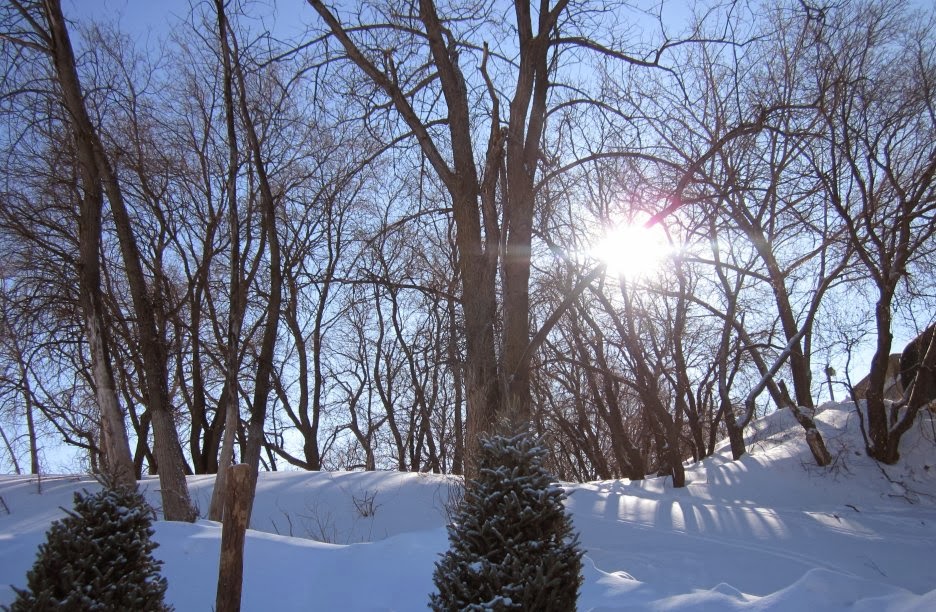 While I've been writing, a strong wind has started blowing, shaking the branches of the tree, sweeping snow off the rooftops, swirling a whiteout. It is still winter.
Posted by Alice at 9:13 AM